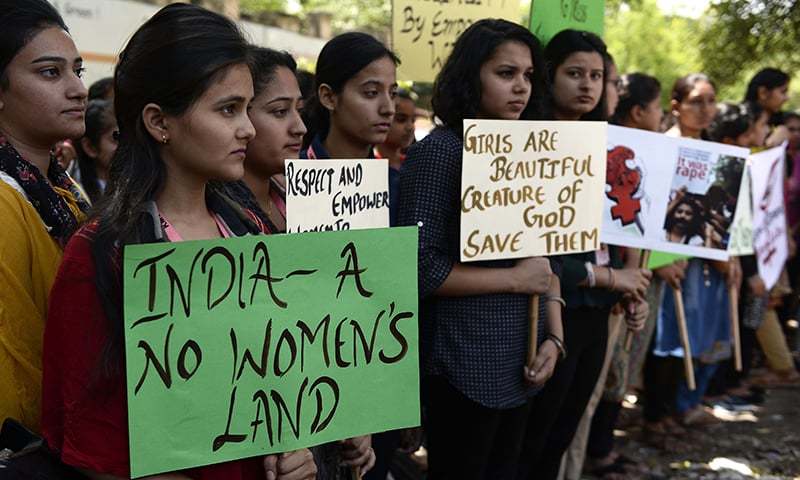 Indian students take part in a protest in Jalandhar on April 16, 2018, over the high profile rape cases in Jammu and Kashmir and Uttar Pradesh states. Indian police have made another arrest after the alleged rape of a teenager by a ruling party politician sparked protests across the country, federal investigators said April 15. / AFP PHOTO / SHAMMI MEHRA
AnalysisCriminal Justice SystemCriminal LawLeaflet SpecialsLife and LibertyProtection of Children from Sexual Offences ActRule of LawSexual OffencesWomen's rights

Rape as Seduction: A Little More than Persuasion

The language we use is not just a neutral medium of communication but a way to structure our thoughts as well. SHIVANGI DESHWAL describes the recent ruling in the Chavan bail case from the prism of language and the need to redefine it to give women agency to define their reality and freedom.

The courtroom hears both sides.

The recent “will you marry the victim” query posed by the Supreme Court is an obvious immediate response of this kind by a judge of an Indian court. This author wrote on the issue earlier, but the oppression and patriarchy that underline the statement need reiteration.

In asking “will you marry the victim”, the fact that women’s oppression lies in male control over language remains the same.

Mohit Chavan, a 23-year-old technician in the Maharashtra State Electric Production Company Ltd, is accused of raping a minor. The subsequent courtroom exchange related to it has invited many protests.

The details of this grotesque case are that the accused stalked the victim when she would go to school. The victim and accused are related. The grandfather of the girl also chided the accused for frequently showing up near her house.

When the victim’s family was away from home, the accused entered through a backdoor, gagged her, tied her up, and had forced sexual intercourse with her. He threatened the victim that he would “throw acid on her face and [then] no one will marry her”.

He also threatened he would “tie her brother on the railway tracks” with help from “hooligans from Mumbai”. The accused would carry petrol cans on his motorcycle and would pour them on her.

The rapes continued. The victim tried to end her life. When she and her mother were on their way to complain to the police, the mother of the accused intervened and said they should make the victim her “daughter-in-law”.

Allegedly, a notarised undertaking was drawn up according to which when the victim turns 18, the promised marriage would be conducted. However, the accused and his mother refused when the time came.

Despite such a grotesque and violent series of crimes against the victim, when in the courtroom Chavan’s bail came up for hearing, the CJI said, “You [Chavan] should have thought before seducing and raping the young girl. You knew you are a government servant. We are not forcing you to marry. Let us know if you will, otherwise you will say we are forcing you to marry her.”

It is shocking that during the trial of rape of a minor, anyone should suggest that the accused marry his victim. The patriarchal social structure and cultural notions of shame, female sexuality, and virginity are the basis of the intention to ask the rape victim to marry the accused.

Marriage, in these situations, becomes a compromise in a criminal rape case. It becomes a way to escape conviction, protect the father’s daughter’s virginity, perpetuate the status quo, and forget the violence of rape and remember only the sexual intercourse.

Fortunately, the Supreme Court recently issued guidelines about gender sensitisation and desisting from gender stereotyping in judgments. The court specifically said, “the idea of compromise, especially in the form of marriage between the accused and the prosecutrix is abhorrent, and should not be considered a judicial remedy, as it would be antithetical to the woman’s honour and dignity.”

Further, it noted that “promising to marry the survivor, and further, granting bail subject to such conditions, renders the court susceptible to the charge of renegotiating and mediating justice between confronting parties in a criminal offence and perpetuating gender stereotypes.”

The court held that using language that diminishes the offence and trivialises the survivor is avoided under all circumstances. This was a much-needed intervention, considering the Chief Justice of India has used the language of “seducing young girl and raping her”. This male control of language is rooted in oppression and patriarchy and needs challenging.

The crime of rape, used in conjunction with the word “seduction”, assumes that violence can, and often is, a part of consensual sex. So, “no” does not always mean “yes”; no often means yes and no at the same time. This ambiguity suggests what took place is seduction and not rape. It suggests the ideal woman is chaste, pure, and passive, which prevents her from acting on desire. Hence, she wants to be “taken”.

To use “seducing” and “raping” in the same sentence seems to collapse one into the other, removing the violence from the situation. It suggests that what took place was “a little more than persuading” but perhaps a little less than rape. A similar situation occurred in Thomas Hardy’s Victorian novel, Tess of the d’Urbervilles, of which critics have said, “Hardy’s view is of rape as an extension to seduction”. The picture drawn here is that of a protest giving way to deeper desires, followed by regret, but not rape.

CJI SA Bobde’s language speaks through the voice of socialisation. Dale Spender, in her book, Man Made Language, argues that male control is exercised through the language we all use. The idea is that language is not just a neutral medium of communication but a way to structure our thoughts as well. Language, which is based on male points of view and perspectives, cannot accommodate women’s experiences.

Thus, the basis for women’s oppression lies in male control over culture, language, and knowledge. Language itself limits how we think and leads us to internalise patriarchal assumptions, whether we are women or men.

The French philosopher Michel Foucault and Jacques Lacan, the well-known psychoanalyst, have argued that reality is mediated by language and experiences. Reality is different for each of us, not objective or impersonal but rooted in subjectivities. Therefore, Bobde’s translation of rape into “seducing a young woman” is a reflection of patriarchy in a man who is functioning within the realm of the notions it upholds about female sexuality and family honour.

The social location of judges and their caste, class, and race cannot be divorced from their judgments and how they view any criminal act. The language of a judgment is an extension of the subjective truths and reality of those who pass it. In other words, the “objectivity” of a judgment reflects the subjective perception of the judges.

Language remains a site of political struggle for feminists. Women cannot rid themselves of patriarchal control unless experiments with language become the centre of attention. Male control over language is not simply a question of words used in judgments and their meaning but of the structure that embodies them.

These are structures we wish to redefine, that we need to break away from, that does not force a rape survivor to marry the accused. In short, we need structures that return women their agency, so that she defines her reality and freedom.

(Shivangi Deshwal is a trained feminist social worker. The views expressed are personal.)