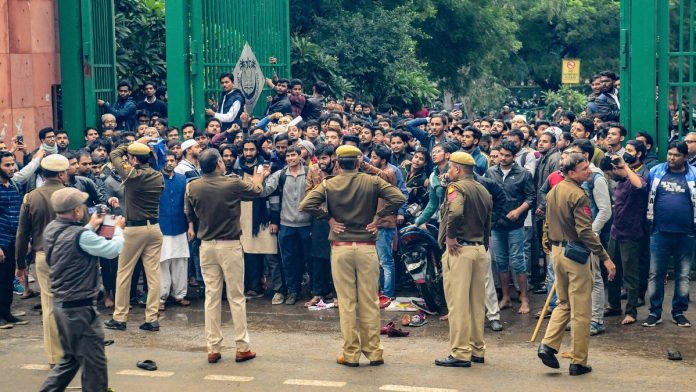 AS flawed as the ‘coupled’ instruments of National Register of Citizens (NRC) and Citizenship Amendment Act, 2019 (CAA) is, what is even worse is the current government suppression of the freedom of protests against these.

Right to protest and dissent is fundamental to a very foundation of the Indian democracy. The recent heavy hand of the central police forces at Jamia Millia Islamia (Jamia University) and Aligarh Muslim University (AMU) is an attack on these very foundations.

A long night of protest and brutality

Last night, to quell the students protest against the unconstitutional CAA, police personnel and security forces entered the campuses of AMU and Jamia university and lobbed tear gas shells inside campuses and beaten up students. As a result of the unprovoked lathi-charge, many students were injured and admitted to hospitals.

Moreover, the Delhi Police illegally detained the injured students at the Police Station of Kalaka ji and New Friends Colony for hours. The police did not allow the lawyers and the families of the injured students to meet them. Only after repeated requests, the police allow two people to meet the students. Social activist Harsh Mander and Advocate Ali Zia Kabir Chaudhary were although allowed to meet the students, however, the police did not permit them to carry their mobile phone, any personal items. Advocate Chaudhary reportedly said that “there was a tacit understanding that they would record no statement or take signatures on any document, including any Vakalatnama”.

The students were released after the Chairman of Delhi Minorities Commission, Dr Zafarul Islam Khan wrote to the SHO Kalaka ji Police Station to release the injured students of the Jamia University.

Public Relation Officer of Al-Shifa Hospital in Okhla, where injured students were admitted, told The Leafletthat there were over 100 casualties between yesterday and today, however, only 6 medico-legal cases have been registered on the insistence of their lawyers.

The Supreme Court agreed to hear a petition concerning violence that took place in Jamia University and AMU on December 15.

Senior Advocate Indira Jaising mentioned the case before the three-judge bench presided by Chief Justice of India (CJI) S A Bobde to take a suo moto cognizance of the violence that is unleashed on the students across the country. She said, “When the Police and lawyers had clashed in Delhi, the Delhi High Court had taken suo moto cognizance. Request the Supreme Court now to take suo moto notice of the violation of the human rights of the students”.

Senior advocate Colin Gonsalves also submitted before that the condition of the injured students who were detained by the Delhi Police without giving any medical assistance. He also informed the Court that the armed security personnel entered the hostel rooms and library without authorization.

After a brief hearing, CJI Bobde said “Public property is destroyed, buses are being burnt… It doesn’t matter by whom. We will decide in a cool frame of mind. We will hear the matter and see what can be done. Prima facie I don’t think Court can do much, it’s a law and order problem”.

“We will determine the rights but not in this atmosphere of riots… the riots must be stopped”, CJI Bobde added.

On the other hand, the Delhi High Court refused urgent hearing of a plea against police brutalities on students protesting at Jamia university and asked the petitioner to move the plea through the registry.

The petition was mentioned before a bench presided by Chief Justice D N Patel by advocate Rizwan Nazmi who sought a judicial enquiry of the incident and asked the court for a direction to provide medical assistance and compensation for the injured students.

#LIVE: IIT-Bombay students protest against the atrocities on students of #JamiaMilia and #AMU despite refusal of permission by Dean-students affairs for march #JamiaProtest @IndianExpress @ie_mumbai pic.twitter.com/SWjlq5BBIX

Students of TISS Mumbai start protest in solidarity with the students of Jamia Milia Islamia and Aligarh Muslim University. Shame on Police for their brutal use of force against students by barging into University campuses.
@FahadTISS @_YogendraYadav#ResignAmitShah #CAAProtests pic.twitter.com/8f3ihvkaIG

BHU with stands in solidarity with AMU and Jamia students. A law like Citizenship Amendment can not be part of India which Ambedkar and Gandhi believed.

IIT Madras students protested against CAA and NRC and have expressed their solidarity with the students of AMU, DU and JMI.#Long_Live_Students_Unity#IITM_Against_CAA_NRC#IITM_In_Solidarity_with_AMU_JMI_DU pic.twitter.com/NFTT6kPrEV

Students gathering at #IISc #Bangalore in solidarity with besieged students of #Jamia and #AMU pic.twitter.com/OtibSlJBiB

AIIMS Students Union condemns the police brutality on innocent students of Jamia Milia Islamia, New Delhi. All students must stand up, resist the rise of dictatorship. No one is safe now, not even inside universities. #JamiaMilia #ShameOnDelhiPolice #BlackDay pic.twitter.com/AEjbY44koF

The student bodies of NLS, Bangalore; NUALS, Cochin; MNLU Mumbai, NALSAR, Hyderabad; MNLU, Nagpur, HNLU, Raipur; NLUO, Cuttack; and NUSRL, Ranchi have also extended their support to the students of AMU and Jamia University and condemned the violence and use of force against protesting students.

NLS, NUALS, MNLU Mumbai, NALSAR, MNLU Nagpur, HNLU, NLUO, and NUSRL student bodies have extended their support and condemned the violence and use of force against protests by Aligarh and Jamia Students . #JamiaProtest #CitizenshipAmendmentAct pic.twitter.com/CjdYMjvgCJ

Protests are raging across India since the controversial CAA was passed through the parliament. Students are of the nation, they must protest, peacefully. And they must be heard and responded to.