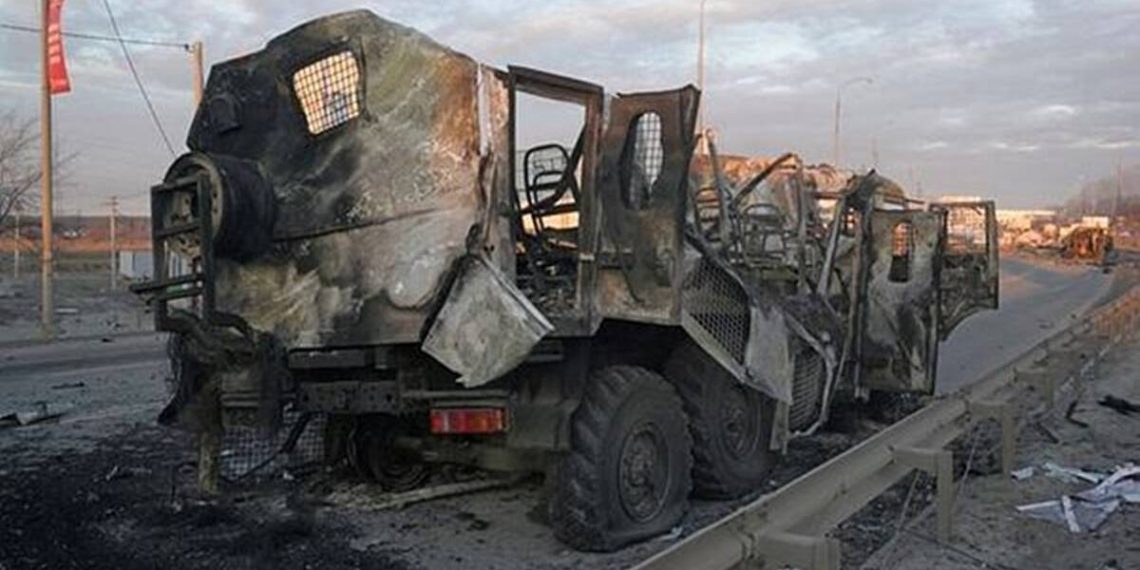 International Law violations by Russia in its invasion of Ukraine

In its illegal invasion of Ukraine, Russia is guilty of violating international law on many grounds, explains RAUSHAN TARA JASWAL.

“There is no purgatory for war criminals, they go straight to hell.”

AS the world grapples with the severity of the unprovoked, unjustified, and illegal invasion of Ukraine over the past week, the question of the hour seems to be about international law violations committed by Russia.
The situation between Russia and Ukraine has been a tinderbox since 2014, ever since the annexation and occupation of Crimea, a south-eastern Ukrainian province by Russia. This tinderbox exploded this week when the Russian President ordered a ‘special military operation’ within Ukraine, a sovereign nation. The pretext of the said operation was initially to honour the Minsk Agreements (in the aftermath of Crimea annexation) and to ‘liberate’ and ‘defend’ the Donbas region and the people of Donetsk and Luhansk – breakaway regions located in the south-eastern parts of Ukraine. Apart from other reasons, the highlight of Russian President Vladimir Putin’s speech was to stop the expansion of the North Atlantic Treaty Organisation (NATO) towards Eastern Europe. In his speech, he also invoked Article 51 of the UN Charter, which enshrines ‘inherent right of individual or collective self-defence’ in order to protect Article 1 – the ‘right to self-determination’ – of the Donbas region. This was a desperate attempt at looking for reasons within the international law framework for this invasion, the basis of which are ill-founded and unsustainable – especially given the havoc created by it.
Also read: As Afghanistan plunges into a political crisis, a look back at the patent illegality of its invasion by the United States in 2001

By allegedly recognising the right to self-determination of the people of Donetsk and Luhansk, Russia has effectively intervened and violated the sovereignty of Ukraine and Article 2 of the UN Charter. As Donetsk and Luhansk are parts of Ukraine, such recognition by an outside country involves interfering in the internal matters of a State, in direct contravention of the principle of equal sovereignty of all nations. President Putin has also single-handedly revoked Russia’s recognition of Ukraine as an independent nation, 30-years after its formulation, calling the idea of Ukrainian statehood – ‘fiction’. Not only is such act violative of Article 2 (1), but the process by which the invasion has taken place is also in violation of Article 1(1), Article 1(2), and Article 2(4) – all of which recognise sovereignty as the key principle of international relations, and calls for the maintenance of international peace and security through restraint in the use of force or the threat of use of force against the territorial integrity or political independence of any state.
Hence, any use of force and any threat thereof as well is considered illegal under all pretexts. Even under the garb of collective self-defence (Article 51), Russia absolutely cannot justify its actions, especially with the lack of an armed attack against Russia by Ukraine, and does not stand the test of necessity and proportionality. The concept of ‘anticipatory self-defence’, while novel, is not recognised in international law. The rigours of Article 51 stands within the strict confines of an ‘armed attack’ and does not allow for a perceived security threat beyond such parameters – which includes President Putin’s perceived threat of ‘expansion of NATO’. It is also violative of Article 51, if such action of ‘self-defence’ is not reported to the United Nations Security Council – which as it stands, was brought to light by Ukraine and not Russia.
Also read: Treaty obligations and the geopolitical consequences of the nuclear race

As news reports and images of the Russian invasion in Ukraine are shared across platforms, it has become amply clear that there have been widespread attacks throughout Ukraine and this ‘fight for liberation’ has not been restrained to the Donbas region.
While writing this article, there has been a further movement of Russian armed forces within the periphery of Kyiv – the capital city of Ukraine, and street fighting has erupted within Kyiv. While Russia asserts that such attacks have been restricted to armed bases across Ukraine, the toll of civilian causality has been rising.

Even under the garb of collective self-defence, Russia absolutely cannot justify its actions, especially with the lack of an armed attack against Russia by Ukraine, and does not stand the test of necessity and proportionality. The concept of ‘anticipatory self-defence’, while novel, is not recognised in international law.

The attack on Kyiv and ruthless airstrikes across the nation, which have also impacted the civilian population, is a direct violation of the Geneva Conventions (that establish international legal standards for humanitarian treatment in war) and international humanitarian law standards. The protection afforded to civilians and non-combatants has been emphasised in all four Geneva Conventions and Additional Protocols. The intention of any armed attack should always be to distinguish between combatants, and non-combatants and civilians, and parties should take feasible precautions to minimize harm to civilians and civilian objects. Geneva Convention IV specifically affords the protection to civilians and Article 51 (5) (b) of the Additional Protocol I prohibits such attacks that may cause incidental loss of civilian life, injury to civilians, and damage to civilian objects, especially in excess of the concrete and direct military advantage anticipated. Not only is Russia in direct contravention of these provisions, but has failed to respect the law of war and wreaked havoc in Ukraine.
Also read: Interpreting the United Nations Security Council Resolution 2593 on Afghanistan: change or status quo?

While Russia is not a party to the Rome Statute of the International Criminal Court, Ukraine is a signatory to it. The ruthless attacks against the civilian population, excessive and incidental death, injury, or damage also finds a place to invite the jurisdiction of the International Criminal Court. Under a combined reading of Articles 8(2)(b)(i), 8(2)(e)(i) and Article 8(2)(b)(iv) of the Statute, any intentional attack against civilian populations and objects consists of a war crime.
Since Russia is not a part of the statute, it might be difficult to bring a claim against it. However, past precedence (the Rohingyas’ Genocide in Myanmar) has highlighted that Ukraine can bring a legitimate claim to the International Criminal Court. This, however, would only be plausible in peacetime when Ukraine has gained its bearings again after this systematic aggression.
Also read: ‘Operation Enduring Slavery’: Afghan women betrayed and shunned by UN, ICC

Both parties are signatories to important conventions and declarations including the Universal Declaration of Human Rights, International Covenant to Civil and Political Rights, European Convention on Human Rights, and the Convention against Torture and Other Cruel, Inhuman or Degrading Treatment or Punishment. These treaties guarantee fundamental rights – including but not limited to the right to life and dignity, the right to be secure from torture, ill-treatment and forceful detention, and the right to a fair trial even during a public emergency.
Apart from the sovereignty and statehood of Ukraine, which is at stake, a heavy toll is being paid by humans on the ground. Whether combatants or otherwise, the inherent right to life of many is being violated by Russian armed forces, with almost 200 Ukrainian civilians already dead.

The attack on Kyiv and ruthless airstrikes across the nation, which have also impacted the civilian population, is a direct violation of the Geneva Conventions and international humanitarian law standards.

Implementation of international human rights law has always been a cause of concern; however, the European Union [EU] has always sought to enforce them stringently. Fundamental rights have always stood the test of time – whether in a state of war, public emergency, or in an act of aggression. These rights of the Ukrainian people against the Russian armed forces need to be protected and respected.
Also read: Were the US, UK and France led air strikes against Syria strictly by the book?

Another potential crisis and outcome of war, inevitably, is the plight of refugees. More than 50,000 people have fled Ukraine since the Russian invasion. Many nations, including Poland, Ireland, Moldova, and other EU members are preparing themselves for the flood of refugees that is expected. However, travelling to these nations, given the constant armed attacks, itself seems implausible now. With restrictions in movement, through all modes of travel, civilians are unable to flee Ukraine. It is heartening to see the response of the neighbouring nations willing to absorb the influx of refugees, especially within the EU member nations and the United Nations. With Ukraine sharing most of its borders with Russia, the options for the eastern region of Ukraine seem between a rock and a hard place. With diplomatic dialogue still on the charts, time, alas, will only tell the fate of the Ukrainian people and their future.

With the multicity of international law violations committed by Russia in its invasion of Ukraine, it seems implausible that Russia can justify its actions. Russia has committed multiple acts of aggression, armed violence, violations of international law, humanitarian law, criminal law, and human rights law in its attempt to ‘free the people of Donetsk and Luhansk’. It, in turn, has waged a completely unnecessary, unfounded, unjustifiable war on Ukraine. While sanctions have in the past have had a deterrent effect, it seems clear as day that these sanctions now hold no effect on the Russian Federation to achieve their current objective.
Also read: How globalization makes sanctions ineffective
The inherent right of a nation to its sovereignty, the inherent right to life of its citizens and unprovoked armed aggression inside another nation cannot be justified, especially under international law.
(Raushan Tara Jaswal is currently a Lecturer at O.P. Jindal Global (Institution of Eminence Deemed to be University), and an Advocate at the Supreme Court of India. She has an LL.M. from the University of Cambridge as a Commonwealth Shared Cambridge Trust Scholar. The views expressed are personal.)