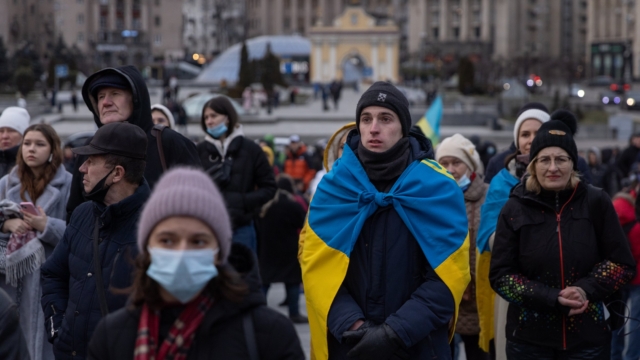 KYIV, UKRAINE - FEBRUARY 20: People sing the Ukrainian national anthem during a rally in support of Ukraine held during Maidan Revolution commemoration ceremonies on February 20, 2022 in Kyiv, Ukraine. In February 2014, the months-long Euromaidan protests culminated in violent clashes between protesters and riot police, leading to the deaths of over 100 people and the ousting of president Viktor Yanukovych, who had sparked the protests by rejecting a pact with the European Union in favor of closer ties with Russia. Eight years later, the country again finds itself at center stage in the geopolitical tussle between Russia and the West. (Photo by Chris McGrath/Getty Images)
Human RightsInternational LawOpinionRussian war on Ukraine

EU’s policy towards refugees from Ukraine exposes its double standards

The EU’s approach to refugees is deeply ingrained in racial discrimination, notwithstanding its preparedness to receive Ukrainian nationals, fleeing in the wake of  Russian invasion, writes RAUSHAN TARA JASWAL

“No one leaves  home, unless home is  the mouth of a shark.” -British poet, Warsan Shire
AS we enter the second week of the Russian invasion of Ukraine, even with the proposed ceasefire from the Russian Federation for a “humanitarian corridor”, a “quick war” seems completely out of the question. Intensifying this situation has been the plight of civilians stuck between the cross-fire. While it is mandated under various international law covenants that civilians and non-combatants cannot be hurt in any armed conflict – whether internal or external, civilian casualties have increased manifold in this unjustified aggression.

With Russian armed forces refusing to respect the basic tenant of the law of war and humanitarian law, civilians have been forced to seek refuge in various neighbouring nations like Poland, Romania, Slovakia, Moldova, Ireland, and other European Union (EU) member nations. Continuous airstrikes, cities across Ukraine being captured by the Russian armed forces, shelling, potential nuclear catastrophe, with no end in sight has rendered Ukraine an active war state with unliveable conditions. As a measure of last resort, people from Ukraine have had to flee their homes amid an ongoing war.

In a country of almost 44 million, more than 1.45 million people have fled Ukraine in the past week, triggering the ‘biggest refugee crisis of this century’. It is predicted that as many as 4 million people could flee the country in the coming weeks. This displacement is said to be the worst displacement within Europe since World War II and with every passing day of the Russian incursion of Ukraine, this crisis will only multiply.

This tragedy is compounded with restrictions in movement – with disruptions of train services, major highways blocked and unsafe for travel, and the presence of Russian forces across the nation, making it nearly impossible for people to leave Ukraine. The question thus is of the future of the civilians who have managed to cross borders to ‘safer havens’.

In a country of almost 44 million, more than 1.45 million people have fled Ukraine in the past week, triggering the ‘biggest refugee crisis of this century’. It is predicted that as many as 4 million people could flee the country in the coming weeks. This displacement is said to be the worst displacement within Europe since World War II and with every passing day of the Russian incursion of Ukraine, this crisis will only multiply. However, unlike other situations, the response of neighbouring States have had a proactive, considerate, humanitarian, and immediate response – to not only welcome the refugees, but also provide them with assistance, aid, accommodations, and even ‘special visas’. Most of the refugees are women and children with men staying back in Ukraine to fight in the war and these countries have been embracing the arrival of the flood of refugees in light of anti-migrant and refugee rhetoric and sentiments in the EU over the recent years. EU has also proposed the right to stay and work in the 27-nation bloc for up to three years. This is a massive U-Turn with respect to refugees and migrants, especially in light of conflicts in the region like the Syrian crisis. This move is a welcome change, however problematic and raging with double standards.

Issues Faced By Persons of Colour

In their bid to escape war-torn Ukraine, there has been a massive movement of people – not just Ukrainian citizens, but also migrants, students, and others. Before the conflict, Ukraine itself was a destination for the displaced – including refugees and asylum seekers.  However, during this turbulent time, there have been various reports coming out of Ukraine indicating that people of colour have been facing even worse conditions in their plea to flee the nation. Even the United Nations High Commissioner of Refugees (UNHCR) has also acknowledged the instances of discrimination and expressed their concern regarding race-based discrimination.

This discrimination is faced at various places within Ukraine – while taking transport within Ukraine and also at the destination countries like Poland. The priority, it seems, is to provide refuge only to “Ukrainians” that fit Eurocentric standards

Also read: Why the Afghanistan crisis underscores the need for a refugee law
This discrimination is faced at various places within Ukraine – while taking transport within Ukraine and also at the destination countries like Poland. The priority, it seems, is to provide refuge only to “Ukrainians” that fit Eurocentric standards. This process adopted by various nations indicates race-based discrimination and leaves often students at the mercy of border patrol (in the cases that they have been able to even reach the borders of neighbouring nations).

There have also been reports of instances where people of colour (groups of Nepalese, Indian and Somalian decent) were kicked and beaten with batons while trying to cross the border. They have also met a similar fate at the hands of the host country, feeding into their earlier anti-migrant and asylum seeker rhetoric. This discrimination violates the International Covenant on Civil and Political Rights and the International Convention on the Elimination of All Forms of Racial Discrimination, especially during a testing time globally.

Also read:  India’s treatment of the Rohingya reaffirms the need for a domestic refugee law

In a similar plight, is the fate of Indian students in Ukraine. Due to the lower cost of education, especially medical education as compared to the Indian private counterparts, Indians accounted for the largest student population with over 20,000 students. Adding to the burden of Indian students, was the recent abstention of their vote against the Russian aggression at the United Nations Security Council, United Nations General Assembly, and United Nations Human Rights Council apart from being from the “non-white” category.

These reasons have negatively affected their process to flee Ukraine. Blatant racism and growing perception of Indians merely being “fair-weather friends” have also complicated the issue. Delays in communication of the worsening situation in Ukraine by the Indian Government, inadequate response in light of a no-fly zone, and later even blaming students for pursuing medical education outside India have been some reasons why Indian students stranded in Ukraine are facing the major brunt of it.

The Indian Government has requested a “humanitarian corridor” from the Russian Government, especially for the students stranded in Kharkiv and other areas with heavily armed fighting within Ukraine. However, these measures are quite delayed. Disappointed with the lethargic reaction of the Indian government, with baffling and sometimes impossible advisories by the Indian High Commission in Ukraine, and seemingly unorganised “Operation Ganga”, the students have been left to their own devices in a place of active conflict.

The EU has been extremely welcoming of Ukrainian citizens completely in contrast to their rhetoric over the recent years. Without diminishing the extent of the present war, it is critical to remember the refugee crisis triggered by the conflict in Syria (2015) and their response then. The stark difference of treatment is also visible in the current situation, where migrants from Africa, Asia, Middle East have not been at the receiving end of the EU’s generosity – highlighting their discriminatory approach, even in times of conflict. Ideally, the generosity should be extended to people fleeing the war – regardless of caste, creed, race, gender, identity – especially in the present international refugee protection regime. However, that has not been the case.

Countries like Poland, Hungary, Slovakia (all accepting Ukrainian Refugees) have had a history of public discourse being tainted by racist rhetoric, more so about refugees and also have instilled hostile practices like pushbacks at the borders, draconian detention measures, unnecessary identification measures – which are being adopted even during this crisis. In fact, as recent as 2021, the EU hardened its borders in the aftermath of the Syrian, Afghanistan, and Iraq conflicts. While the Refugee Convention ensures non-discrimination based on race, religion, or country of origin, the same has rarely been put to practice by the EU, and this war is no exception.

Reports of ill-treatment of non-white people fleeing Ukraine has promoted various nations and international institutions including the African Union to strongly condemn the present situation.

Reports of ill-treatment of non-white people fleeing Ukraine has promoted various nations and international institutions including the African Union to strongly condemn the present situation. As the rhetoric of “civilised” refugees takes the stand, it has only exposed the deeply problematic deep-rooted, racist, and xenophobic policy against non-Europeans or “non-whites”.

The difference between a refugee and you is luck. While all people are created equal, some are more equal than others. The present scenario is indicative of the double standards posed by the EU in their approach to refugees, which is deeply ingrained in racial discrimination. While on the one hand, one can applaud their preparedness to accommodate, absorb, and rehabilitate Ukrainian nationals, their apathy towards the “others” leaves much to be desired for.

(Raushan Tara Jaswal is currently a Lecturer at O.P. Jindal Global University and an Advocate at the Supreme Court of India. She has an LLM from the University of Cambridge as a Commonwealth Shared Cambridge Trust Scholar. She tweets @raushantara)