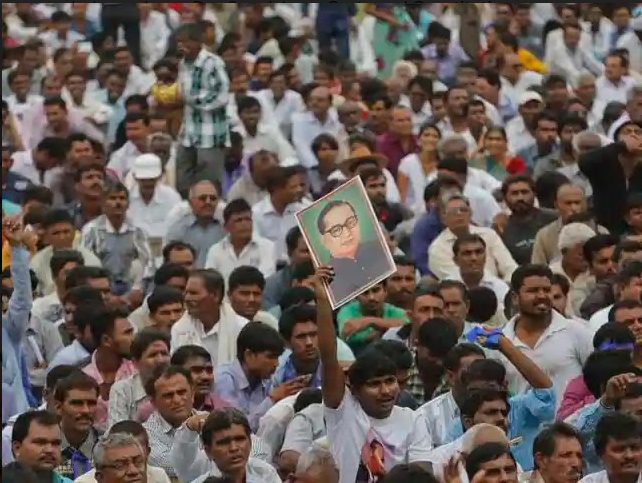 The discourse on caste had only been restricted to communities until it entered constitutional dialogues at the national level at the second Round Table Conference.

Gandhiji rejected special safeguards for any community particularly ‘depressed classes’ and claimed Indian National Congress as the sole representative of all Indians. Other voices entering constitutional dialogues, particularly that of Babasaheb Ambedkar, pointed to the different visions that underpin the constitutional discourses of castes and communities, i.e. the ideas of the ‘nation through Constitution” on the one hand, and on the other, the nationalist vision of “Constitution through nation or Swaraj”.

The meeting in 1931 also led to Gandhiji’s recognition of the implications of these constitutional dialogues which he carried forward to the Poona Pact with Babasaheb Ambedkar. Gandhiji held that the fundamentals of the Indian Constitution need to be discussed. He conceded to the principle of reservation, which he had opposed at the second Round Table Conference.

Although Babasaheb Ambedkar was disappointed with the Poona Pact (1932), he emerged as a national leader including the leader of the oppressed castes.

Later, in the Constituent Assembly, a reshaping of the cultural fault lines between castes and communities was undertaken alongside the structuring of the post-colonial welfare state. While reservations became part of the Constitution, the community was left to the goodwill of Indian secularism.

Babasaheb Ambedkar’s three main warnings on political, social, economic equality remain as relevant today as during his presentation of the draft Constitution of India.

While introducing the Draft Constitution, Babasaheb Ambedkar pointed to the contradiction between the political which uphold the principle of non-discrimination while social and economic inequalities persist. He stressed the transformative and radical potential of Directive Principles, and its interpretation in imposing on the state to take measures to realize the rights and entitlements of citizens.

Kannabiran (2012) pointed out that while discrimination could be a shared experience, there could be specificities of histories and location. We can understand Article 15 on non-discrimination fully only when linked with Article 21-Right to Liberty which can carry distinct features in the contexts of Dalits, Adivasis, religious minorities, women, sexual minorities, persons with disability and the conditions of liberty of these sections. This understanding holds special significance for movements, dialogues, alliances of the marginalized and suggests an intersectional reading of the articles of the Constitution.

The Supreme Court ruled recently that “there is no fundamental right which inheres in an individual to claim reservation in promotion”, and that “no mandamus can be issued by the court directing the state government to provide reservations”. So, have reservations been interpreted in the spirit of Articles 14, 15, and 16(4)—the last specifically dealing with the right to equality of opportunity in employment? How have entitlements as justiciable fundamental rights and non-justiciable directive principles been interpreted juridically over the years?

Are fundamental rights discretionary, as this Supreme Court verdict suggests, and hence the State has no obligations?

Underlying the verdict are ideas of ‘merit’ and ‘efficiency’, a social debate finding interpretations in varied juridical pronouncements going back to the 1960s, and which gained strength in the discourse around anti-Mandal Commission agitations. It pitted individual mobility against class entitlements (of Dalits, in this case) and the State’s need to identify ‘legitimate claimants’. The verdict also said there is no justiciable right or constitutional duty to provide reservations, thereby reducing substantial equality to formal equality against the spirit of the Constitution.

There has been a steady erosion of fundamental rights and constitutional principles by varied judgments on reservations. For example, a five-judge constitution bench in the M. Nagraj case (2006) held that states were bound to provide quantifiable data on backwardness inadequate representation in government jobs of scheduled castes and scheduled tribes and overall administrative  ‘efficiency’ before providing quota in promotions.

He stressed the transformative and radical potential of Directive Principles, and its interpretation in imposing on the state to take measures to realize the rights and entitlements of citizens.

Various state governments sought reconsideration by a larger bench as the verdict placed unnecessary conditions overlooking the stigma of caste and presumed backwardness. One of those who opposed quota in promotions, argued that the presumption of backwardness vanishes once someone joins government service, and that quota can be continued for class IV and III services, but not for higher services.

Turning down an appeal by the Centre, the Supreme Court in September 2018 upheld its 2006 order that said quota in promotions was not mandatory in public sector jobs. The court asked why the idea of ‘creamy layer’ used for OBCs could not be applied to deny quota in promotion to the ‘affluent’ among scheduled castes and tribes. There was an assumption that these communities are not entitled to social mobility, and that social mobility meant discriminatory attitudes did not persist.

The question of reservations for scheduled castes and tribes can be approached from two levels—judicial pronouncements and political developments. On April 2, 2018, a Bharat Bandh called by Dalit organisations against dilution of the stringent provisions of the SCs/STs (Prevention of Atrocities) Act (POA Act) of 1989 by a Supreme Court order, evoked wide response from Dalits and India witnessed an unprecedented mass protest. It was largely peaceful but there were some clashes with the elites.

Through a well-publicised parliamentary session, the Central government decided to restore the original provisions of the law, and the Supreme Court, on an appeal by the central government, recalled the verdict that had diluted it.

There are apprehensions that constitutional rights are being eroded and that reservation itself could be removed. The floggings of dalits in Una, Gujarat, and other atrocities on Dalits energised varied Dalit sub-castes and organisations to unite into alliances with the youth and students, in particular, mobilising around the suicide of Rohith Vemula in Hyderabad.

Broader alliances were being forged. What was considered as ‘sectional’ issue are more and more leading to wider solidarities on citizenship, rights and constitutional principles, with the Dalit movements, youth-women and men- in particular, providing the leadership.

The erosion of social and economic rights guaranteed by the Constitution through judicial pronouncement, the curb on counter-cultural assertions by Dalits, and the persistently increasing violence against marginalized communities are leading to newer forms of solidarities and forms of resistance.

The Bhima-Koregaon case too is linked with counter-cultures and growing solidarities among marginalised sections—Dalits, Adivasis, Muslims.

Sant Ravidas, a revered spiritual leader of Dalits, was a  Dalit saint-poet of medieval north Indian Bhakti movement, who composed poems that influenced social protests to build a casteless society. In August 2019, following a long drawn out court case, the Supreme Court ordered the demolition of a century-old temple of Sant Ravidas located in Jahanpanah forest area of Tughlaqabad (Delhi) and that any protest would be considered as contempt of court and criticism of the judgment would not be permitted. The Delhi Development Authority demolished the temple amidst protests and arrests of Sant Ravidas followers.

The Ravidassia socio-religious movement was born in the Doaba region of Punjab and spread throughout north India and today they form an internationally networked prominent dalit subgroup.

The Central government, noting the mass protests spreading in north India, appealed before the Supreme Court to rebuild the temple. The Supreme Court then reversed its earlier judgment and ordered the temple to be rebuilt in the same area with a central government committee. Meanwhile, the Guru Ravidas Samaroh Samiti in charge of the temple since 1959, was kept out of the central committee following a strong objection put forward by the Attorney General.

The erosion of social and economic rights guaranteed by the Constitution through judicial pronouncement, the curb on counter-cultural assertions by Dalits, and the persistently increasing violence against marginalized communities are leading to newer forms of solidarities and forms of resistance.

Babasaheb Ambedkar’s three main warnings on political, social, economic equality remain as relevant today as during his presentation of the draft Constitution of India.

(Meera Velayudhan is a  Policy Analyst based in Kochi.  Views expressed are personal. Her email: [email protected])