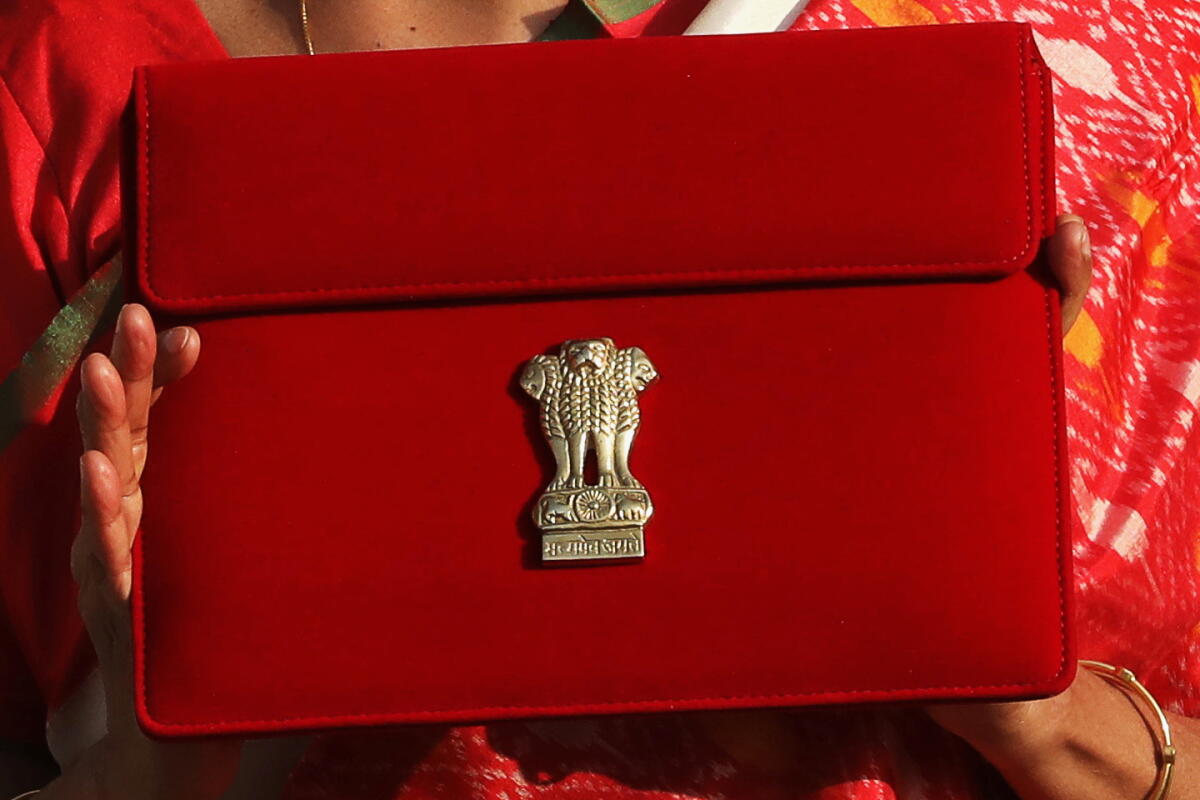 It is clear from the Union Budget’s overall thrust and specific proposals that the government wishes to tax the pandemic-hit working class hard. Anything goes, so long as private corporates and the wealthy can profit, writes GAUTAM MODY.

THE Union government’s Economic Survey 2020-21, released on January 30 says India has “charted its own unique trajectory”. Indeed, India’s draconian countrywide lockdown was unparalleled. It pushed more people out of jobs and sent many more millions back into poverty than any other country.

Budget 2021-22 only confirmed that this trend will continue. The government has committed to institutionalise India’s already high and growing income inequality, but it will allow the unbridled growth of corporate private capital. This is the Bharatiya Janata Party’s growth model—creating an economy driven by the brute power of private capital and advancing mass poverty.

The key annual statements that explain the state of the economy and the government’s actions proposed for the year ahead carefully avoid discussing the employment crisis—a mess that existed well before the COVID-19 pandemic.

WHO BORE THE COSTS OF THE PANDEMIC?

Just like in the last budget, the Finance Minister felt no need to explain in this one how and why the fiscal deficit is nearly twice what it was the previous year. The government also felt no pressure to explain where its taxes fell short. These are important questions whose answers would reveal who is, and was, bearing the costs of the pandemic.

The shortfall in tax-collection was: 35% from corporate taxes, 29% from income tax, and only 15% from indirect taxes (Goods and Services Tax, excise on petrol and diesel). These figures may suggest that it is the tax-paying companies and the rich who suffered more from the pandemic, as a result of which they could only pay lesser taxes than expected.

During the pandemic, the government did spend a little more on the food subsidy and the rural employment guarantee scheme (MG-NREGS), but the Annual Financial Statement makes it very clear that now it will be business-as-usual.

But it is the poor, whose jobs and sources of income vanished during the lockdown, who suffered the most during the pandemic. For, they have paid way more taxes in proportion to their income than the rich. For example, they did not just pay the GST on every essential commodity they consumed, the high taxes on petrol and diesel pushed the prices of these commodities further up. The poor thus bore a greater share of the costs of the pandemic than the wealthy.

Of course, everybody knows that the poor suffered during the lockdown and thereafter and that they are still struggling. What the budget reveals is that the government extracted more from them during the pandemic.

On top of it, the latest budget has made it easier for the rich and super-rich of the country to pay fewer taxes than they owe. The Finance Minister has assured that the government will reduce the period within which tax investigations can be launched against evaders from six years to three years. It is also raising the limit for serious fraud cases to an annual income of Rs.50 lakh and above. This effectively puts an end to a substantial number of income tax evasion probes.

During the pandemic, the government did spend a little more on the food subsidy and the rural employment guarantee scheme (MG-NREGS), but the Annual Financial Statement makes it very clear that now it will be business-as-usual.

In the financial year 2022, the government will substantially cut back expenditure on virtually all social protection measures including the food subsidy, MG-NREGS, Anganwadi scheme, the Mid-Day Meal Scheme, and several others.

WHERE IS OUR ECONOMY TODAY?

The assumption the government seems to be making is that India’s economy is back to where it was a year ago. This is a false premise since the Economic Survey’s estimate of economic growth for 2021-22 is questionable.

The key annual statements that explain the state of the economy and the government’s actions proposed for the year ahead carefully avoid discussing the employment crisis—a mess that existed well before the COVID-19 pandemic.

Several independent economists have explained that the scale of India’s economic decline during the past year is far worse than the government claims and that recovery will be slower than it seems to think as well. Curtailing government expenditure on social protection will not just hurt the most marginalised but sharply curtail the recovery of demand in the economy. This will keep employment levels low and affect the growth rate.

After all, demand has been declining for three years in a row, long before the pandemic affected India, and unemployment had hit a 45-year high in 2019. The pandemic has only sharpened the economic crisis precipitated by the BJP government’s policies.

The government has only one magic answer to all problems—privatise the public sector and monetise public assets including lands and public works—highways, electricity lines, whatever it can think of. In the Budget is the announcement that the government will privatise two public sector banks in the coming financial year. This the government has decided without even naming the banks it plans to privatise. What does this indicate? That there is no rationale or reason to sell off public assets other than a brazen commitment to the private sector.

The Budget promises to increase the expenditure on healthcare and proposes to spend Rs.35,000 crore on the COVID-19 vaccination programme. The amount committed does not square up with India’s size or population. As for the ongoing vaccination programme, there is no clarity yet on who all and how many Indians will be vaccinated.

The pandemic has taught governments across the world to address the concerns of emergency, essential, and frontline workers. For us, they are the health workers and include the ASHA (social health) and ANM (auxillary health) workers, the Anganwadi workers, municipal workers, transport workers, teachers, and so many others.

Yet there is money for the much-questioned New Education Policy, 2020, but no money to get schools up and running and our children back into classrooms.

The message from Budget 2021-22 is that if you suffered, then so be it. Don’t complain, don’t expect anything, just get on with it. This is the BJP’s notion of self-reliance—it is individual self-reliance they seek, not the country’s self-reliance. And this is why the government has opened up the insurance industry further, to complete foreign ownership and control.

The government announced an Rs.100 crore “package” for tea plantation workers in Assam and West Bengal. This is a welcome move, for this section of workers lives in conditions worse than destitution. It has been this way for decades. However, consider exactly how far this money will go: if divided equally amongst the 5,00,000 tea plantation workers in the two states, it amounts to an expenditure of Rs.2,000 per worker for the whole year.

The Bombay Stock Exchange index rose by 5% immediately after the budget speech was delivered. But then the index has risen 87% since the day the horrific lockdown was announced. The revenues and profits of the largest companies have been growing, and yet their expenditure on workers is declining.

Assam and West Bengal are to hold Assembly elections this year. So, what the BJP understands very well is that if you keep people poor you can buy their votes on the cheap. This Rs.2,000 per worker spending fits the pre-election vote-catching strategy.

WHAT ABOUT THOSE WHO BENEFITED FROM THE PANDEMIC?

The Bombay Stock Exchange index rose by 5% immediately after the budget speech was delivered. But then the index has risen 87% since the day the horrific lockdown was announced. The revenues and profits of the largest companies have been growing, and yet their expenditure on workers is declining.

This tells us a very simple story: Just like the ban on high-denomination currency notes in November 2016 and the introduction of GST, the lockdown helped large companies take over the businesses and market-shares of small and medium businesses, especially those in the unorganised sector.

Small businesses have been wiped out and jobs have been lost by the millions while large companies, their super-rich owners, and multinationals have gained.

The four labour codes and the three new farm laws will make this divide even sharper, as all working people—workers and farmers—are being pushed further to the margins. Whether it is a worker under the new fixed-term contract or a small or medium-sized farmer with a contract with a large company, everyone—except the few super-rich—is being reduced to the same level of precarity.

The Budget, after cutting the expenditure on agriculture says several times that the government will double farm incomes by 2022. Even if this claim is true, a vast section of the farming community did not hear it because they are at protest sites on the margins of the Capital with their internet cut off.

Still, the BJP-led government does not think there is anything wrong with its economic policies and strategies. It wants others to know what it is doing for each one of us. If you object, then you do not understand what is good for you. And if you protest you are anti-national. Calling this budget a crude expression of the BJP’s agenda is possibly anti-national too.