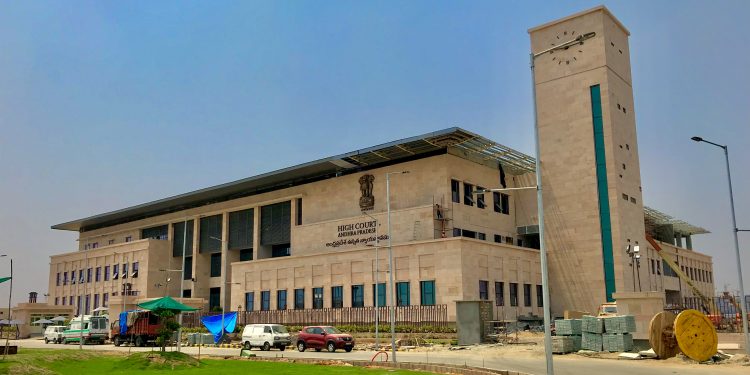 Why did the Andhra Pradesh High Court find that the state legislature had no competence to create three state capitals?

The court held that the state government had no competence to come up with the two legislations. As the state legislature had repealed these two legislations in the meantime, the question arose whether the High Court could still deal with the issue after the repeal.

Facts in a nutshell

Initially, around 33,000 farmer families of Amravati had given up their lands for the Capital region development program, which was spearheaded by the state’s previous government. About Rs. 15,000 crores were spent on development activities and Rs. 32,000 crores for the grounding works.

However, after the state’s current government came to power, it decided to come up with legislation for the construction of three capital cities in 2020. Accordingly, legislation was brought by the state government with an aim to develop Amaravati, Visakhapatnam, and Kurnool as the legislative, executive, and judicial capitals respectively.

This led to farmer families voicing protests as they were left with no sustainable means of livelihood. This prompted over 100 farmers to move the court challenging the government’s move.

Challenging the state’s laws, the petitioners mainly argued that the abrupt halting of development in the capital region had led to a crash in the value of plots. This could result in many families incurring huge losses of over Rs 30,000 crore, if the value of returnable plots is estimated at the lowest prices.

It was also argued that the government’s failure to develop the land pooled amounts to violation of fundamental rights guaranteed under Article 21 and the right to property under Article 300A of the Constitution. It also defeats the legitimate expectation of the farmers who surrendered large parcels of land under the Land Pooling Scheme, which is a statutory scheme under Andhra Pradesh Capital Region Development Authority Act.

However, in the statement of objects and reasons of the Repeal Act No. 11 of 2021 through which these two Acts were repealed, it is made clear that the state legislature is intending to introduce the bill again for decentralization of administration. “Thus, the cause regarding legislative competency of legislature to pass such enactment is still alive and the advocates for the petitioners referred above urged this Court to decide such issue of legislative competency to pass or enact any other law for shifting, trifurcate or bifurcate capital”, the High Court observed.

“Even after the said repeal, the senior Members of the government continue to lay stress on the issue of Decentralisation, multiple capitals etc. The statement of reasons for withdrawing the Act 28 of 2020 also talks of the intention of the government to go for decentralized development and multiple capitals. Thereafter, it is clear that the intention of the present government is to go forward with the concept of the decentralized capitals or multiple capitals. Since this intention is clear and it is likely to manifest itself in the form of a new Act, this Court is of the opinion that it has a duty and also the jurisdiction to act now itself. The issue ultimately is about the competence of the State to enact the Bill in contra distinction to the actual contents of the Bill. As the intention of the State Government is manifest and clear, this Court is of the opinion that it need not wait till the Bill is actually passed before embarking of an enquiry and coming to the conclusion about the “competency of the legislature to enact”.

On the issue of competence of the Legislature, the High Court was categorical:

At the same time, Section 6 of the Andhra Pradesh Reorganisation Act permits the Union Government to constitute an expert committee to study various alternatives regarding the new capital for the successor state of Andhra Pradesh and make appropriate recommendations in a period not exceeding six months from the date of enactment of the Reorganisation Act.

In such cases, the Court’s duty is to interpret Constitutional provisions to achieve the real objective of constitutional provisions by applying various methods of interpretation. The bench observed: “Achieving an idealistic perfection tends to make constitutions rigid. There will always remain some areas which are either deliberately left unaddressed or inadvertently left so. These gaps in the constitution are called constitutional silence. Constitutions are evolutionary and thus silence therein is inevitable. Thus in simple words, silences can be said to be interpreting what was omitted when a constitution was enacted, but it was not what the framers would have rejected. Silences in Constitutions have been termed by many experts as “gaps and abeyances”. It is a method of adjudication.”

The bench added that Constitutional silences are bound to occur, even if constitutions are regarded as exhaustive, like the Indian Constitution. “Silences and abeyances enable pragmatism, ensure inclusiveness for future ideas and ensure deliberations. Judiciary plays a crucial role in interpreting Silences in the constitution since it is the final interpreter of constitutional provisions. It is the role of courts primarily the Supreme court of India to fill the gaps and abeyances through its interpretation. However, at the same time, it has to ensure that it does not result in judicial legislation”, the bench added.

The Supreme Court has used the doctrine of constitutional silence to expand the ambit of rights and to make democracy substantive. It has kept in mind the constitutional morality while dealing with silence. However, courts must keep in mind that interpreting silence must be done from an objective sense and should not be based on the subjective satisfaction or subjective understanding of the judge, the Supreme Court emphasised.

In view of the language employed in Article 4 of the Constitution of India employing the words “supplemental, incidental or consequential provisions”, the setting up of legislature, executive and judiciary of the state is within the powers of Parliament, and the state legislature is incompetent to enact any law for setting up those three wings, the bench made it clear.

While Article 4 is not clear what is to be included in “supplemental, incidental or consequential provisions”, but the Supreme Court in Mangal Singh vs. Union of India (1966) clarified it; even otherwise, it is the duty of the Court to interpret such provision, either by applying general principles of interpretation or any other modes of interpretation like “doctrine of progressive interpretation” or “doctrine of living tree”, the bench explained.

The court ordered that the developed plots be handed over to the petitioners within three months, and asked the authorities to pay Rs 50,000 to each petitioner.