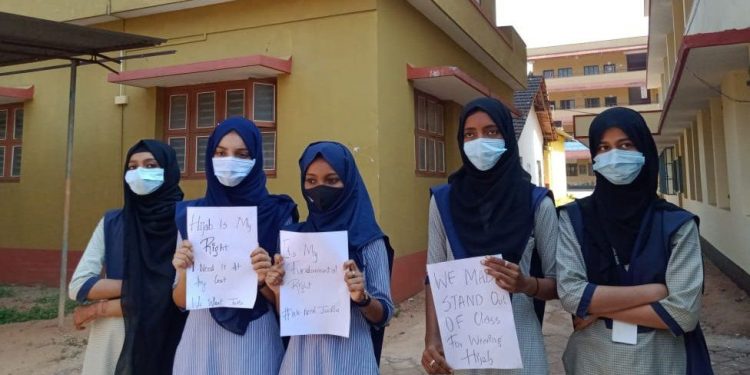 Ban on hijab flies in the face of legal precedents

The question of a ban on hijab in classrooms must be considered in the light of principles laid down by courts, writes PARAS NATH SINGH.

IN a recent order, the Karnataka Government has invoked Section 133 (2) of the Karnataka Education Act, 1983, to state that students will have to wear the dress chosen by the college development committee or the appellate committee of the administrative board of pre-university colleges, which come under the pre-university education department.

“In the event of the administrative committee not selecting a uniform, clothes which disturb equality, integrity and public law and order should not be worn,” it stated.

The directive has apparently cited an order of the Supreme Court in Asha Ranjan and Others vs State of Bihar and Others in 2017 according to which larger public interest prevails upon individual interest not by negating the individual rights but by upholding larger interests. Relying on the same principle, the directive claims to ensure the relationship between institutions and students. This indirect ban on the wearing of hijab by Muslim girl students in their colleges flies in the face of clear legal principles laid down by the courts on various occasions.

In the case of Asha Ranjan v State of Bihar, in which the state government’s directive takes shelter, the factual matrix was different. The petitioner, in that case, sought the transfer of the cases pending against the accused Shahabuddin, from Siwan Jail to jail in Delhi and conducting of the trial through video conferencing, in view of the political influence wielded by him. The petitioner’s husband, a journalist, was allegedly shot dead by the henchmen of the accused, as revenge for exposing the latter’s crimes and the investigation of the case was entrusted with the CBI.  One is at a loss to understand how the Supreme Court’s observations in this case in the context of the accused’s right to a fair trial being balanced with victim’s rights, could be relied upon to justify the ban on wearing of hijab by Muslim girls within their schools.

This indirect ban on the wearing of hijab by Muslim girl students in their colleges flies in the face of clear legal principles laid down by the courts on various occasions.

That apart, the Kerala High Court has dealt with the issue of hijab in the context of the right to religion on three occasions.

In Nadha Raheem vs. CBSE (2015), the dress code prescribed by the Central Board of Secondary Education (CBSE) for appearing in the All India Pre-Medical/Pre-Dental Examination was at issue. The Board had only allowed wearing half sleeve kurta/salvar to appear in the competitive examination. This followed after the Supreme Court in June 2015 had scrapped the 2015-16 All India Pre-Medical Test (AIPMT) as having been “vitiated to the core by the use of deceitful means and measures to benefit” some candidates.

The two aggrieved Muslim girls approached the Kerala High Court contending that the dress code prescribed by the CBSE would prejudice them, insofar as their religious custom mandates them to wear a headscarf and also full sleeve dresses. The Board, in support, of its decision pointed out to the high court that the Supreme Court had flagged the ingenious methods by which copying was resorted to by means of electronic gadgets, wired to the body itself, and camouflaged by full sleeve dress and so on and so forth.

Rendering the findings, Justice K. Vinod Chandran observed that the dress code as such couldn’t at all be said to be wrong or improper especially considering the judgment of the Supreme Court. At the same time, Justice Chandran noted that it could not be ignored that in our country with its varied and diverse religions and customs, it cannot be insisted that a particular dress code be followed failing which a student would be prohibited from sitting for the examinations. He thus refused to pass any blanket order but directed the CBSE that the petitioners who intended to wear a dress according to their religious custom, but contrary to the dress code prescribed by the CBSE, should present themselves before the Invigilator half an hour before the examination and on any suspicion expressed by the Invigilator, they would also subject themselves to any acceptable mode of personal examination as decided by the Invigilator. It was also directed that if the Invigilator required the headscarf or the full sleeve garments to be removed and examined, then the petitioners should also subject themselves to that. CBSE was also asked to issue general instructions to its Invigilators to ensure that religious sentiments be not hurt and at the same time discipline be not compromised.

Justice Chandran noted that it could not be ignored that in our country with its varied and diverse religions and customs, it cannot be insisted that a particular dress code be followed failing which a student would be prohibited from sitting for the examinations.

It can be seen from Justice Chandran’s approach that he tried to harmonise the right of Muslim girls to wear hijab with that of the sanctity of the examination sought to be achieved by the CBSE through its dress code. Justice Chandran did not render any findings whether the hijab was an essential part of the religion and thus protected by Article 25.

A year later the issue of the dress code prescribed by the CBSE for the same examination, that is, AIPMT came for consideration once again before the Kerala High Court. The female candidate who was appearing in the competitive examination challenged the dress code. Her father also joined the petition. The dress code had mandated the candidates to wear “Light clothes with half sleeves not having big buttons, brooch/badge, flower, etc. with Salwar/Trouser”. Petitioners assailed the dress code on the ground of violation of fundamental rights Article 25(1) of the Constitution.

In this case, Justice A.Muhamed Mustaque examined whether wearing the hijab is an essential part of the religion or not; and if it forms part of essential religious practice, can it be regulated in the light of Article 25(1). He applied the test of essential religious practices as propounded by the Supreme Court in The Commissioner of Hindu Religious Endowments, Madras vs. Sri. Lakshmindra Thirtha Swamiar of Sri Shirur Mutt (1954). In Shirur Mutt, for the first time, it was held that what constitutes the essential part of a religion is primarily to be ascertained with reference to the doctrines of that religion itself.

Justice Mustaque examined Quranic injunctions and the Hadiths to hold that it is a farz(obligation) to cover the head and wear the long-sleeved dress except for the face part and exposing the body otherwise is forbidden (haram). The judge though acknowledged that there is a possibility of having different views or opinions for the believers of Islam based on ijithihad (independent reasoning), and added that the possibility of having different propositions is not a ground to deny freedom if such propositions have some foundation in the claim.

Justice Mustaque examined Quranic injunctions and the Hadiths to hold that it is a farz(obligation) to cover the head and wear the long-sleeved dress except for the face part and exposing the body otherwise is forbidden (haram).

He then went on to examine whether the right to wear hijab can be regulated by the exceptions for the exercise of the right to religion, that is, public order, morality, health and other fundamental rights. He noted that the rationale for prescribing a dress code by the Board is to avoid malpractices in the examination and that such a prescription was not by invoking an interest of public order or morals of the society. He found the dress code prescribed by the board was not based on any of the grounds on which the right to religion could be regulated. He allowed the petition but also safeguarded the interest of the Board by allowing the invigilator to frisk such candidates including by removing scarf. On appeal filed by the CBSE, the division bench refused to interfere with the board’s decision.

In 2018, Justice Mustaque was once again faced with a petition filed by two minor girl students studying in a private school challenging the dress code prescribed by the school, which, according to them, was against their religious belief inasmuch as it denied them to wear a headscarf as well as full sleeve shirt. Refusing the relief to the petitioners, Justice Mustaque held that the petitioners could not seek to impose their individual rights against the larger right of the institution.

What is crucial to note is that the decision of the High Court in Fathima Thasneem is clearly distinguishable from the decisions of the Court in Nadha Raheem and Amnah Bint Basheer for two reasons. First, no state action was involved in the case of Fathima Thasneem. Second, the school being private had the right to establish, manage and administer an institution, which is traceable under Article 19 of the Constitution of India. The judge himself noted these two distinguishable factors after duly noticing the decision in Amnah Bint Basheer.

“The dominant interest, in this case, is the management of the institution. If the management is not given free hand to administer and manage the institution that would denude their fundamental right. The Constitutional right is not intended to protect one right by annihilating the rights of others. The Constitution, in fact, intends to assimilate those plural interests within its scheme without any conflict… However, when there is a priority of interest, individual interest must yield to the larger interest. That is the essence of liberty”, the High Court held.

What is clear from the decisions of the Kerala High Court is that “hijab” is a part of essential religious practice. This right is enforceable where state action is involved. In so far as private institutions are concerned, Muslim girls cannot claim the right to wear the hijab if the dress code prohibits the same.

In the celebrated decision in Bijoe Emmanuel v. State of Kerala(1986), the Supreme Court held “whenever the Fundamental Right to freedom of conscience and to profess, practise and propagate religion is invoked, the act complained of as offending the Fundamental Right must be examined to discover whether such act is to protect public order, morality and health, whether it is to give effect to the other provisions of Part III of the Constitution or whether it is authorised by a law made to regulate or restrict any economic, financial, political or secular activity which may be associated with religious practise or to provide for social welfare and reform. It is the duty and function of the court so to do”.

The Muslim girls from the government college have approached Karnataka High Court against their college’s decision. Indeed, the Kerala High Court’s decision is not binding on the Karnataka High Court but the decision of the court of law carries great persuasive value. The Courts need to remember what the Supreme Court said in the Bijoe Emmanuel case, “Article 25 is an article of faith in the Constitution, incorporated in recognition of the principle that the real test of a true democracy is the ability of even an insignificant minority to find its identity under the country’s Constitution. This has to be borne in mind in interpreting Article 25″.

These words squarely fit within the present context and one hopes the Karnataka High Court while examining the case of young Muslim girls would keep these observations in consideration while interpreting Article 25.