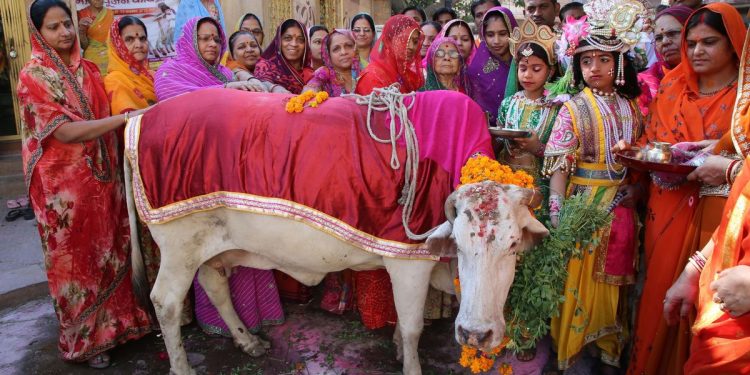 Unravelling politics of Hindu vegetarianism and animal rights in India

The conflation of Hindu vegetarianism with veganism is completely inaccurate since both these ideas are antithetical, and it is also harmful as it obstructs our bid to create a just society, CHAITANYA TALREJA and SANCHITA explain.

ON September 1 last year, Allahabad High Court’s Justice Shekhar Kumar Yadav held that the cow should be declared as the national animal of India. Urging the Union Government to bring a bill in the Parliament for the protection of cows, Justice Yadav also said that the government should declare cow protection as the fundamental right of Hindus.

As cow protectionism and Hindu vegetarianism continue to build a strong political grip and instances of violence against minority and Dalit, Bahujan and Adivasi communities are  on the rise, some questions emerge – is Hindu vegetarianism actually about protecting animals, just like veganism? Is veganism – a social justice movement for non-human animal liberation from human exploitation – just an extension of Hindu vegetarianism in India?

We critically engage with these vexed questions here by unravelling the nuances around them.

Also read: The Indian judiciary and its not so holier-than-cow verdicts

Veganism is a social justice movement against speciesism, and is often conflated with Hindu vegetarianism in India. Veganism excludes, as far as practically possible, all forms of exploitation and oppression of non-human animals (hereinafter, animals) — for food, clothing, entertainment, or any other purpose.
On the other hand, vegetarianism is merely a diet that excludes meat consumption for different reasons, such as religious beliefs and health concerns. Some people also turn vegetarian to avoid their participation in the killing of animals. Hindu vegetarianism is a form of vegetarianism associated with religious beliefs.
Hindu vegetarianism is foundationally built on speciesist and casteist beliefs that largely go unnoticed. It demonstrates a system of caste superiority over the meat and beef eating castes. It is not driven by a pursuit of kindness to or rejection of cruelty against animals.
Hindu vegetarianism emerged as a consequence of the struggle between Brahmanism and Buddhism, as explained by Dr B.R. Ambedkar in detail in his book ‘The Untouchables: Who Were They? and Why They Became Untouchables?’. He explains that this happened at the time when Buddhism began to gain popularity in India owing to its preaching and practice of non-violence towards all beings.
Before this conflict for supremacy, Vedic history depicts Brahmanism to have always been extensively involved in animal and human sacrifices as rituals. Dr Ambedkar refers not only to the cow-sacrifice ritual’s importance for the then Brahminical Hindu traditions but also cites Vedic Hindu texts that depict that Hindus relished beef. For example, the ‘Kali Purana’, a religious text for Hindus, extensively mentions the rules, conduct, and procedures for sacrificing animals and humans. Additionally, meat consumption was widespread among Hindus.
Post the adoption of vegetarianism by the Brahmins, Dalits were made figures of scorn by the Brahmins and other “upper-castes” by regarding them as “impure” for their continued consumption of the flesh of animals, especially that of the cow. Dalits only had access to animal carcasses as they had no other option to survive in destitution due to social exclusion. The cow was elevated to the position of a ‘holy’ animal and a mother by the Brahmins in a bid to undermine Buddhism. Even today, several caste Hindus consume the meat of animals but are in no way considered ‘impure’, unlike the Dalits who are stigmatised for their identity and food practices. According to Dr Ambedkar, untouchability is intimately linked with the history of Hinduism’s relationship with the cow.
Also read: Karnataka Passes Anti-Cow Slaughter Bill, Activists and Opposition Fear the Rise of Cow Vigilantism, Dalit Discrimination

Hindu vegetarianism is socio-politically projected as a benevolent way of life where its followers are regarded as compassionate people refraining from harming animals. Rooted in speciesist-casteist beliefs, Hindu vegetarianism only concerns itself with the non-consumption of the flesh of animals, and does not consider all the other ways animals are harmed. It is fundamentally motivated by the maintenance of one’s caste superiority and ”purity” over the castes who consume animal meat.
Today, Hindus appear to be ‘respectful’ and ‘non-violent’ towards the cow. However, their reverence for the cow is deceptive as it is a move that provides cultural legitimacy to consume cow products. Cows are exploited for their milk, as cow’s milk and by-products are extensively used in Hindu rituals. This clearly indicates that the concern of Hindus towards the cow doesn’t have any genuine regard for the animal. Additionally, cows are not only exploited for their milk, but also for their urine and dung, which are considered sacred by Hindus. This culture expresses contempt towards the consumption of cow meat; however, not only does it stay silent when it comes to the exploitation of cows for their milk, excretions, skin, and bones, but also promotes commodification and exploitation of the bovine animal. This deceptive elevation of the cow over the other animals is harmful to the cow, contradicting her ‘holy’ position in Hinduism.
Moreover, cow-vigilantism and so-called protection of the cows by the Hindutva elements are evidently mischievous, be it exploiting their Hindu identity to smuggle cows to other countries, or to put the lives of people – often of Dalits and Muslims – in danger for their consumption of beef or transportation of cows.
Also read: Explained: Assam Amendment Act on cattle preservation
Hindu vegetarianism is neither concerned with non-violence to cows nor other animals, considering its foundation and ongoing reality. This is precisely why conflating it with veganism – a philosophy, and movement that seeks to reduce harm towards animals in all ways possible and practicable – is detrimental to animal rights, to freedom from human exploitation, and to social justice at large.
Such a conflation directly harms and demonises animal rights. With its speciesist-casteist roots and politically dominant and exploitative character, Hindu vegetarianism needs to be condemned as an oppressive force. But conflating Hindu vegetarianism and veganism is a regressive step in the struggle for social justice as the latter is a social justice movement that aims to serve justice to the marginalisation of animals by drawing attention towards it.
(Chaitanya Talreja is an Assistant Professor of Economics at the Centre for Regulatory Policy and Governance, School of Habitat Studies, Tata Institute of Social Sciences. Sanchita is a freelance journalist and an animal rights advocate. The views expressed are personal.)