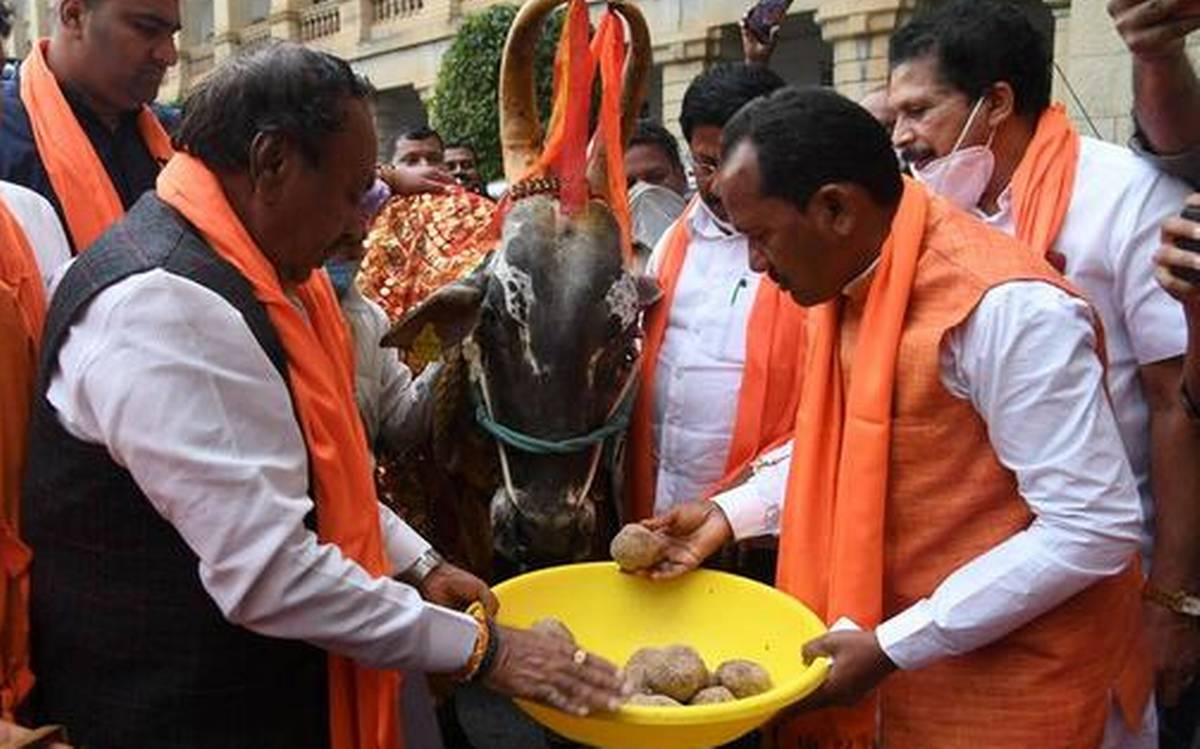 The Karnataka Government has passed a highly controversial anti-cow slaughter Bill amid pandemonium in its Upper House. Opposition and activists have criticised the move alleging that it seeks to strengthen the power of cow vigilante groups and will result in the targeting of minorities, particularly Dalits and Muslims. A report by MANYA SAINI.

THE Karnataka government has passed the contentious Karnataka Prevention of Slaughter and Preservation of Cattle Bill, 2020 through the legislative council. The Bill was put to a voice vote in the House amid pandemonium and ruckus as the Opposition tore up copies of the proposed legislation.

The new Bill with its stringent provisions has fuelled the fear that minority communities engaged in trading cattle will be targetted by fringe groups.

C.N. Ashwath Narayan, the Deputy Chief Minister’s remark that cow vigilantes through the bill would have “a scope to work in this provision,” has added to the prevailing distress. Narayan further claimed that individuals practising cattle trade “were completely armed” and “they were taking lives and killing people. It is not the vigilantes.”

The Opposition’s demand that the Bill be referred to a select committee and subjected to an extended debate was rejected by newly elected deputy chairman M. K Pranesh of the Bharatiya Janata Party (BJP). In a bid to protest against the decision, Opposition leaders entered the well of the House.

The new law bans all forms of cattle slaughter and has designated it as a cognizable offence, that is, the arrests made under it do not require court warrants.

The Bill had been passed in the state Assembly in December 2020 but was not tabled in the Council as the BJP had not commanded a majority in the house at the time. The Bill’s passage was facilitated by the recent ouster of chairman Prathapchandra Shetty of the Congress.

The new law bans all forms of cattle slaughter and has designated it as a cognizable offence, that is, the arrests made under it do not require court warrants. The stringent punishment includes imprisonment of up to seven years or fines between Rs.50,000 to 5 lakh or both.

The Bill has been opposed by butchers, farmers’ unions and human rights activists on the grounds that it will hurt several groups grievously including the Qureshi butcher community.

Farmers too will face pain from the new law as it will require them to look after old and ailing cows. J.M. Veerasangaiah, working president of the Karnataka Rajya Raitha Sangha had issued a strongly worded statement saying, “Somehow, the BJP’s ideology wants us to feel that vegetarianism is supreme whereas non-vegetarianism is bad, but how will the poor, Dalits and religious minorities get nutritional food without beef?”

The primary concern expressed by the opposing Congress and JD(S) leaders is the misuse of the Bill to target minorities in the state.

C. M. Ibrahim, a Congress member of the MLC argued that it would also be detrimental to the state’s agricultural economy.

According to a report by The Wire, Karnataka has had a long and violent history with cow vigilantes against the consumption of beef. It cites mob violence against a father and son duo in March 2005, by members of the Hindu Yuva Sena, Bajrang Dal and the Vishwa Hindu Parishad.

Others like B. K. Hariprasad, another Congress leader alleged that the passage of the bill is only an extension of the BJP’s ideological agenda. A similar sentiment has been expressed by Nasir Ahmed who argued that the move would give gau rakshaks (cow vigilantes) immunity to inflict violence on anyone under the guise of cow protection.

A statement denouncing the Bill as discriminatory was also issued by the state convenor of the Dalit Sangharsh Samiti, who said that the constitution has given all communities the right to eat as per personal choice, and food culture is part of their identity. It further alleged that “they [the BJP] show that they are targeting Muslims, but their real target is Dalits.”

According to a report by The Wire, Karnataka has had a long and violent history with cow vigilantes against the consumption of beef. It cites mob violence against a father and son duo in March 2005, by members of the Hindu Yuva Sena, Bajrang Dal and the Vishwa Hindu Parishad. Both sustained several internal injuries due to physical abuse and were paraded naked for hours by the mob. Similar is the story of Azaruddin, who was attacked and killed near Kundapur by a mob of cow vigilantes while transporting legitimately purchased cattle.

The concerns around the Bill were largely disregarded as Animal Husbandry Minister Prabhu Chauhan expressed happiness over it being passed. He further commented that it greatly strengthened the government’s cattle conservation efforts. Hariprasad pointed out that the BJP has supported slaughter in Manipur, Kerala, Goa and Meghalaya.

Why is Cow slaughter not banned in Goa even though @BJP4Goa is in power? Why only in Karnataka?

Leaders from Muslim community shared their concerns about the impact on their livelihoods if ban on cow slaughter is implemented.

Earlier in January, the Karnataka government had passed an anti-cow slaughter ordinance that offered protection to those acting in good faith to save them, while inviting harsh punishment for anyone accused or suspected of cattle slaughter. The ordinance received quick approval from the governor.