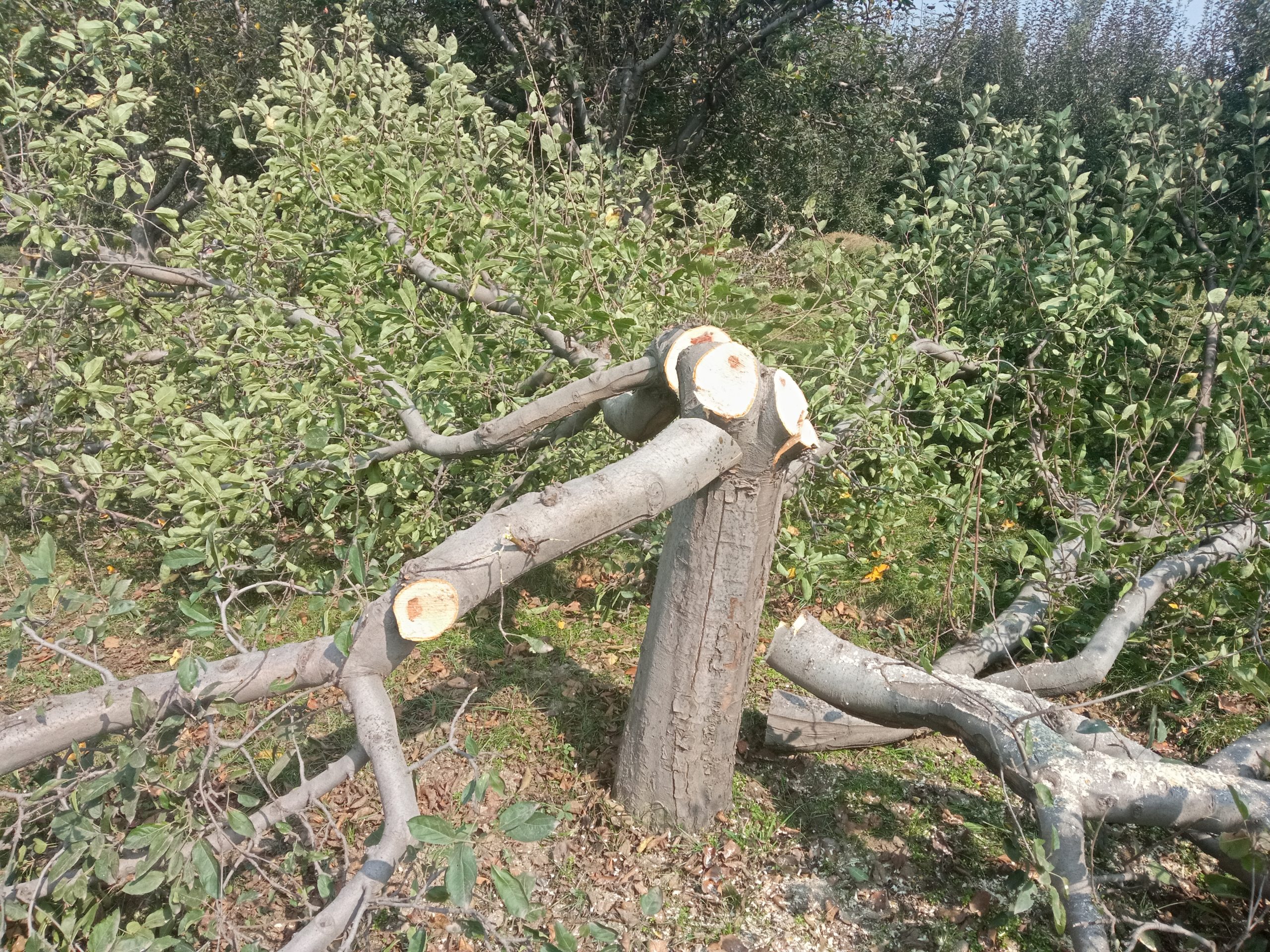 Srinagar Ring Road project is depriving farmers of their livelihood

Despite the abrogation of Article 370, the government in Jammu and Kashmir, instead of applying the central law on land acquisition, continues to apply outdated rates to assess the compensation due to farmers while expropriating their orchards. RAJA MUZAFFAR BHAT writes about the situation on ground and his recent interaction with the Union Home Minister.

IN February this year, I had written a piece in this publication titled “Life after Article 370: Orchards of Distress”. In the article, I highlighted how vague assessments were being made regarding the compensation due to the fruit growers of Kashmir, by authorities in Jammu and Kashmir. The farmers, mainly the apple growers and some plum farmers, whose land falls within the scope of the Srinagar Ring Road project, are in a state of shock, as hundreds of their fruit trees were axed recently in the villages of central Kashmir’s Budgam district.

I was under the impression that before axing the trees, the government would, at the minimum, make sure that affected farmers would be compensated as per the existing market rate of the fruit. However, this has not been the case.

From 9 October, 2021 onwards, authorities used motorized saw machines to axe fully grown apple trees that were 20 to 25 years old. Hundreds of trees were chopped down in the Gudsathoo and Budibagh villages located on the outskirts of Budgam town. When the poor apple farmers tried to show resistance, the National Highway Authority of India (NHAI), along with the District Administration of Budgam, used force to ensure the felling of the trees. The farmers had been paid compensation for these trees back in 2017-2018.

They accepted the money under protest, after being assured that fresh assessments would be conducted once the government came up with new rates for fruits as per existing market value.

The said file is collecting dust at the Horticulture Department of the Civil Secretariat. In fact, I along with some aggrieved farmers, had personally been assured by the former J&K Horticulture Minister, Syed Basharat Bukhari, that rates would be revised. However, only a few months after this assurance, the PDP-BJP government in J&K collapsed in June 2018.

The farmers were paid compensation as  per the rates applicable in 1995, when apples, pears, and plums were sold at INR 16, 14, and 13 per kilo respectively in the wholesale market. The J&K government has not revised these rates since, and farmers have been forced to accept 26 year old rates. One wonders whether government officers, and more importantly, the District Magistrate, Budgam, would agree to be paid salaries based on the Fifth Pay Commission’s report from over two decades ago.

The affected farmers also sought judicial intervention by moving the J&K High Court. However, the resultant fresh assessments by the officials were once again made as per 1995 rates. The farmers have held several protests over the last four years, but to no avail. They now fear that further protests may result in them being booked under the Unlawful Activities Prevention Act, 1967 or the Public Safety Act, 1978.

Farmers from Budgam like Bashir Ahmad are further distressed by the horticulture department’s assessments. His fully grown plum trees fetch him between 100 and 120 kg of fruit. However, the officials, on paper, have indicated that the yield is a mere 15 kg per tree.

“The horticulture officers from Budgam took bribes from many farmers and enhanced the volume of their fruit trees. As I didn’t pay them anything, my compensation case was further spoiled by these corrupt officials four years back. I only got Rs 4,000 to 4,500 per tree as compensation while the fruit from each tree fetches me Rs 8,000 to 9,000 every year. My fruit trees are yet to be axed, but I am worried that very soon, the NHAI might come to my orchard and axe my trees. I appeal to the government to come to my rescue,”  said Ahmad while speaking to The Leaflet.

The Srinagar Ring Road passes through Budgam district, where more than 600 acres of farmland would be acquired by the National Highway Authority of India (NHAI) to construct an approximately 62 km stretch of road.

Meeting with the Union Home Minister

Recently, Union Home Minister Amit Shah was on a three-day visit to Jammu & Kashmir. I got a chance to meet him in Srinagar, along with a delegation of some eminent citizens, led by former IAS officer Khurshid Ganai, who also served as State Chief Information Commissioner and Advisor to former J&K Governor, N.N. Vohra.

During our meeting, I vehemently raised the issue of the forcible land acquisition by the NHAI in Budgam and the non-application of the Right to Fair Compensation and Transparency in Land Acquisition, Rehabilitation, and Resettlement Act, 2013 in J&K post the abrogation of Article 370. The Home Minister seemed optimistic about the application and implementation of the central land acquisition law in J&K, and assured that justice would be done. Once I explained the current situation regarding the axing of trees based on outdated compensation rates, he asked for a written representation from me. Fortunately, I had one at hand, ready to be submitted.

I got a very positive response from the Home Minister, as well as Lt. Governor Manoj Sinha, who was also present at the meeting. In fact, LG Sinha said he would formally meet me later to discuss these issues.

Earlier, the affected farmers and I were under the impression that the Union Home Ministry had played a part in force being exerted on the farmers, but based on our interaction with the Home Minister and Lt Governor, it appears that the non-implementation of the Right to Fair Compensation Act vis-à-vis the Srinagar Ring Road project is a decision taken by some bureaucrats. As the Chief Secretary, Home Secretary, Revenue Secretary, and Kashmir’s Divisional Commissioner were all present at the meeting, one can expect that they have received the message that any land acquisition must take place within the scope of the pro-people central law, and without the use of force.

A Srinagar based English daily recently reported that Kulgam district in South Kashmir has lost 50 percent of its paddy land, much of which has been converted into apple orchards. Kulgam used to be known as the rice bowl of Kashmir more than 25 years ago. The report said that 22,000 hectares of land in the district is presently under paddy cultivation, which yield INR 237 crore annually.

While this is not a good trend, it is evident farmers feel safe as growing apples is itself a farm activity. When the paddy land, vegetable farms or apple orchards are bulldozed and converted into highways or shopping malls, it is painful.

The government needs to be backed by a major increase in responsible investment and strong support to reduce the negative environmental and social impacts.

This is not at all taken into consideration in the environmentally fragile Kashmir Valley, especially during the land acquisition process. Mountains are being blasted along the Srinagar-Jammu Highway (NH-44) and all the muck is dumped into the Chenab river. It will not be long before the river is converted into a drain. I raised this issue as well with Home Minister Shah.

The Kashmir Valley is losing its irrigated and fertile land. We are heading for a disaster as there will be an acute food crises in the valley after two decades.

70 or 80 years ago, Kashmiris were poor, but we were self-sufficient in rice, vegetables, poultry and mutton. Now, we have become a consumer society, with agricultural production diminishing drastically. The reason for this is haphazard development.

The authorities are unwilling to listen to the farmers. By constructing huge highways, dams or mega tunnels, or transferring huge chunks of land for setting up industrial estates in Jammu & Kashmir, the government is violating the United Nations Sustainable Development Goals and the National Land Utilisation Policy.

The Srinagar Ring Road project has snatched the livelihood of many families, as the government is unwilling to even pay them a fair compensation while expropriating their property.

(Dr Raja Muzaffar Bhat is Srinagar-based activist, columnist and independent researcher and is an Acumen India fellow as well. The views expressed are personal.)