Despite ownership rights being with farmers in J&K, the government is forcibly trying to acquire their lands for various mega projects. The acquisition should be in accordance with the Right to Fair Compensation and Transparency in Land Acquisition, Rehabilitation and Resettlement Act, but this has not been done, reports RAJA MUZAFFAR BHAT from Srinagar.

THE Jammu & Kashmir High Court has come to the rescue of 86-year-old Abdul Rahim Bhat and 10 others, mostly hailing from Ganderbal district of Kashmir, by preventing the district administration from forcibly acquiring their land.

The collector of Ganderbal had issued a notification for land acquisition almost four years back, but after issuance of Section 4 under the erstwhile J&K Land Acquisition Act 1934, the notification under Section 6 was not issued.

The High Court bench, headed by Chief Justice  Pankaj Mittal and Justice Sanjay Dhar, said that as no declaration has been made under Section 6 of J&K Land Acquisition Act 1934 (now repealed ),  the notification issued under Section 4 is simply a proposal to acquire the land.

The bench disposed of the petition and asked the respondents (the government) to proceed in accordance with the law if it was in need of the land for a road-widening project.

“Accordingly, the writ petition stands disposed of with a liberty to the respondents to proceed in accordance with the law, if necessary, to acquire the land leaving it open for the petitioners to challenge the acquisition proceedings as and when the final notification to acquire the land is issued by the respondents. It is made clear that as the land has not been finally acquired, the ownership/ title of the land has not passed to the respondents and the petitioners are free to use it in the manner they so desire. 5. The writ petition is, accordingly, disposed of.”

If a fresh notification for the land acquisition is to be issued, it has to be done in accordance with the Right to Fair Compensation and Transparency in Land Acquisition, Rehabilitation and Resettlement Act, which is applicable in J&K post Article 370 abrogation.

This law is among others that could have benefited the people of J&K. But the government is being accused by farmers of not applying this law in many cases of land acquisition. In fact, the aggrieved persons, Abdul Rahim Bhat, and others, had gone to the High Court with the same prayer.

Syed Nasarullah, a retired administrative officer in the J&K Judicial Services, said: “The collector, land acquisition, Ganderbal, cannot issue Section 6 notification under the J&K Land Acquisition Act of 1934 as the same is no more in operation post Article 370 abrogation. Now a fresh notification has to be issued under the Right to Fair Compensation law only, which is enforced in J&K with effect from October 31, 2019.” 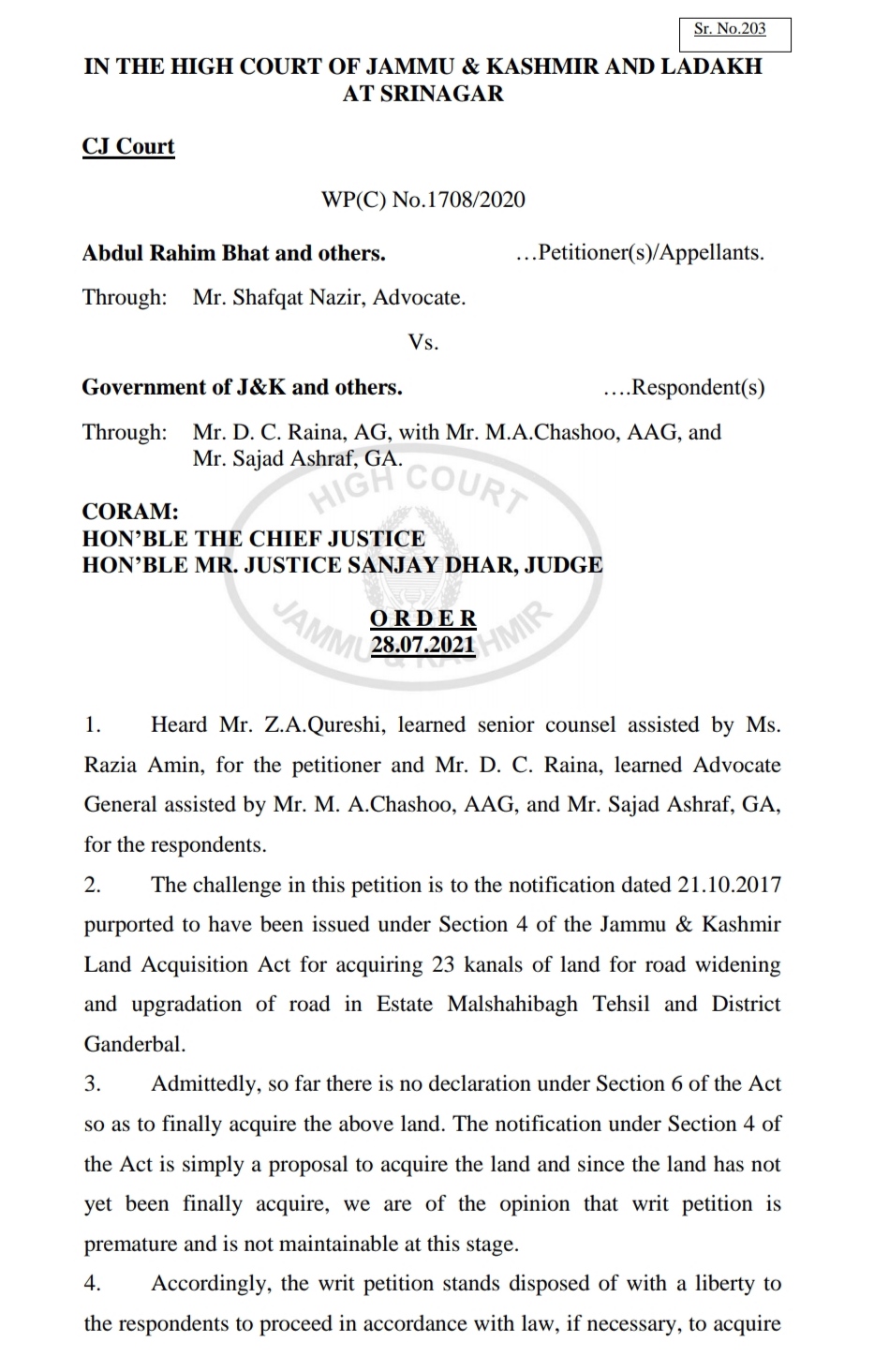 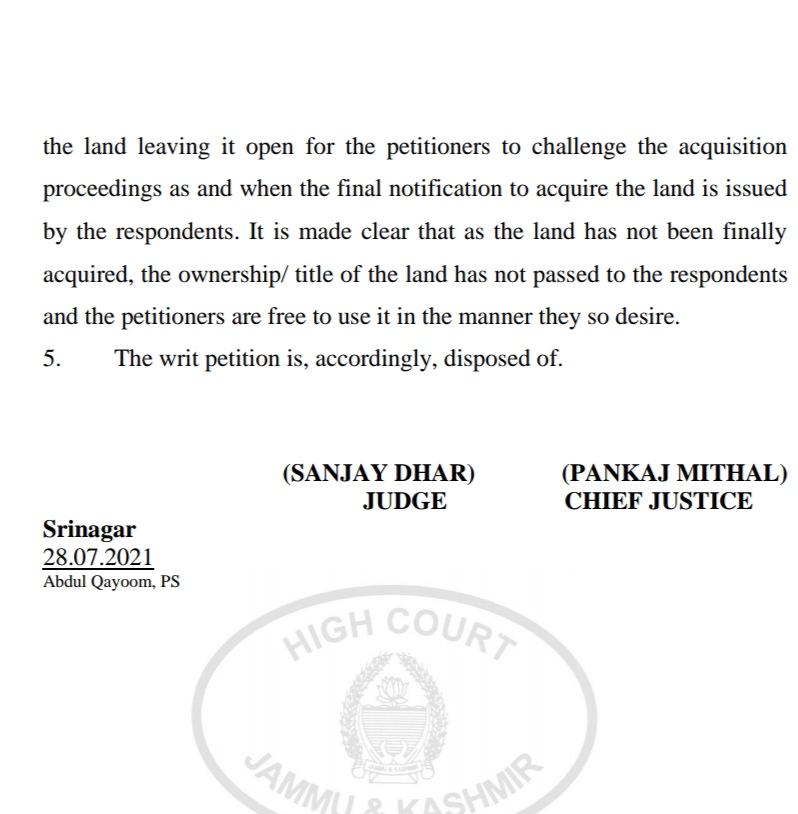 The collector issued a notification under Section 4 of the J&K Land acquisition Act 1934 on October 21, 2017. He expressed an intention to acquire around 23 kanals of land (three acres approximately) for widening, construction and upgradation of the Pandach-Beehama Ganderbal road in Malshahibagh estate tehsil, district Ganderbal. 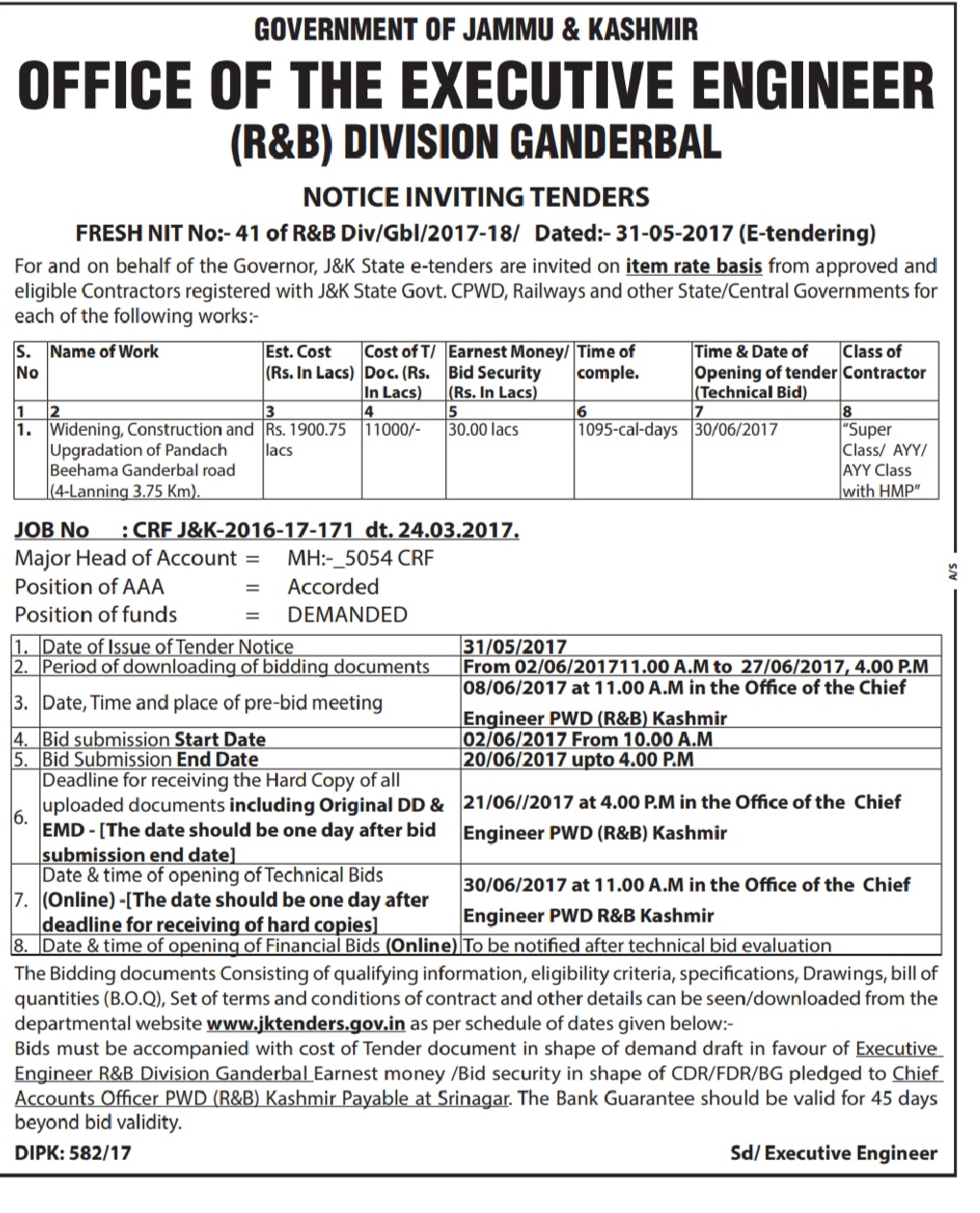 Ironically, much before the notification of Section 4, the collector, in association along with the chief engineer, PWD Roads & Buildings Kashmir and executive engineer, PWD (R&B) Ganderbal, issued a tender under No: Fresh NIT 41 of R&B /Gbl/2017-18 dated  31.05.2017.

E-tenders were invited from prospective bidders for the construction and widening of the proposed road. The estimated cost of the project was Rs 1,900.75 lakh. Prior to the issuance of the NIT, the district collector/deputy commissioner Ganderbal and executive engineer, PWD (R&B) Ganderbal, had prepared a detailed project report for execution of the work. This was presumably under the misconceived notion that the entire land for construction of the proposed road was the sole property of the government and not of any individual.

It was only during the erection of the alignment posts through the private land of Abdul Rahim Bhat and others that they became conscious about the alleged land grabbing by the district administration of Ganderbal.

When they raised their voice and went to meet the district administration, the latter issued a land acquisition notification under Section 4 in October 2017, i.e., six months after floating of the NIT by PWD (R&B).

Shafqat Nazir, the advocate pleading this case told The Leaflet: “The land acquisition proceedings initiated by the then collector, land acquisition  Ganderbal, along with his boss, the deputy commissioner, Ganderbal, or even the chief engineer, PWD (R&B), were unconstitutional and illegal.

The Section 4 notification was issued after the NIT had already been issued by the indenting/ executing department. Though the notice under Section (4) of the repealed J&K Land Acquisition Act 1934 was issued in 2017, no further steps for completing the land acquisition proceedings were taken. As such, the purpose of issuance of the Section 4 notification has been rendered redundant and this was viewed seriously by the High Court division bench which called the notification simply a proposal to acquire land.”

Nazir, an advocate in the J&K High Court, who has been pleading this case, said: “It was mandatory upon the collector to issue Section 6 notification and then he has to make an award within two years. If the award is not made by then, the entire land acquisition proceedings become null and void.”

A similar fraud is being committed by the district administration of Budgam on the direction of the government to forcibly acquire some 500 acres in Budgam district for construction of the Srinagar Ring Road.

The affected farmers want an application of the Right to Fair Compensation Act just as the affected parties in Ganderbal want.

The notification for the Srinagar Ring Road project under Section 4 was issued on March 20, 2017, for village Wathoora in Budgam. The declaration under Section 6 was made in August 2017. It was thus mandatory for the collector, land acquisition, Budgam, to finalise the acquisition process and make an award before August 2019 (within two years).

Section 11 of the J&K’s repealed land acquisition act of 1934 mandates the acquiring authority to complete proceedings within two years of declaring an intent to acquire the land under Section 6 of the Act.

If it fails to do so, the notification and proceedings lapse according to Section 11-B of the 1934 Act (now repealed)

After four years of issuance of the Section 6 notification, if the government wants to invoke the repealed J&K Land Acquisition Act 1934, it can be called a legal fraud and deceit. It was also incumbent upon the collector to notify the award, according to the repealed J&K Land Acquisition Act 1934, which says that the award of the collector would be final when:

(2) The Collector shall give immediate notice of his award to such persons interested, as are not present personally or by their representatives when the award is made.”

However, the collector, land acquisition, Budgam, did not at any point notify the aggrieved farmers that any award was made by him in respect of their land intended to be acquired within two years.

Even until July 31, 2021, the final award has not been made public in most of the villages in Budgam. Everything is being done in total secrecy. Not even an oral notice was issued to the affected people to attend the collectorate to receive the award.

Therefore, a fresh notification has to be issued for the acquisition and compensation, but the government is not ready. Unfortunately, the High Court’s interim orders issued in Abdul Salam Bhat, G A Paul and Ali Mohammad Akhoon V/S UT of Jammu & Kashmir, are not respected.

In many villages such as Khanda , Gund e Kuzwera, Ganji Bagh, Ichgam, Dharmuna and others, the National Highway Authority of India with the help of district administration, Budgam, is allegedly trying to take land into possession using force.

In many cases, people haven’t been paid any compensation and in some cases, some part of the compensation was accepted by farmers under protest.

In these three orders, the High Court asked the government to maintain status quo and in Abdul Salam Bhat’s case, it even directed that a fresh notification be issued for Wathoora village if the government needed the land for the project as none of the farmers in this village had received compensation and were still in physical possession of the land.

The J&K High Court order on forcible land acquisition in Ganderbal has given some hope to affected landowners. The judiciary is the only hope for aggrieved farmers to get fair compensation during a land acquisition process. It is hoped that this order is respected by the government and a fresh notification is issued under the Right to Fair Compensation Act not only for road widening in Ganderbal but for megaprojects like the Srinagar Ring Road project as well.