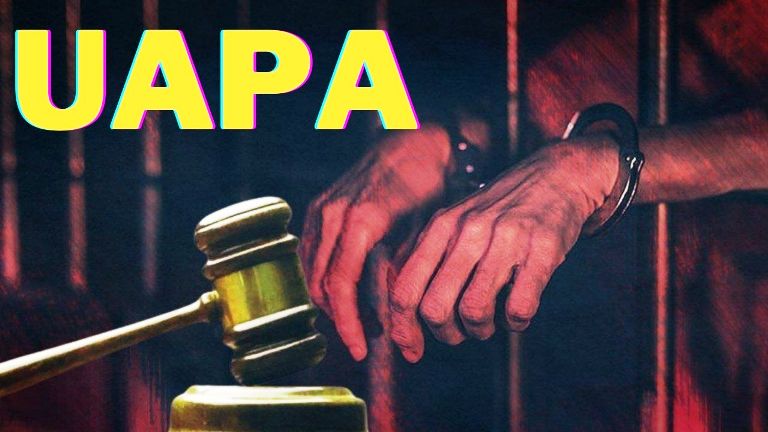 PUCL and 100 Organisations demand the repeal of the UAPA

Activists, Advocates and commoners came together virtually to discuss and demand the repeal of the UAPA and underlined the legal, socio-cultural issues around it in a consultation organised by the People’s Union of Civil Liberties. The Leaflet was its media partner.  PARVATHI SAJIV reports.

IN a session packed with human stories of abuse and misuse of law where activists and commoners were abused, the People’s Union for Civil Liberties (PUCL)  began a three-day session on January 20th with over 100 other organisations comprising advocates, activists and others who spoke about the Unlawful Activities (Prevention) Act.

The session began by drawing a timeline of the evolution of UAPA since the 1980s tracing its roots back to Terrorist and Disruptive Activities (Prevention) Act (TADA) to coming around of the Prevention of Terrorism Act, 2002 (POTA).  This helped non-lawyers understand how the UAPA took the shape that it is in today.

The PUCL National General Secretary and human rights lawyer Dr V Suresh said that POTA was repealed the morning the government decided to amend the UAPA.

Introducing definitions borrowed from POTA, UAPA suggests that the Court may form an opinion based on the material in its broad possibilities. The Court is to apply its mind to ascertain whether the accusations against the accused are prima facie true.

Given the prima facie nature of UAPA, chances are that even if a charge sheet is filed, the accused will find it nearly impossible to get bail. This process can extend up to 10 years before a person can receive bail under the UAPA.

A charge sheet usually needs to be filed within 60 to 90 days, depending on the offence. But under the UAPA cases, agencies have 180 days or 6 months to file them. The conviction rates under UAPA in 2018 shows 68% of the people arrested didn’t have a charge sheet filed. One cannot apply for bail until the charge sheet is filed.

Given the prima facie nature of UAPA, chances are that even if a charge sheet is filed, the accused will find it nearly impossible to get bail. This process can extend up to 10 years before a person can receive bail under the UAPA.

HOW UAPA AND NIA  CHANGED THE GAME

Senior Advocate Mihir Desai, Vice President of PUCL, discussed the amendment made to the UAPA in 2008. The 2008 amendment gave authorities the power to detain persons without charge and increase the duration of police custody from 15 days to 30 days.

The same year, the National Investigation Agency (NIA) was set up under the control of the Central Government to investigate the scheduled offences under which UAPA and sedition belong. In major cases, the CBI carries the investigations forward with the consent of the particular state. Since the NIA works under the Home Ministry, states do not get a say in the matter.

Mihir Desai brings up the Bhima Koregaon incident as an example to illustrate. What was initially investigated by the Pune Police eventually shifted hands to the NIA once the ruling party of the state was different from the one that was at the Centre.

Guneet Kaur spoke of the current investigations against certain people by the NIA during the farmer’s protest.  She observed, “With the BJP IT Cell trying to spin their narrative of Khalistani involvement and the lack of mainstream media’s coverage of the farmer’s protests in showing the true side, the NIA investigation seems to be the legal wing in their continuous attempt at narrative deflection.”

Another feature from 2009 along with the UAPA amendment was the NATGRID or National Intelligence Grid which is to collect information and supply it to eleven different intelligence agencies such as NIA, CBI and RAW. This information includes details such as transactions, credit card payments among others.  Thus, the UAPA amendment and the NATGRID can be used to keep the people under surveillance and decide who the dissenters are and otherwise.

“The execution of the NATGRID will question the Puttaswamy judgement passed in 2017, where privacy was recognised as a fundamental right,” said Senior Advocate Mihir Desai.

The session was moderated by PUCL’s Kavita Srivastava who got various activists as well as victims of UAPA to narrate their experiences. She commented, “ It is to do with the culture that is being spread where security agencies and such laws are being used to keep people in control, and we should keep this in mind and hold, not just the BJP led government, but our state governments as well.”

VICTIMISING THE MARGINALISED WITH UAPA

Advocate Madhava Rao Gorrepati from Nizamabad who is a member of the Human Rights Forum spoke about the shocking modus operandi of the police team as they arrest people under the law.  “The police tries to find evidence in the form of literature, or content in a pen drive to put the alleged accused in jail. Most of the accused are the sole breadwinners of the family and given the impossibility of bail, they choose to not engage as a voice of dissent in fear,” he said.

In Visakhapatnam alone, more than 450 cases were filed against 150 tribals with the police hoisting more than 5-10 cases per person.

The session focussed on the state-wise issues starting with Telangana, as K Kranthi Chaitanya from the Civil Liberties Committee of Andhra Pradesh shared the data of the number of members of the tribal community being arrested. In Visakhapatnam alone, more than 450 cases were filed against 150 tribals with the police hoisting more than 5-10 cases per person.

As the police seek evidence as well as alleged accomplices, they try to evince the presence of various other targeted activists in the area under UAPA. Chaithanya said, “In Machinga Puttur district of Visakhapatnam, 64 persons in a single case were arrested. Among the people arrested were State President Chittu Babu who was accused along with  members of the Human Rights Forum, trade unionists, and people from women’s organisations. The motto of the state is to arrest those who are raising a voice to repeal  UAPA.” This incident shows how the UAPA can be misused to crush the voice of dissent.

Activist Raghunath Verose underlined the importance of doing away with these draconian laws. He said, “As the law continues to attack people such as activists, well-educated lawyers and professors, this is seen as an attack on critical thinking and freedom.”

Ravi Narla, a victim of UAPA, recollected the day the police raided his house. This coincided with the day Narla was supposed to hold a press conference about the Babri Masjid Case. Narla was accused of organising mass mobilisations post Varavara Rao’s arrest.

Swetcha Prabhakar spoke of her father, D Prabhakar, the President of the Kula Unmulan Pareta Samiti who was fighting for the rights of the Dalit community in Vijayawada. In 2005, the police arrested him along with seven others who were going to testify against the ongoing trial of the tribals in Chhattisgarh. They were charged in over with over 8 illegal cases and dubbed Maoists by the authorities.

Apoorvanand, an academic, spoke of dual issues surrounding the state’s actions. At the heart is the anti-CAA protests coupled with the recent farmers’ protests. He said that reasons such as the deep-rooted desire to malign the nation and conspiracy theories are being used to file FIRs against people who mostly belonged to the Muslim community.

Taking the conversation ahead, Advocate Shahrukh Alam spoke of FIR No. 59 filed under UAPA in the Delhi Riots case against many activists who were part of the anti-CAA protests. The FIR uses the word ‘propaganda’ to make a political assertion which makes the FIR inherently political. There is no allegation in the FIR about directly instigating violent action. FIR 59 franes the protests in a particular way and thus connects it to violence in Delhi, she said.

Advocate Alam drew a parallel with a similar case in the Supreme Court of United States Deray McKesson v. John Doe. Deray McKesson, a Black Rights Movement Activist, had called to occupy a highway that lead to the police headquarters at Baton Rouge, Louisiana. During this protest, a protestor pelted a stone against the police officer who decided to sue Deray McKesson for civil damages. One of the questions before the Supreme Court of the United States was whether violence can be a presumed possibility on account of recklessness and negligence in organising the protest. To this, the Supreme Court responded that to say there is a presumption of violence is absurd.

This is in stark contrast to the decision in India during the Shaheen Bagh protests, said Advocate Alam. Even in farmers protests, they are being denied their right to protest citing ‘law and order’ that presumes violence. She asked, “How is it that peaceful constitutionally protected activity like protests has been conflated now with violent destructive terrorist activity?”

Journalist Sandeep Singh, who has been reporting every day from the Singhu border on the farmers’ protest, said that protesters are being served notices by NIA.

Nadeem Khan of United Against Hate pointed out the plight of the families whose members were being jailed and had to wait for more than 30-40 days for bail. Meanwhile, even more, people were being arrested.

Journalist Sandeep Singh, who has been reporting every day from the Singhu border on the farmers’ protest, gave details of how people are being served notices by NIA.  Local grassroots activists and writers of Dalit- Sikh history have been called in by NIA. Local journalists, diaspora Punjabi media, celebrities and even small businessmen who have been supporting langars and providing free buses have received notices from NIA on flimsy grounds.

“The national media isn’t covering the story in the right narrative and Punjabi media which is showing the narrative are being sent notices by NIA for investigation. They are even targeting organisations that weren’t even present in the protest,” he said.

The impossible situation of the UAPA suggests that the law needs to be done away with. Day 2 will be live-streamed on the PUCL Facebook and Leaflet’s Facebook page as they discuss the UAPA across several other states.

(Parvathi Sajiv is a journalism student from the Symbiosis Centre for Media and Communication in Pune and is currently interning with The Leaflet.)