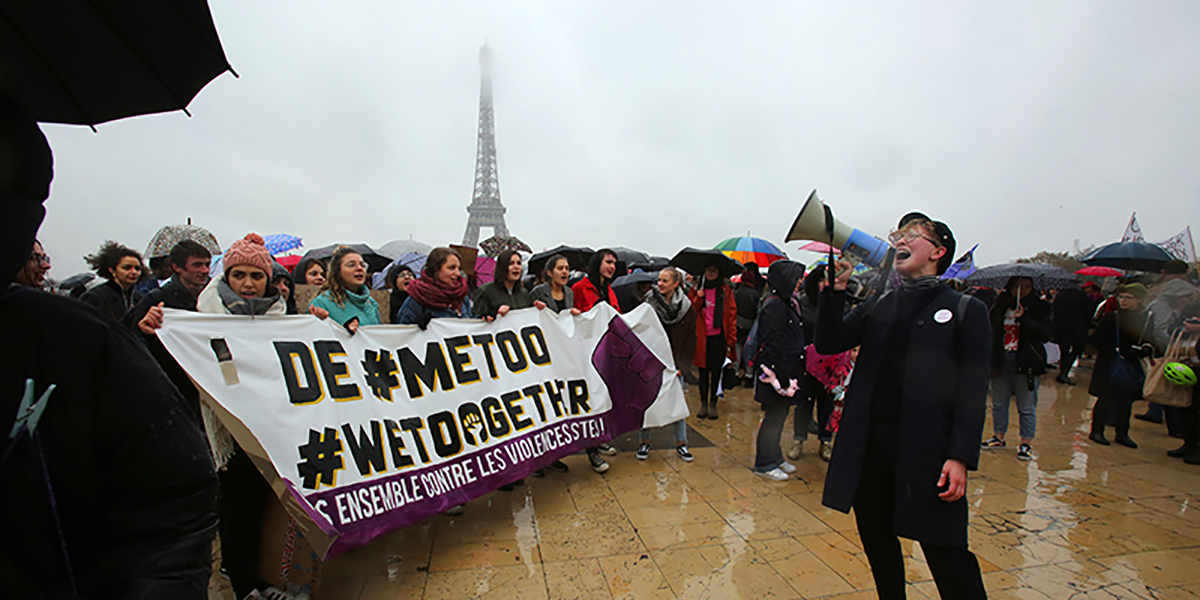 Global #MeToo was the first mass movement against sexual abuse

WE are in the middle of the first mass movement against sexual abuse in the history of the world. Global #MeToo sprung from the law of sexual harassment, quickly overtook it, and is shifting law, cultures, and politics everywhere. It also electrifyingly demonstrates in action what I’m calling “butterfly politics.”

In 1972, the scientist Edward Lorenz, trying to grasp how small seemingly insignificant things become cataclysmically big, asked, “Does the flap of a butterfly’s wings in Brazil set off a tornado in Texas?” Considering this, he conceived the “butterfly effect,” which charmingly models how some tiny simple actions, properly targeted within structural dynamics under the right conditions, can come to have complex large effects. Butterfly politics, applied to change in the gender system, including through law, means that the right small intervention in the structure of an unstable political system can ultimately produce systemic change. It proposes a theory of social change in power relations through activist law.

The early openings of the butterflies’ wings on sexual harassment were the legal, political, and conceptual innovations of the 1970s, setting the stage for the collective social intervention of the #MeToo movement that is shifting gender hierarchy’s tectonic plates.

To start with the why now question—to ask what made #MeToo possible—is to ask what, for the first time, made it harder to keep the sexual abuse inside than to put it out? The reverse has always been the case. It is also to look into #MeToo’s elements, what will extend it, what will keep it going.

One beginning point was the legal breakthrough that defined sexual harassment as sex discrimination, calling the experience and violation what it is: a vector and dynamic of structural inequality, specifically gender, with major white supremacist and class-based (poverty, economic vulnerability) dimensions.

Sex inequality is both complex and unstable. Complex due to its multiple interacting unequal variables: race, ethnicity, religion, class, disability, sexuality, and age.

These do a lot of their work through gender, and gender does a lot of its work through them. Unstable because it is based on a lie: that women are men’s natural inferiors, men women’s natural superiors, commonly termed “difference.”

Life refutes the lie of inferiority every day, which means it takes a lot of force to hold it together. This hierarchical system—superiority being above inferiority in value, worth, status, resources, power, despite some acknowledgment of its injustice, the human and civil right to equality supposedly makes it illegal—has proven extraordinarily tenacious.

Framed as inequality, sexual harassment stopped being something women (or anyone) just had to live through, breaking the age-old rule of impunity that the more power a man has, the more sex he can exact from those with less power. In this system, because sexual abuse is about power, it is about sex.

If all the sexual abuse reported in the #MeToo movement starting in late 2016 had remained effectively legal for the past forty-some years—as without sexual harassment law, most of it would have—this explosive movement against it would have been unthinkable, nor could it have been so volcanically effective. Without law delegitimising sexual harassment, calling it out for what it is in law—this is how law actually works in life—powerful men (and men have power) would not be losing their jobs, political and academic positions, deals, and reputations today.

The #MeToo moment also, obviously, built on decades of collective work against sexual abuse by groups and individuals, the leading ones being African American women: all the early legal cases, Professor Anita Hill’s testimony in 1991 against Clarence Thomas, Tarana Burke’s 2006 use of the phrase “me too” to call out the abuse of African American women and girls in particular; and the #SayHerName campaign. The “campus sexual assault” movement of the last decade or two is also a forerunner of #MeToo, combining legal initiatives with social media intervention, inspiring the investigation by the Obama administration of several hundred schools for inadequate response to sexual abuse on campuses.

Another crucial moving part in the U.S. awakening was the 2016 presidential election. Claims of sexual harassment by President Bill Clinton had, for many, previously identified the issue of sexual harassment with the Right’s use of it for political gain: a morality crusade rather than a matter of coercion and exploitation.

The election of Donald Trump reversed the relation of sexual harassment to conventional political alignments, redefining the democratic and liberatory potential of publicly claiming sexual victimisation.

Instead of interfering with a respected president’s desired policies and leadership, exposing these violations in one’s own life became a means of resisting the forces of darkness—misogyny, racism, authoritarianism, lies, stupidity, you name it. Even as the movement revealed that perpetrators of sexual abuse were not just those ugly men over there, but our nice men right here, this reversal of the conventional politics of the issue released a tsunami of enraged women.

This history placed Hillary Clinton in an awkward position as a presidential candidate. Who even knows what confronting sexual abuse on behalf of violated women, what Michele Dauber in this context calls “electoral kryptonite,”could have mobilised for her campaign? But what contributed to creating Trump as president—indifference to reports of sexual abuse—fuelled #MeToo in no small part because of its role in creating Trump as president. The point here is, for myriad reasons, if Hillary Clinton had been elected President, #MeToo would not have occurred. In other words, we are the backlash.