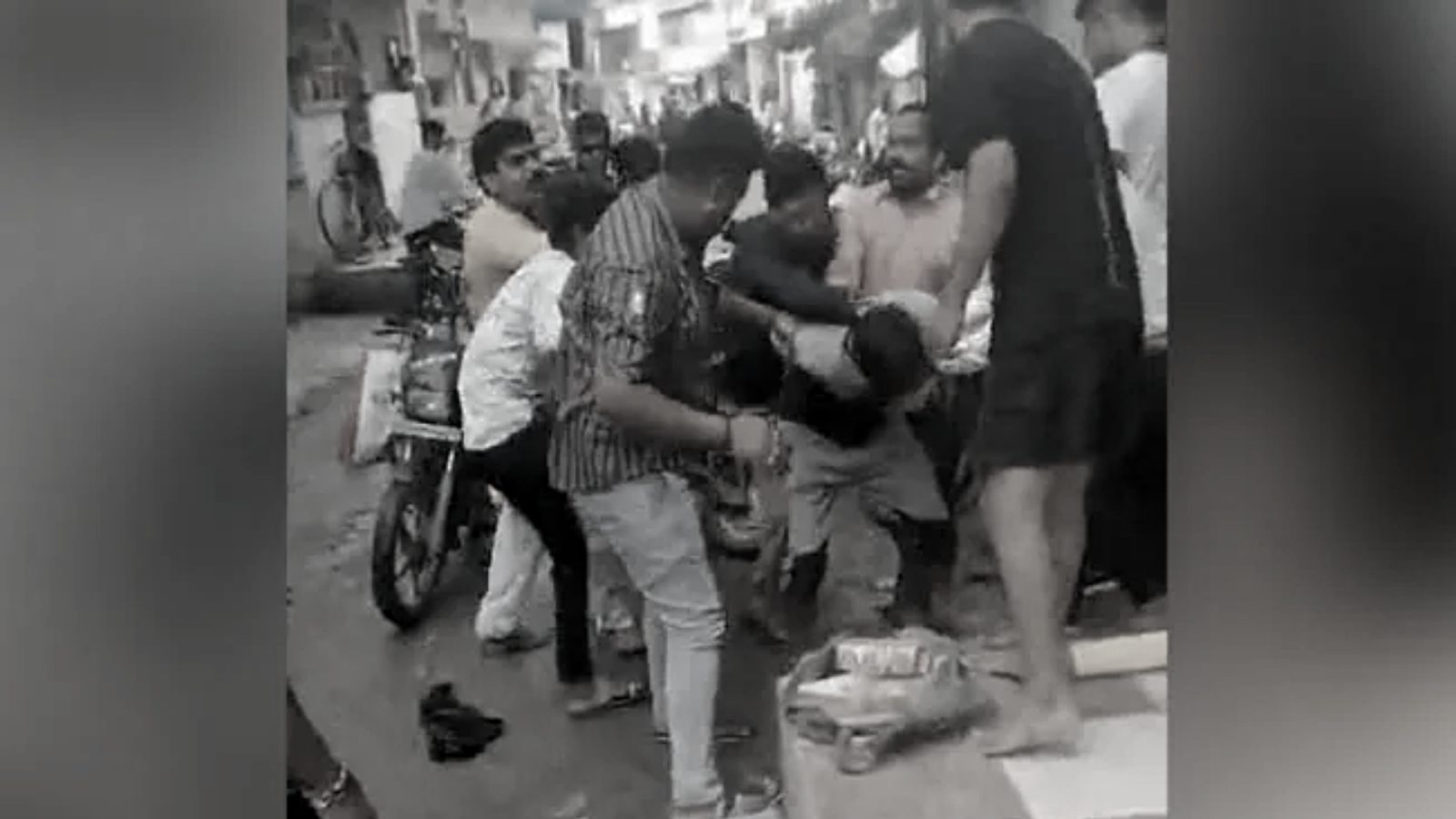 Ten persons in Indore have been sent notices for externment (exile) from six districts in Madhya Pradesh for allegedly gathering protesters outside an Indore police station. Such notices have been frequently employed to quell dissent, reports SABAH GURMAT.

MUMBAI: When Indore-based social activist Zaid Pathan went to assist a Muslim bangle-seller after a video of him being attacked became viral, little did he know that he would find himself being served with an externment notice and facing criminal investigation.

On August 22, 2021, the bangle-seller Tasleem Ali was attacked by a group of Hindu men in Indore’s Govind Nagar area. In a video filmed of the assault, the men can be seen accusing Ali of entering their “Hindu area” and purportedly harassing women under the guise of selling bangles, besides hurling communal slurs at him.

Soon after the video went viral, a crowd of protesters gathered around Indore’s Central Kotwali police station on the midnight of August 22-23, demanding the arrest of Ali’s assaulters.

Speaking to The Leaflet, Pathan notes how he, along with two members of the Social Democratic Party of India —  Mumtaz Qureshi and Abdul Rauf Belim —  decided to rush to the Central Kotwali police station to urge the police to register a First Information Report.

“The three of us reached the station, and the Additional Superintendent of Police Jaiveer Bhadauria finally co-operated with us to register the FIR, but a crowd of Muslims, who were naturally angry, had collected outside the thaana. We even appealed to the crowd to leave because the police seemed to have registerd the FIR. But the next day we found that police had registered an FIR against the three of us!”, said Pathan.

On August 25, all three were served externment notices under sections 5(a) and 5(b) of the Madhya Pradesh State Security Act, 1990.

In the two weeks since the attack, externment notices have been sent to seven others, including four men affiliated to the local Indian National Congress party branch. The notices seek to exile all those served from six districts: Indore, Dewas, Dhar, Khandwa, Khargone and Ujjain.

Noting how none of them have even received a copy of the FIR against them, Pathan added, “All ten of us are Muslims; many of us had also been active during the anti-CAA-NRC movement in Indore. This attempt to exile us is another way to silence any assertion by Muslims for their basic rights”.

Among the ten served notices of exile, the four Congress party members include Irfan Sheikh, the district president of Indore Congress’ Minority Cell; Dr. Aminul Khan Suri, a spokesperson of the party’s state unit; Amjad Mansuri, whose brother is a Congress corporator from the Chandan Nagar locality; and Rafiq Belim, a party worker. The remaining persons include social activists Azeem Bilal, Saeed Lodhi and Naushad Pakiza, along with Zaid Pathan, Mumtaz Qureshi and Abdul Rauf Belim.

In a statement delivered to reporters, Indore’s Superintendent of Police (SP) Ashutosh Bagri noted that three of Tasleem Ali’s attackers had been arrested. He added that an FIR had been registered against Pathan, Qureshi and Rauf Belim, as well as “25-30 other unknown persons”, for allegedly gathering unlawfully outside the police station in protest. The charges include sections 147 (punishment for rioting), 294 (punishment for obscenity), 341 (wrongful restraint) and 506 (criminal intimidation) of the Indian Penal Code.

Differential standards and a silent crackdown

For activist Azeem Bilal, the notices of externment are “extremely dubious”, because “at least two persons given notice were not even present in that locality” at the time of the protest. Bilal points to how the city’s Hindu Jagran Manch staged a protest rally outside the Deputy Inspector General’s (DIG) office on August 24.

“They were protesting against so-called love jihad. The police had already booked Tasleem under POCSO after allegations of identity-fraud and harassing Hindu girls; still they protested. Why has no externment notice been sent to these protesters, but only to us Muslims?”, asked Bilal.

He added that persons in the Hindu Jagran Manch rally were “only booked under Section 188 of the IPC”, pertaining to disobedience to a public servant.

Meanwhile Madhya Pradesh Congress spokesperson Bhupendra Gupta claimed that the Bharatiya Janta Party is “trying to polarise the people in light of the upcoming elections in Uttar Pradesh.”

Speaking to The Leaflet, Gupta said “Such an attack is not natural; these incidents are unnatural. Even in Ujjain last month, there was that incident [where Muslims were booked for sedition and under the National Security Act (NSA) on a purportedly fabricated video]. There is a clear political interest to this, it is clear what they [BJP] are trying to do.”

Multiple attempts were made by The Leaflet to reach out to Indore SP Bagri and Collector Manish Singh to clarify why different charges were applied to protestors from different religious groups in this matter. This story shall be updated if they choose to revert.

Across India, provisions of externment laws deal with exile or “banishing” of a person from a specific geographical area. Laws such as the MP State Security Act, 1990, the Maharashtra Police Act, 1951, and the Telangana Prevention of Anti-social and Hazardous Activities Act, 1930 are some of the statutes used regionally to “banish” persons.

Externment notices are preventive in nature, and are seen as a way to protect witnesses, pre-empt any crimes or maintain public peace by sending a person accused of serious offences into exile from that area.

Under Section 5(a) of the MP State Security Act, the district magistrate is authorised to ‘extern’ a person “calculated to cause alarm, danger or harm to a person or property”. Further, Section 5(b) of this Act lists such offences punishable under the IPC which can lead to externment, including the offences of criminal intimidation and punishment for intention to ‘insult the modesty of a woman’.

Lawyer Ameya Bokil, co-founder of the Bhopal-based Criminal Justice & Police Accountability Project (‘CPAP’) notes how such notices are frequently used in Madhya Pradesh. Speaking to The Leaflet, Bokil said, “They can resort to this frequently because the entire process is with the executive. You have the proceedings before the Collector, then you get to appeal before the Divisional Commissioner, and then you have to resort to a writ petition. There’s no oversight by the district judiciary.”

Bokil observed that the executive influence points to political pressure in cases of externment as well as NSA orders. “The MP State Security Act is preventive, if somebody is likely to cause harm or alarm, or threaten witnesses. Similarly, NSA is preventive detention. These are commonly used as punitive measures, even though courts have said there is no reason to resort to such punitive measures”, he added.

In the aftermath of India’s anti-CAA-NRC protests, there were multiple reports of externment against protesters. In Gujarat, anti-CAA activist Kaleem Siddiqui was sent an externment notice in July 2020, banishing him from multiple districts in the state. The Gujarat High Court quashed his externment order in August 2021, more than a year later.

In October 2020, Mumbai Police sent notice of externment to 25 anti-CAA protesters, before eventually withdrawing the proceedings.

Bokil believes that the law has been disproportionately used against marginalised communities. “It is likely to be used against Muslim, Dalit, Adivasi and Vimukta (denotified tribal) communities. We have seen dozens of people from Bhopal’s Pardhi (a denotified tribe) community receive externment notices before assembly elections or general elections. No study exists of the people who get served these notices, but all of the cases we know from our own work have been of Vimukta communities”, he said.

In Madhya Pradesh alone, Bokil claims, that “as per the monthly data that MP Police releases on their website, there are almost 300 externment cases every month. That makes it 3,000-4,000 externment cases a year.” He added that while the exile notices can be challenged before the High Court, only “a handful of people, with resources and means to engage lawyers, can challenge it at that level.”

Meanwhile, even as the ten men await the proceedings before the Indore Collector on September 13, Pathan feels that “their (right-wing elements’) job has already been done”. Noting how authorities are “creating fear to stifle us”, Pathan expressed little hope.

“There is a clearly rising number of hate-crimes against Muslims in MP today. They are trying to silence any peaceful movement we organize for our dignity and rights”, Pathan lamented.