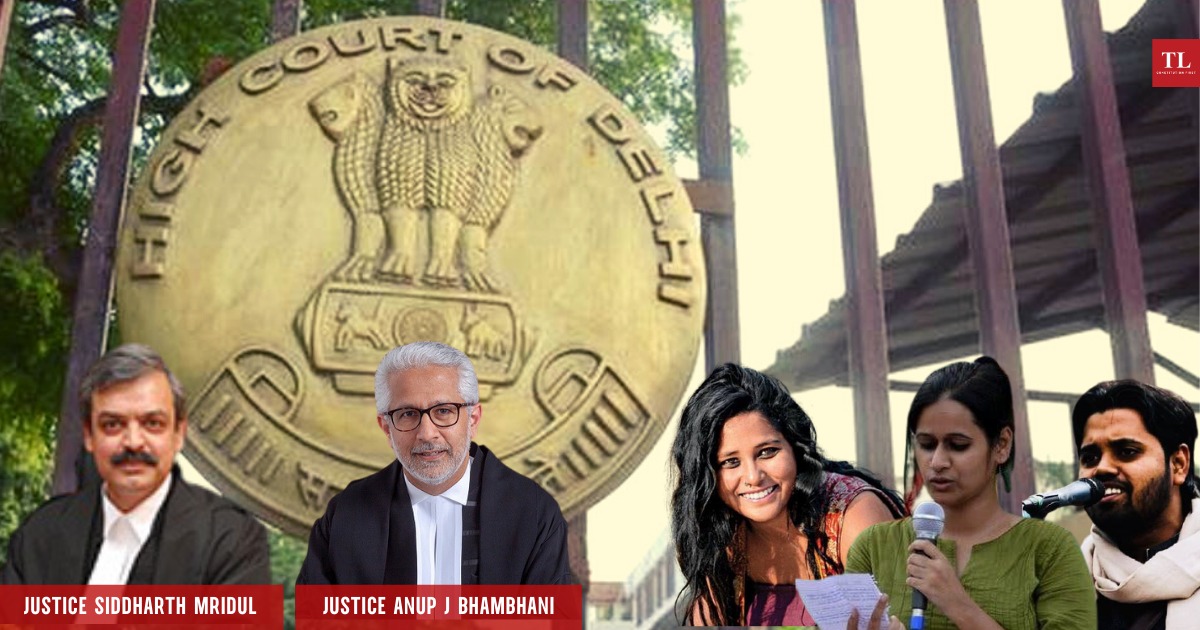 THE Delhi High Court, while granting bail to Delhi riots accused Asif Iqbal Tanha, Devangana Kalita and Natasha Narwal, flagged the frivolous invocation the of Unlawful Activities (Prevention) Act [UAPA] against people which, it said, would undermine the intent and purpose of the Parliament in enacting a law meant to address threats to the very existence of the nation. All three accused have been in jail for more than a year now.

“Wanton use of serious penal provisions would only trivialise them. Whatever other offence(s) the appellant may or may not have committed, at least on a prima facie view, the State has been unable to persuade us that the accusations against the appellant show commission of offences under sections 15, 17 or 18 of the UAPA”, the court said.

A bench of Justices Siddharth Mridul and Anup J Bhambhani went on to state, “…In its anxiety to suppress dissent… the State has blurred the line between the constitutionally guaranteed ‘right to protest’ and ‘terrorist activity’.”

In its anxiety to suppress dissent, in the mind of the State, the line between the constitutionally guaranteed right to protest and terrorist activity seems to be getting somewhat blurred. If this mindset gains traction, it would be a sad day for democracy, says Delhi HC. pic.twitter.com/FHkNrR5u5A

It said notwithstanding the fact that the definition of ‘terrorist act’ in section 15, UAPA was wide and even somewhat vague, “the phrase must partake of the essential character of terrorism and the phrase ‘terrorist act’ cannot be permitted to be casually applied to criminal acts or omissions that fall squarely within the definition of conventional offences as defined inter alia under the IPC.”

The Delhi police sought to argue that Section 15 of the UAPA which defines “terrorist act”, contemplated not only an act ‘with intent to threaten’ the foundations of a nation but also any act ‘likely to threaten’ such foundations.

The court rejected the argument of the Delhi police and said  “the foundations of our nation stand on surer footing than to be likely to be shaken by a protest, however vicious, organised by a tribe of college students or other persons, operating as a coordination committee from the confines of a University situated in the heart of Delhi.”

The allegations against Tanha, Kalita and Narwal are that they engaged in various steps and actions, the object of which was to organise a protest against the Citizenship Act and National Register of Citizens(NRC) and take it to a crescendo that would lead to a chakka jaam (traffic jam), so that supplies and services to the people of Delhi are adversely affected; and also to spread fear and cause riots. All the three are facing charges both under the Indian Penal Code(IPC) and the UAPA- a law in which grant of bail is almost difficult if the allegations are, prima facie, true.

The court held that the restrictions under Section 43D(5) of the UAPA would not be attracted since no prima facie case against the accused were made out on the basis of the charge-sheet and the material collected and cited by the prosecution.

The court also opined that even if it is assumed that in the present case the protest in question crossed the permissible limits and went into the forbidden realm of a non-peaceful protest, there was nothing to show that the government had prohibited the protest at the relevant time, much less was there anything to show that the appellant was the perpetrator or conspirator or was involved in any illegal protest.

Whatever offences are alleged to have been committed by reason of the protests having turned non-peaceful, the court said, was the subject matter of another FIR in which the accused was already granted bail.

HC: There is a complete lack of any specific, particularised, factual allegations, that is to say, allegations other than those sought to be spun by mere grandiloquence, contained in the charge-sheet that would make out a case under UAPA pic.twitter.com/l76whvyw0H

Click here to read the order in Asif Tanha case

Click here to read the order in Devegana Kalita case

Click here to read the order in Natasha Narwal case