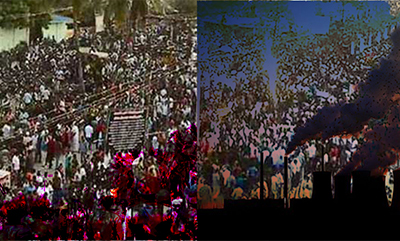 AnalysisDemocracy and Rule of Law

[dropcap]W[/dropcap]hat happened in Tuticorin on May 22, 2018, when the Tamil Nadu Police opened fire on the civilians protesting against Sterlite — a copper smelting plant owned by Vedcanta Limited—based in SIPCOT Industrial Complex, Melavittan village, Tuticorin Taluk in Tamil Nadu, exposes the facade of a State which is considered to be “for the people”. It is not for the first time that the State has protected giant conglomerates like Vedanta showing complete disregard for the common people. The government has time and again proved in different parts of country that the interests of the corporates are primary for the so-called “development” of this country and the people protesting such unethical and illegal degradation of our environment, human and labour rights are either “anti-national” or “anti-development” or both, and deserve to be eliminated.

Continuing the same modus operandi, Advocate S Vanchinathan, the state coordinator of People’s Right Protection Centre and a practicing lawyer at the Madurai Bench of Madras High Court, was arrested in the wee hours of June 21 (today) at around 1 am from Chennai Airport.

Advocate S Vanchinathan, the state coordinator of People’s Right Protection Centre and a practicing lawyer at the Madurai Bench of Madras High Court, was arrested in the wee hours of June 21

He has been accused of being involved in the protests against Sterlite. The Tamil Nadu state government has accused him of violating prohibitory orders and instigating protestors. On Monday, June 18, the Madurai bench of Madras High Court had dismissed his petition for anticipatory bail. He was charged in crime no. 190 of 2018 Sipcot Police station u/sec 147, 148,188, 353, 506(2) of Indian Penal Code and sec. 3 of Tamil Nadu Public Property (Prevention of Damage and Loss) Act, 1992.

On the arrest of Advocate Vanchinathan, environmental and civil rights activist Nityanand Jayaraman told The Leaflet: “Many more arrests are likely…I think the state is keen on teaching people a lesson and in warning people against protesting against any of its decision.” Jayaraman further said: “Hundreds are languishing in jail today.

“Many more arrests are likely…I think the state is keen on teaching people a lesson and in warning people against protesting against any of its decision.”

Police are specifically targeting members of Makkal Adhikaram (Peoples’ Rights).  One of them killed in the firing was also from this organisation.” Many have been booked under the draconian National Security Act (NSA).

Closure order and a leak

The closure order of the Sterlite copper plant by the Tamil Nadu government on May 28 endorsing the direction of Tamil Nadu Pollution Control Board was widely celebrated by the Indian civil society. The Madras High Court on 23 May has also put a stay on the construction aiming at doubling the capacity of the plant, which was the trigger of the recent strike starting in March. Vedanta’s appeal to renew copper smelter operations at the plant was rejected by the State Pollution Board in April this year, at the peak of the protest. On the 100th day of the protest, on May 22, snipers opened fire at the unarmed protesters, killing at least 13, exposing the State at its most macabre. On June 17, a government official reported a minor leak in the sulphuric acid storage plant from the shut copper smelting plant. Vedanta has claimed that unattended tanks of Sulphuric acid could lead to environmental catastrophe. The petition for immediate restoration of electricity is adjourned for a hearing on June 25 by a Division Bench in Madurai.

The Sterlite copper plant has been a bone of contention for years now with the residents of Tuticorin, resisting and protesting against the plant. As the resistance intensified, so did the oppression of the protestors, ultimately leading to open firing at the protesting, unarmed civilians by the State. But history of the same plant suggests that the factory has been, time and again, shuttled between shutting down and reopening by various orders of the courts and the Tamil Nadu Pollution Control Board.

According to Nityanand Jayaraman, the euphoria of the plant being “permanently” closed is in most probability a strategy to dissuade the protesting public. He writes:“Both orders are pathetically weak, poorly argued, legally fraught and fail to highlight the gross illegalities in Sterlite’s operations. TNPCB’s act of underplaying Sterlite’s illegality is akin to the police registering a weak FIR or filing a inherently flawed charge sheet in a criminal case. It allows the accused to seek and obtain relief on appeal. TNPCB’s current orders cannot be sustained on legal appeal.”

Vedanta Limited is an Indian subsidiary of Vedanta Resources Plc, a London-listed company, owned by Anil Agarwal, which claims to be “world’s leading natural resource company”, a mining and energy conglomerate, known not only in India but throughout the world. However, more than renown, Vedanta has gained more notoriety with its operations across continents, including Africa, Ireland (Europe) and Australia, having flouted labour laws, human rights and environmental regulations.

In fact, more than 2000 Zambian villagers have won the right to sue Vedanta Resources (London) in London for polluting their water and destroying their livelihoods through its mining operations. The government-run Norwegian Pension Fund blacklisted Vedanta for polluting environment in Vedanta’s three Indian subsidiaries — Lanjigarh Alumina, Sterlite Copper and BALCO in India, and Konkola Copper in Zambia from 2007.

Anil Agarwal, who started his business in 1979 by buying a copper plant, has a stake of 71.4% in Vedanta groups and is valued at $3.9 billion. Calling himself “self-made”, he rose from the scraps to becoming the czar of minerals, piggybacking on different governments who came into power in India, coupled with the liberalising policies that kicked off in the early 90s, paving the way for the disinvestment of Public Sector Units (PSU) like Bharat Aluminium Company(Balco), followed by many others.

Vedanta acquired 51% shares at a throw away price, thanks to the questionable largesse of the NDA-I government in 2001

The “self-made man” Anil Agarwal acquired already existing and functioning mines and production capacities. It started with BALCO, incorporated in the year 1965 as a PSU, which was the first PSU in which Vedanta acquired 51% shares at a throw away price, thanks to the questionable largesse of the National Democratic Alliance-I(NDA-I) government in 2001. The process continued with the acquisition of 64.9% shares of Hindustan Zinc Limited (HZL) – another PSU incorporated in 1966, which is an integrated mining and resources producer of zinc, lead, silver and cadmium — in 2002.

How the then Union Finance Minister,P Chidambaram aided Anil Agarwal in acquiring 51% stake in Sesa Goa

The 2007 acquisition of Sesa Goa under the United Progressive Alliance (UPA)-I tell tales of how the then Union Finance Minister,P Chidambaram — who has also been a non-executive director of the Vedanta Group before 2004 — aided Anil Agarwal in acquiring 51% stake in Sesa Goa, India’s top producer and exporter of iron ore. In 2012, it acquired 58.5% shares from Cairn India, an offshoot of Edinburgh-based Cairn Energy, heralding its entry into the oil sector. In 2017, Cairn India merged with the Vedanta Group. In June this year, Vedanta acquired management rights with 90% stakes inElectrosteel Steel Ltd (ESL), a subsidiary company of Electrosteel Castings Ltd, incorporated on December 20, 2006 as a public limited company. There are talks of acquiring the remaining shares of BALCO and HZL.

Vedanta had “donated” staggering amounts of funds to both the biggest national political parties, the Indian National Congress and the Bharatiya Janata Party, for contesting the 2014 Lok Sabha elections

It is a well-known fact that Vedanta had “donated” staggering amounts of funds to both the biggest national political parties, the Indian National Congress and the Bharatiya Janata Party, for contesting the 2014 Lok Sabha elections. In fact, in May 2014 when all eyes and ears were glued to the general elections, both the arch-rivals, Congress and BJP, found themselves together against the judgment of the Delhi High Court, which had found them guilty of accepting funds from Vedanta, till then a foreign company. It was against the provisions of the Foreign Contribution Regulation Act (FCRA), 1976 and Representation of the Peoples Act, 1951.

What happens when the government and big conglomerates begin to scratch each other’s back? What happens when the government in power, which is meant to protect the people, begins to protect corporate interests directly contravening democratic checks and balances? These questions merely remain rhetorical in today’s time. Corporates like Vedanta continue to violate human rights, cause degradation of the environment leading to mass health hazards, loss of livelihood, contamination of ground water with impunity and the regulatory arms of the government like pollution control boards, who are responsible for keeping check, become mere lackeys of the state-corporate nexus.

Sterlite Copper is a part of the same story. Since the inception of its operations in 1997, it has been violating environmental laws. Despite gas leaks, poor safety measures for the workers, contamination of ground water though it is located within 25 kilometres of four of the 21 islands in Gulf of Mannar that is an ecologically marine sensitive area, the smelter continued to operate.

In Sterlite Industries (India) Limited and others V. Union of India and others, Supreme Court had opined: “There is no doubt that there has been misrepresentation and suppression of material facts made in the special leave petition but to decline relief to the appellants in this case would mean closure of the plant of the appellants. The plant of the appellants contributes substantially to the copper production in India and copper is used in defence, electricity, automobile, construction and infrastructure etc. The plant of the appellants has about 1300 employees and it also provides employment to large number of people through contractors. A number of ancillary industries are also dependent on the plant. Through its various transactions, the plant generates a huge revenue to Central and State Governments in terms of excise, custom duties, income tax and VAT. It also contributes to 10% of the total cargo volume of Tuticorin port. For these considerations of public interest, we do not think it will be a proper exercise of our discretion under Article 136 of the Constitution to refuse relief on the grounds of misrepresentation and suppression of material facts in the special leave petition.”

Under the present circumstances, where on one hand mineral ownerships are liberally being privatised to companies like Vedanta, turning them into monopolies whose aims are profit-mongering with no other considerations, one is but left to wonder how the argument given by the Supreme Court stands in favour of the people and this kind of “development” narrative,so deliberately spun to absolve the private companies of their responsibilities.BALCO remains a classic example where a profit-generating PSU was handed over to Sterlite at a throwaway price. It was followed with workers being forced to take voluntary retirement, deterioration in working conditions and facilities leading to fatal accidents.

One begins to wonder, if it is we, the people or we, the corporates who hold the strings of democracy of this country.