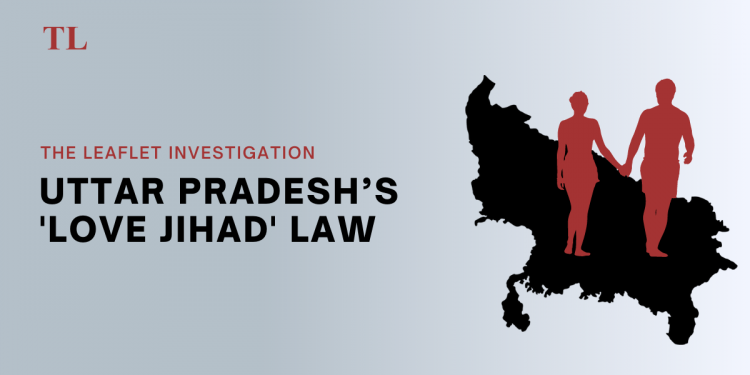 One year later: Married in a temple, wedded for over eight years, and a sudden FIR: How a Kanpur man was falsely booked under UP law against "love jihad"

On November 28, 2020, the BJP-led Uttar Pradesh government passed the UP Prohibition of Unlawful Conversion of Religion Ordinance with the aim to curb forced conversion. Dubbed the law against ‘love jihad’, the issue is one that has been raked up by various right-wing groups, as well as the UP Chief Minister Yogi Adityanath, on several occasions. With the law completing its first anniversary, and with more than 108 FIRs registered so far, THE LEAFLET investigates the impact of the law on the lives of accused individuals, interfaith couples and several others.
This is the second in a multi-part series of reports from the field. The first part can be accessed here.

IN July 2021, Uttar Pradesh’s Kanpur-based Sapna Rajput decided to make a video appeal of hers go viral. The 28-year old, an otherwise soft-spoken woman who sells flowers (for offering) outside the Tapeswari Devi temple in the city’s Pheel Khana locality, noted that she “had no choice” but to make this video following her husband’s arrest.

Just days prior to her video being shared across local media, on June 28, 2021, Sapna’s husband Naushad (who only goes by his first name), had been arrested on allegations of so-called ‘love jihad’.

In a first information report (FIR) lodged at the Pheel Khana police station, Naushad had been booked on charges of forced conversion under UP’s controversial new law against unlawful conversion, pejoratively dubbed the ‘anti love jihad’ law. The FIR charged him under Sections 3 and 5(1) of the UP Prohibition of Unlawful Conversion Act, along with Sections 323 (punishment for voluntarily causing hurt), 504 ( intentional insult with intent to provoke breach of the peace) and 506 (punishment for criminal intimidation) of the Indian Penal Code (IPC). Although the complaint had been filed by her, Sapna herself issued a video statement later, distancing herself from the same by pointing to how she was “forced” by local Bharatiya Janata Party (BJP) leaders to file a false conversion case against her husband.

Naushad, who spent 15 days each in police custody and in judicial custody at the Chaubeypur jail in rural Kanpur, is today a weary man. Speaking to The Leaflet, he notes how local BJP leaders decided to scapegoat him, seven months after the law had been passed in the state.

Sapna was married to one Nitesh Rajput at the age of 17 and had two children over the course of their marriage, even though they got divorced thereafter. Years later, the young mother-of-two met Naushad at a wedding function, and the two got into a relationship soon after. In January 2014, the two decided to get married, doing so at an Arya Samaji wedding in the city’s Bara Devi temple. Naushad works as an Omni van driver and today, he manages to make a living of Rs. 9,000 on an average each month.

“We are too poor, and this was done in haste against the wishes of both our families, so we never had official registration of our wedding”, Sapna said. She had been married to Naushad for over eight years and the couple was raising three children together – including two from her previous marriage, when some locals decided to intervene. On June 25, 2021, when Naushad was loudly scolding his step-daughter, the couple says that “local BJP leaders”, namely Pankaj Tiwari, Sanjay Mishra, and Archana managed to coerce the 12-year old daughter into saying that her stepfather had been beating her up.

The FIR notes that Naushad was abusive towards his daughter, and had hid his name and identity for several years. Claiming that Naushad went by the alias of Raj Thakur to ‘trick’ Sapna into believing he was Hindu for marrying her, the FIR pointed toward the incident of his treatment of his step-daughter as proof of his committing ‘love jihad’. The Leaflet tried to reach out to Tiwari, who remained unavailable for comment.

“Having a Muslim name, but following Hindu beliefs didn’t protect me”

Today, as Naushad finds himself out on bail, the incident continues to trouble him. “I still have to go to court even though the charges of love jihad have been dropped. My last date was December 10 last year; now again I have to present myself. Is this not a kind of harassment?”, a sapped Naushad asked.

But both Sapna and Naushad remain confused at why any charges persist. Pointing to how his parents cut him off ever since his marriage to Sapna, Naushad said, “I have been following Hindu festivals for a long while now. I never follow any Muslim rituals or beliefs. I have never done namaz, not even celebrated Eid, or met my parents since a long while. How am I cheating? And we have been married over eight years; why did they find a problem only now?”

The FIR also accused Naushad of forcing Sapna’s youngest son to undergo circumcision. Sapna vehemently denied the same and added, “I was threatened and coerced into signing this police complaint; none of this is true. Naushad never asked our son to be circumcised.” Yet for Naushad, his own beliefs matter little to how others perceive him. Sapna, who belongs to the Other Backward Class Lodh caste noted that “When some of the men in my locality get drunk, they start showing caste-pride and yelling slurs like ‘Aye, Mohammadan’ to my husband”.

An unfazed Naushad added, “I am here for my children. I have also told the people who taunt me that if they have so much of a problem with me, then go find me another bride. They never have an answer to that”.