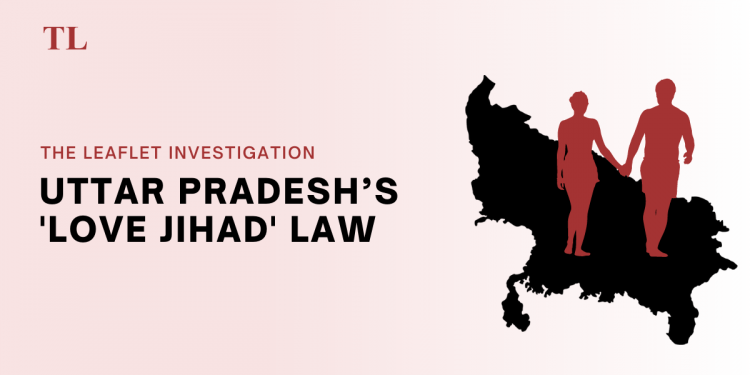 On November 28, 2020, the BJP-led Uttar Pradesh government passed the UP Prohibition of the Unlawful Conversion of Religion Ordinance with an aim to curb forced conversion. Dubbed the law against ‘love jihad’, the issue is one that has been raked up by various right-wing groups, as well as the UP Chief Minister Yogi Adityanath, on several occasions. With the law completing its first anniversary, and with more than 108 first information reports (FIRs) registered so far, THE LEAFLET investigates the impact of the law on the lives of accused individuals, interfaith couples and several others. This is the first in a multi-part series of reports from the field.

FOR Uvais Ahmad, a long-held dream of joining the Indian Army has come to a stand-still. The 22-year-old, a resident of the village Sharif Nagar in Uttar Pradesh’s (UP) northwestern Bareilly district, was the only one amongst 10 siblings to attend college. On November 28, 2020, barely 12 hours after the UP Prohibition of the Unlawful Conversion of Religion Ordinance, 2020 came into force, Ahmad became the first person to be booked under the law.

“The law came into force on November 28 midnight and by 11 a.m., I just received notice of an FIR against me”, Ahmad said.

The FIR was lodged at Deorania police station after the complaint of one Tikaram Rathore, living in the same neighbourhood as Ahmad in village Sharifnagar. As per the FIR, Rathore had complained that his then 20-year-old and already married daughter Asha, who went to school and college with Ahmad, was being ‘coerced, coaxed and allured’ into converting and marrying him.

Ahmad was booked under Sections 3 and 5 of the UP anti-conversion law. He spent 22 days under imprisonment in Bareilly’s district jail, before being released on bail on December 24, 2020.

Prior to this, in October 2019, Asha Rathore had run away from her home, and her father Tikaram had registered a complaint against Ahmad. The police, in their FIR, charged him with Sections 363 (Punishment for kidnapping) and 366 (Kidnapping, abducting or inducing woman to compel her marriage, etc.) of the Indian Penal Code (IPC). Back then, Ahmad was kept in police custody for ten days until Rathore gave her statement to the magistrate. In her statement recorded under Section 164 of the Code of Criminal Procedure, Asha admitted that she ran from home on her own accord, and Ahmad had nothing to do with it; following this, the case was dropped and the police filed a final report as well.

What remains a mystery to Ahmad and his family is why police booked him again in 2020 after the law was passed. “We were classmates in school and college. She even got married after this incident in March or April 2020. I don’t know why anyone would go after me again under this Love Jihad claim; is it just because I am a Muslim?”, a weary Ahmad said.

The majority of locals in the OBC (Other Backward Classes)-dominated village identify themselves as Hindus, with Muslims making up about 10 per cent of the residents. Although The Leaflet tried to reach out to the Rathore family, Tikaram Rathore and Asha Rathore remained unavailable for comment. Upon visiting their home in Sharifnagar, Asha’s elder brother Kamesh Rathore informed this reporter that “there is nothing to be said from our side” and added that his sister, who had moved out of the village since her marriage, “does not wish to speak to anyone on this issue”.

With a delayed trial, doubts raised over police role

A controversial legislation, UP’s anti-conversion law came into force after propaganda by right-wing groups and the state’s Chief Minister, Yogi Adityanath made public statements promising to curb the problem of so-called ‘love jihad’ (a theory propounded by Hindutva and right-wing groups that Muslim men lure non-Muslim women into marriage for the purpose of conversion). Rigid anti-conversion laws have been passed in 10 states so far.

Also Read: Anatomy of anti-conversion laws: Parts I and II

In over one year since the UP anti-conversion legislation came into effect, a total of 108 FIRs against 340 people have been lodged in the first nine months, as per multiple reports. Of these, 189 people were arrested and the charge-sheets filed in 72 cases. Meanwhile, Ahmad and his lawyer Mohammad Arif still await the charge sheet. Speaking to The Leaflet, Arif said, “The police are delaying the charge-sheet in court because they know that if they do send it then the trial will begin, and it will expose the reality of this case.”

Ramesh Kumar, a lawyer practising in the Allahabad High Court, who challenged the unlawful conversion ordinance and secured bail in a handful of cases under the new law (including the widely reported Bijnor minor’s case), noted that not a single conviction has been made under the law till date. “Last week, some media reports claimed that a man called Javed from Kanpur is the first to be convicted under this so-called Love Jihad law, but it turned out to be fake news. He was never even charged under the anti-conversion law; his case dated to 2017, much before this law was passed”, Kumar said. He further added, “Look at all the arrests made so far, and the matters charge-sheeted. Can you find a single conviction?”

Ahmad’s counsel agrees. “Why is the police dallying over the charge-sheet? It’s been over a year, and the trial hasn’t begun. This case is 100 per cent fabricated. If the matter ever reaches trial, Uvais would be completely exonerated and it would only indict the police.” Arif also pointed out that at the time Ahmad was named in the forced conversion FIR, police detained his 70-year-old father and his sisters in Deorania police station, purportedly threatening them to ensure Ahmad surrenders.

“Uvais surrendered in the adjacent Baheri police station; he was too scared to surrender in Deorania. But see, the place of arrest is shown as Deorania. Not just that, but police did not even record the woman’s 164 CrPC statement in this case. They just re-used her statements from the 2019 case, which was a totally different case – much before this law was passed”, Arif said.

The Leaflet tried to reach out to the Baheri region Deputy Superintendent of Police (DSP) Ajay Kumar. However, there was no response. (This story shall be updated if and when the police respond).

Meanwhile, for Ahmad, worries about his future remain. Having dropped out from his B.Sc Biology program after the arrest, today, Ahmad travels to Jhansi and does daily-wage/casual jobs, such as scrap-dealing and tailoring to support his family. Despite this, he continues to aspire towards joining the army. “I may have gotten bail but who will take me in the army until I’m not cleared of all these charges? Already one year has gone now without trial, I have only two more attempts left”, he said.