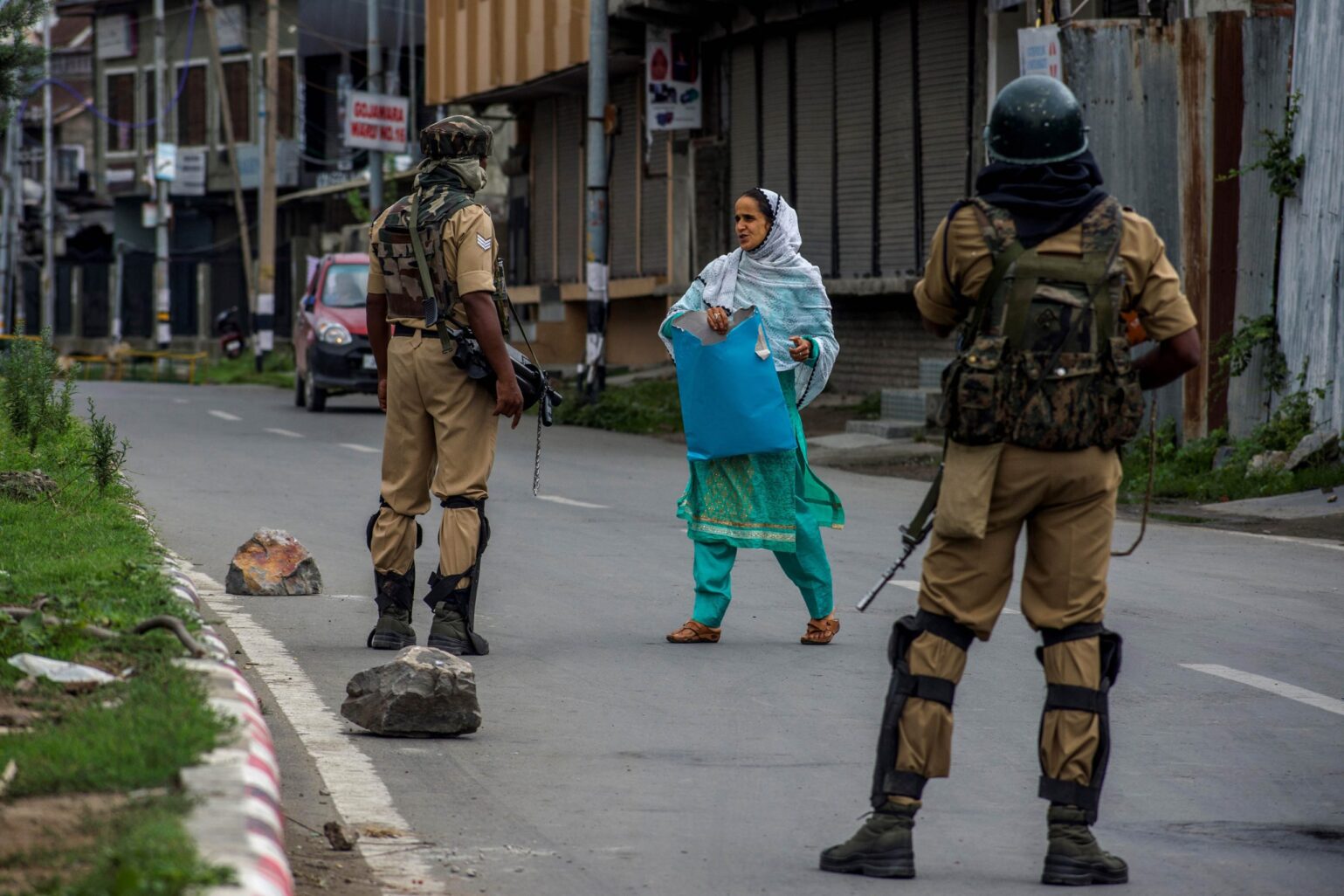 The revocation of Article 370 was hailed as the dawn of a new era that would usher in development and give more autonomy to people of Ladakh. The state has lived through lockdown after lockdowns.  On the completion of one year of revocation, the author examines the political and economic situation in Kashmir.

On August 5, 2019, the central government annulled Jammu and Kashmir’s special status — which granted exclusive land and job rights to permanent residents of the former state. One year later, contrary to the commanding national narrative, Kashmir today has a ruined economy whereas mainstream politics, which was centered on ‘Kashmiri identity’, has been rendered irrelevant.

While the unemployment rate has reached an all-time high, there is a growing sense of alienation and frustration on the ground. Major rights groups have made scathing observations on the government’s assault on the Kashmiri press, which remains numb for the last one year.

Notwithstanding the gloom and uncertainty in the region, the ruling party in J&K has decided to go ahead with a series of functions to celebrate first anniversary of Article 370 abrogation.

Sharply reacting to the Jammu and Kashmir administration’s report card that has listed three dozen achievements since August 5 last year, Mohammed Yousuf Tarigami, Srinagar based leader of the Communist Party of India (Marxist), described the official claims as “whites lies.”

“Not a single job was created. In fact, thousands and thousands of people associated with tourism, handicrafts, horticulture, sand mining, and casual labour are virtually in deep crisis,” he remarked, adding that “August 5 was a monumental blunder and a year has been wasted in Kashmir,” he said.

A recent report titled, “Jammu and Kashmir: The Impact of Lockdowns on Human Rights”, by the members of the Forum for Human Rights in Jammu and Kashmir that included former Supreme Court, Justice Madan B Lokur and the former member of a group of interlocutors for the erstwhile state, Radha Kumar, also pointed out: “All the former state’s industries suffered severe blows, pushing the majority into loan defaults or even closure; hundreds of thousands lost their jobs or underwent salary deferment or cuts; closures of schools and universities gravely impaired education and added to the trauma of children and parents; healthcare was severely restricted by curfew and roadblocks; the local and regional media lost what little independence they had.”

J&K BJP general secretary Ashok Kaul recently told reporters in Jammu that abrogation of Article 370 and 35 A helped in retaining peace in the valley but at the same time, developmental programs got hampered due to the COVID-19 pandemic crisis.  “The post-COVID-19 situation in Kashmir would be very different when compared with the rest of the country. We have jumped from one lockdown to the other lockdown. For the last over one year, there has been absolutely no business activity across the ten districts of Kashmir. There are only expenditures, there is no income,” Sheikh Ashiq, president Kashmir Chamber of Commerce and Industries said.

“We have suffered a loss of 40,000 crore loss since August 5 last year. It’s only essential commodities that people are selling and buying. There is no tourism activity. The handicraft sector’s income has declined by over 80 percent. In the horticulture sector, people resorted to distress sale in this lockdown and the previous lockdown,” he said.

“When there is already an employment crisis and joblessness, the influx of more people in the Union Territory through new domicile laws will only increase the burden of unemployment. I am associated with the chamber for the last 10 years and this is the worst time that I am witnessing at present. Thousands of young entrepreneurs are in a deep mess today,” he added.

While the Supreme Court of India is yet to decide on petitions challenging the abrogation of Jammu and Kashmir’s semi-autonomous status and its bifurcation into two centrally-administered union territories, the local administration on June 27 started distributing domicile certificates.  The beneficiaries included non-locals, including a senior bureaucrat of Indian Administrative Services, as well as Hindu war refugees from Pakistan and members of a few other marginal communities residing in Jammu.

“If we see Kashmir as a pristine Himalayan stream, an average Kashmiri fears that it will soon get engulfed by an ocean (of non-locals),” Haroon Reshi, a journalist based in Srinagar, said. “Our distinct social and cultural identity, whether it’s our languages or traditions – everything is in danger,” he added.

Amid a surge in militancy-related violence since August last year, the separatist organisations have advised locals against selling land and property to non-locals.

Shadi Lal Pandita, president of Soan Kashmir Front, which works for the rights of displaced Kashmiri Pandits in Jammu, said, “The way Modi government abrogated the special status of Jammu and Kashmir, it further increased the gulf of distrust between Kashmiri Pandits and Kashmiri Muslims. We can’t go back to our abandoned homes and land and live along with the local Muslims. Now the government must set up separate satellite townships for the Pandit migrants in Kashmir so that we, too, can return with a sense of security.”

Showkat Ahmad Anim, managing director of Arco InfraCon, a commercial construction company based in Srinagar, said his company has not received a single query from non-locals since the revocation of Jammu and Kashmir’s special status. “No one wants to own land or property here due to the turmoil. Everyone would prefer to go to America, Dubai or Sharjah,” he said.

Even with the real estate sector at a standstill, the Jammu and Kashmir State Industrial Development Corporation has been creating a bank of state-owned land to sell to outside investors, according to officials who requested anonymity because they were not authorised to talk to the press.

In another move, the administration on July 24 approved setting aside 1,205 acres of state land to build industrial estates in about 35 locations across the region.

Of late, J&K administration approved an amendment to the Control of Building Operations Act, 1988 and the J&K Development Act, 1970 to allow notifying any area as “strategic area” which can be taken over and developed for the use of armed forces and their families.

“Our Kashmir is a garden. The new administrative laws have thrown the doors open for plunderers to ruin it,” said Zareef Ahmad Zareef (75), who has been witness to several important events that shaped Kashmir after it became a part of India.

“We have started witnessing the results since the abrogation of Jammu and Kashmir’s special status. Even businesses like sandmining have been handed over to the non-local businessmen, mostly from Gujarat. The price of sand used for construction purpose in Kashmir has almost doubled in the past few months,” the poet and historian said, referring to the local media reports that non-local mining companies won 95 percent of the recent online bids invited by the Geology and Mining Department for extraction of minerals from water bodies. The locals have accused authorities of “twisting clauses” in favour of the non-locals.

“The days are not far when we will be left with no job opportunities or economic resources, including land and forests,” he added

The anxieties of losing jobs, land, and business are common across the landscape, transcending all geographical, religious, and regional divides in the region, according to executive editor of Kashmir Times, Anuradha Bhasin.

“While Ladakh union territory will have no legislature, the limited nature of J&K union territory assembly, whenever that assumes shape, is likely to reduce political discourse to the level of municipal matters,” she said, adding, “The project of demographic change, inspired by BJP’s pathological hatred for Muslims and its abject intolerance to the existence of a Muslim majority region in the country, may also be a threat in Kashmir and for Muslims elsewhere, though not across the board,” she said.

“New Delhi has also set into motion the process of delimitation for redefining the electoral constituencies, engendering fears in Kashmir of also losing their political domination. In such a situation, distress, divisiveness, and chaos are the fruits that the country could potentially harvest,” she stressed.

Deshbandhu Dogra Nutan, a novelist and playwright from Jammu, said, “Jammu and Kashmir was the first state among those few states where land reforms were introduced and the land was transferred to actual tillers, big landholdings were abolished and that land was distributed to the landless residents.”

“Unlike other parts of India, we don’t hear about farmers committing suicide or the landless poor dying of hunger here. But, I fear things will gradually change here once the financially struggling poor residents begin to sell land to the rich non-locals,” he added.

While the administration is yet to announce new domicile laws for the union territory of Ladakh, its residents – including a local parliamentarian from the ruling Bharatiya Janata Party – have raised concerns over the perceived threat to their land, jobs, cultural identity and fragile ecology.  They have demanded that Ladakh be declared a tribal area, which would provide autonomy to tribal communities through autonomous district councils.

“The tragedy of the Kashmiri people is that they can’t even protest against new administrative laws. The Indian State considers them as enemies,” said an academic associated with the Institute of Kashmir Studies, University of Kashmir, who requested anonymity. “There is a graveyard silence in Kashmir,” he said.

(The author is a freelance journalist based in Delhi. Views expressed are personal.)