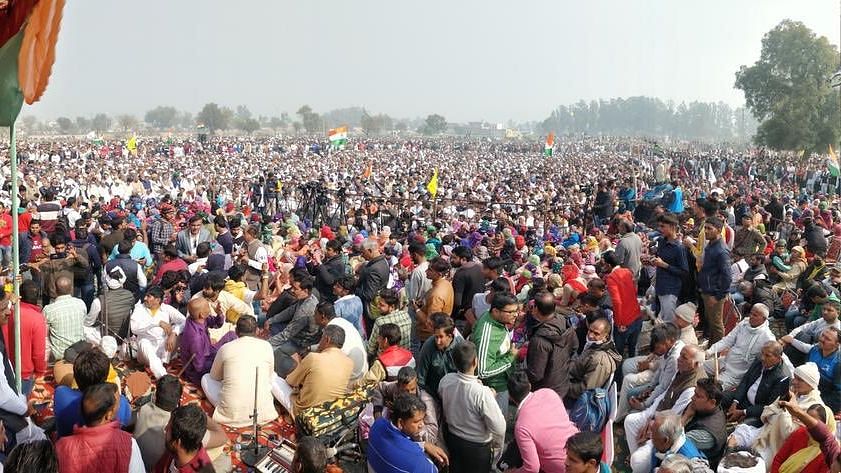 By anchoring its agitation around kheti, kisani, and bhaichara, the Muzaffarnagar Kisan Mahapanchayat has been a beacon of religious unity and principled protest, emulating not only Ambedkar’s call to action to educate, organize, and agitate, but also Gandhi’s legacy of religious pluralism. S.N. SAHU writes about the need to maintain momentum and reclaim constitutional morality in the face of divisive politics.

THE issues raised at the Muzaffarnagar Kisan Mahapanchayat, organised on September 5, 2021 as part of the ongoing agitation of farmers against three farm laws passed in September 2020, are central to the fight to sustain the core values of the Constitution of India. Academic Satendra Kumar recently wrote about the panchayat in The Hindu stating that it “… has shown the way to reclaim the Indian Constitution and the legacy of secularism by simultaneously linking socio-economic injustices to environmental and gender issues.”

The most striking aspect of the Mahapanchayat has been the massive and willing participation of several lakh people from across many states in India. Despite significant backlash from the State, the Supreme Court has categorically observed that the farmers have a constitutionally guaranteed right to continue with their “absolutely perfect” protest as long as it does not cause violence and inconvenience to others, or damage public property.

Professors Amartya Sen and Jean Drèze, in their book, ‘An Uncertain Glory: India and its Contradictions,’ have invoked Dr. B R Ambedkar’s visionary slogan, “Educate, Organise and Agitate” several times, insightfully arguing that “… as Ambedkar also argued, organisation and agitation have to be based on good and informed reasoning. The first item in his call, ‘educate’, is important here… We are much inspired by Ambedkar’s vision of informed and reasoned public engagement.”

Such a deep understanding of agitation as a method of upholding democracy as envisioned in the Constitution stands in sharp contrast to Prime Minister Narendra Modi’s disparaging statements in the Rajya Sabha earlier this year.

While responding to the Motion of Thanks to the President’s address, he insinuated that some people resort to agitation to earn a living, and referred to them as aandolanjeevis (those who thrive on protests). His statements evidently alluded to agitating farmers who were demanding the repeal of the three farm laws passed in the Rajya Sabha by voice vote in September last year. The vote was conducted while ignoring demands by some members that an actual vote take place, as mandated by Article 100 of the Constitution and the Rules of Procedure and Conduct of Business in the Council of States.

In fact, leaders of the Muzaffarnagar Kisan Mahapanchayat set a refreshing example of ’informed and reasoned public engagement’ and stood out as living embodiments of principled protest. Their public engagements manifested in their speeches, with leaders articulating the need for the nation to reclaim the Constitution, constitutional values and above all, the constitutional morality that has governed legislative and collective action since independence.

When Rakesh Tikait, leader of the farmer’s representative organization Bharatiya Kisan Union, recited Allahu Akbar (“God is most great”) at the Mahapanchayat, other leaders and participants responded by chanting Har Har Mahadev (“’Everyone is Lord Shiva’”); Sikhs present there, meanwhile, invoked Wahe Guru (“the true Guru/One God” in the Guru Granth Sahib).

Such practices are not new; these chants were common at Kisan Panchayats organised in western Uttar Pradesh prior to 2013. After the communal riots in Muzaffarnagar, the social bonds between farmers that transcended religious barriers were broken, leading to a divergence from the practice of reciting religious slogans at Kisan Panchayats.

The farmers’ agitation against the farm laws has now led to the realization of a common cause beyond religious identities. The protests have witnessed the renewal of bhaichara (brotherhood) and secularism, both forming the bedrock of the lives of farmers.

Such reclamation of secular ethos reaffirms Article 51A of the Constitution, which lays down the Fundamental Duty of citizens to cherish and follow the noble ideals which inspired the freedom struggle, to promote harmony and the spirit of common brotherhood, and to value and preserve the rich heritage of our composite culture.

It is significant to bring attention to the role that the leaders of the Mahapanchayat have played in  passionately demonstrating and advocating secularism, a value integral to the basic structure of the Constitution, as held by the Supreme Court in S.R. Bommai v Union of India (1994). In the judgment, the apex court cited former President of India, the late Dr S. Radhakrishnan’s book, ‘Recovery of Faith’, stating, “… the religious impartiality of the Indian State is not to be confused with secularism or atheism. Secularism as defined here is in accordance with the enormous religious traditions of India. It is for living in harmony with each other. This fellowship is based on the principle of diversity in unity which alone has all qualities of creativeness.”

It is relevant to note that the response of Har Har Mahadev at the Mahapanchayat was not done in opposition to the chants of Allahu Akbar, as is done by some people driven by sectarianism and bigotry. The kisans (farmers) recited these slogans to demonstrate their unity in religious pluralism.

Almost a hundred years after Gandhi prescribed the three national cries, we find that the kisans are recapturing that vision by reciting multiple slogans representing several religions.

In doing so they are salvaging the communal harmony and secular ethos which, according to the leaders of the Mahapanchayat, fell victim to divisive politics in 2013.

Tikait and other leaders confessed that they had succumbed to divisive politics in the past, and resolved to defeat hatred and violence. Tikait said, “They talk of dividing, we speak of uniting. The hallmark of BJP [Bharatiya Janta Party] politics is hate politics.”

Apart from preaching plurality of religious slogans, Tikait and other leaders of the Bharat Kisan Union have been involved in practical action meant to unite people.They have travelled to several villages, mobilised both Hindu and Muslim farmers, and convinced them to overcome the rift caused by the riots. The meetings they organised in the streets in an effort to convince others to join their cause embody Dr. Ambedkar’s call to “Educate, Agitate and Organise”.

The unity of the farmers’ protests also mirrors  the eighteen points outlined by Gandhi in his Constructive Programme, wherein he argued that communal unity does not mean political unity, but an unbreakable unity of the heart.

It has become clear over the last many months that the agitation of the farmers against the three farm laws, and their retrieval of our Constitution’s secular legacy, are lessons that others can use in their journey to  reclaim  the Constitution and its accomanying constitutional morality, both of which have been under assault since 2014. It is importatnt that this momentum be sustained in order to ensure the eventual defeat of divisive politics.

As Ambedkar said in his last speech in the Constituent Assembly on November 25, 1949, if we wish to maintain democracy in fact, and not merely in form, we must “hold fast to constitutional methods of achieving our social and economic objectives”

It is important, now more than ever, that we hold tight the constitutional values that have defined us as a nation for decades.