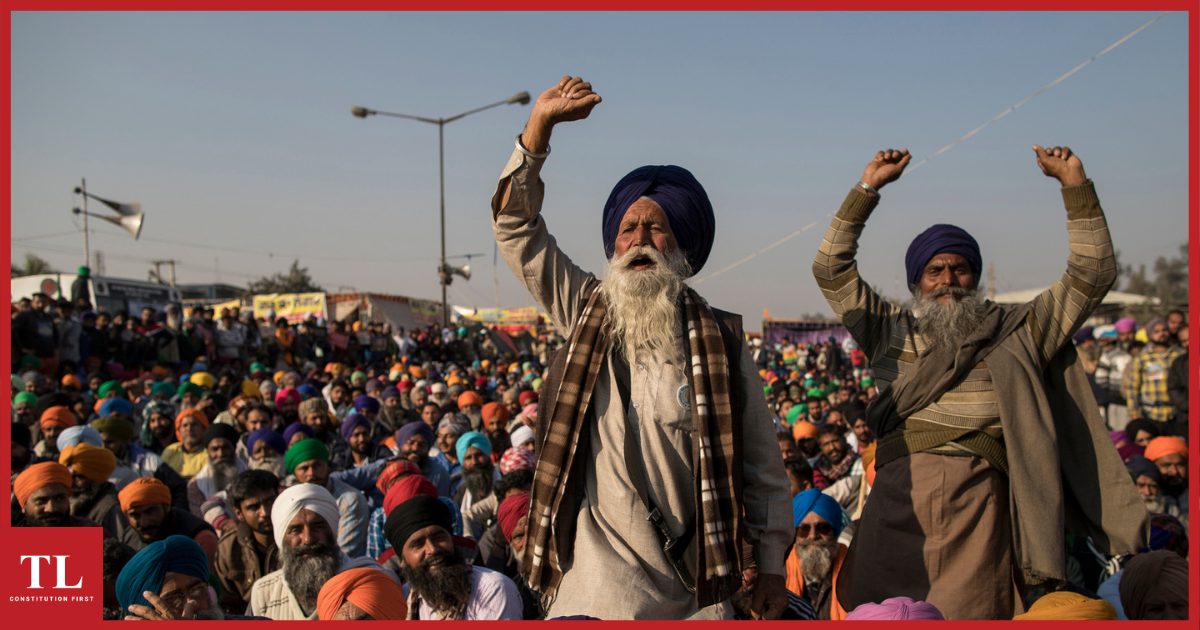 As the BJP-RSS combine mounts a vicious vilification campaign against the national farmers’ movement in order to discredit and dismiss it, ARUN SRIVASTAVA writes about the ruling party’s vested interests for doing so.

WITH the RSS and BJP making all-out efforts to convince the nation that the farmers’ movement for the abrogation of the three farm laws is against the national interest and systematically fading out,  leaders of the farmers are planning to reignite their agitation from April.

Since several farm leaders have embarked on a tour of states conducting legislative assembly elections this year to organise the farmers to vote against the BJP, the RSS-BJP combine has attempted to spin the absence of the farm leaders from agitation sites to portray how the movement is losing steam. It is using this to persuade farmers, especially those in remote rural areas, that their leaders are no more willing to prolong the agitation.

The saffron leaders argue that with the Union government outright refusing to concede to their demand of scrapping the laws, they are left with no other choice but to surrender their movement.

However, the government has cause to worry about the impending future. It will, sooner or later, realise that the farmers’ agitation threatens to erode its political base, as well as tweak the political plank of Hindutva.

The onerous pitting of Hindus against the Muslims that the RSS and BJP have undertaken in the past few years by flying the false flag of Hindus being threatened by Islam has been gradually but noticeably weakening in the wake of the farmers’ movement.

The best illustration of this is the emergence of new communal bonhomie in several areas of Uttar Pradesh, particularly in Muzaffarnagar. The RSS had used this region in 2013 as the laboratory to experiment with its communal and hate politics to unleash a reign of terror against the Muslims. Now this same region has been witnessing both the Hindu and Muslim communities joining hands to spearhead the farmers’ agitation and push the government to accede to the farmers’ demands.

But far more important has been the intervention of farmers in the politics of the country. There is a general perception that farmers do not have a significant stake in politics or governance, nor are they concerned with how their elected representatives act or behave.

This perceived aversion of theirs has been thought to be primarily responsible for their neglect by successive governments.

Only the richest of farmers have participated in and won elections in our recent political history, and have then gone on to advocate for the interests and economic gains of prosperous farmers in legislative assemblies and governments.

For perhaps the first time in the history of Independent India, a farmers’ movement has been speaking to all sections of farmers, including poor peasants and agricultural labourers.

No one in the Union Government could not have imagined that nearly all of the disparate farmers’ organisations will speak in one tone.

This was perhaps why the government chose to not consult them while framing the three laws: they assumed that the disunity among the various sections of farmers would mean that any agitation would quickly die down. But much to its discomfiture, the farmers strategically changed track and took to actively participating in the electoral political theatre.

It is not yet clear what the respective outcomes of the elections to be held in five states this year will be, but the farmers’ campaign against it has certainly put the BJP on the defensive.

The farmers’ movement has succeeded in making at least some of the rural voters link the elections with the future of their livelihoods.

Vilification campaign against the movement

The farmers’ sustained protests is one of the biggest setbacks that the government has faced since then, which is why it initially tried to maintain restraint. However, it cannot wait for long.

The Union Government will strive to push the implementation of the impugned statutes. The interests of the corporate sector, the crony capitalists, and the right-wing forces are of such high priority that it has to weaken the farmers’ movement.

Its vilification campaign against the movement, and pushing disinformation that farmers were deserting the dharna places and more farmers were unwilling to join the agitation, are part of this design.

In January this year, PM Modi cautioned that the democratic process cannot be allowed to be subverted through unlawful protests. While this was in reference to the storming of the US Capitol by then-US President Donald Trump’s supporters, it was also targeted at the farmers’ demand to carry out a peaceful tractor march in Delhi on India’s Republic Day if their demands were not met by then. The statement, slyly, sought to delegitimize the farmers’ protest.

In order to subvert the farmers’ movement, the Union Government has even been ruthlessly using parliamentary panels. The Standing Committee on Food, Consumer Affairs and Public Distribution had, through a report, recommended that the government “implement the Essential Commodities (Amendment) Act, 2020, in letter and spirit, and without… hindrances so that the farmers and other stakeholders of the farming sector in this country receive the benefits intended under the said Act”. A day later, the Indian National Congress and the All India Trinamool Congress, which had the chairmanship of the committee, claimed that the report was a misrepresentation and evidence of the BJP’s “dirty tricks department in action”.

Questioning the nature of agricultural reforms

Some liberal economists and experts have argued that Indian agriculture desperately needs reforms. But no one can deny that making that argument at this point only helps the government’s vilification campaign and strengthens the anti-farmers’ forces.

Some of these people even argue that the Green Revolution was a step towards reforms, and was driven by investment in irrigation and market infrastructure as well. However, if that were the case, then why did this flow not acquire an institutional character in later years, and why do farmers today still have to fight for minimum support price?

Any meaningful agricultural reforms must include land reforms, and not merely focus on increasing the productivity of grains. Indian agriculture crises are rooted in capitalism, and the arguments for reforms owe their existence to it.

It is to the credit of the farmers’ movement that it has, for the first time, questioned the relevance of such a reform model. (IPA Service)