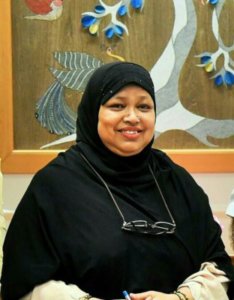 Shaista Amber: “We had 250 applications where triple talaq had been pronounced by text message, emails and sometimes drunk!”

Shaista Amber, President of All India Muslim Women’s Personal Law Board speaks to Ankita Ramgopal about the journey of the AIMWLB and the experiences of the  women involved.[/caption]

When did you start working with the movement for women’s rights?

I started working for women’s rights since 1997, I have always tried to create awareness and raise my voice against the malpractices in society and directed efforts to do away with them.

It had been mentioned in the Quran that you are supposed to dedicate your life to fighting evil, and upholding what is right. This is why I have fought in multiple social reform movements, protecting the interest of women, ensuring greater participation of women in Government jobs, panchayats etc.

Once a journalist asked me about my involvement with issues within my own community of Muslim women, while I was a social worker for women’s rights. My upbringing was rather secular, and did not involve religion being imbibed in any major way. Therefore, until this point it did not matter to me that I was a Muslim, and it didn’t occur that our community could be facing differing issues. That is when I introspected over my position in light of being a Muslim woman. I began studying the Quran and understanding the true meaning.

The Quran is not just a holy book, it provides a way of life from birth to death, directions on how to lead daily life, including how to treat a wife, give rights to a wife, the concept of nikaah and how it is a contract and both have equal negotiating power. I believe that in society it has been misinterpreted heavily. The practices of nikahhalala, dowry, polygamy etc which are considered prevalent among our community, most of these are against the tenants of Islam.

I spoke to the Maulana about becoming a member of the Personal Law Board to help tackle these issues within the community. While some people found my membership favourable, others thought I’d stir up too much trouble. I was finally refused membership. After that, I along with some other women in the community working on social reforms, decided to form an All India Muslim Women Personal Law Board. Within the ambit of personal laws, there have been few reform movements for women, and therefore this decision was appreciated by many.

Can you describe how you got involved with the movement against triple talaq?

It was first in 2005, that we first promulgated the movement against triple talaq, through the All India Muslim Women Personal Law Board. We took up the fight against triple talaq, polygamy, halala, meher all those practises which are foreign concepts and not provided for in the Quran. Our movement started out small, with us setting aside one day of the month to gather as a collective and have discussions on these issues. People started retaliating and protesting – my vehicle was stoned, its tyres punctured.I was belittled for trying to assuming a position equal to a maulana.

Gradually our organisation grew, although I had no resources to begin with, people slowly started approaching me for solutions or to ask about my opinions on their problems on certain issues.

In 2008, we drafted a model nikah-namawhere the photo of the bride and the bride-groom was incorporated and registered. Previously a vague invalid form of nikaahnama was commonly being used. We laid down guidelines that the nikah was a contract where the two were made to understand that they each had rights in the marriage and duties they owed to each other. They need to understand that nikaah is a responsibility. You cannot casually marry someone and then divorce them with the talaq arbitrarily.

What were the experiences of women who have been divorced by the triple talaq which made you take up the issue in court?

When I approached the Supreme Court in 2016 as a petitioner, we had close to 250 applications where talaq has been pronounced by text message, email, sometimes drunk, in sleep, in anger, during argument. We collated these applications as evidence.

What was your opinion before the verdict? Did you believe a favourable judgment would be passed?

Although I had complete faith in the system, I was a little anxious. However, in the heat of the last day, the advocates for the petitioners [the Personal Law Board] were allowed a longer hearing than that afforded to the defendants.  It was almost as if they were being pacified by the Court. It was unanimously accepted that the practice was discriminatory towards women. Therefore, we believed that the Supreme Court would be sensitive to the plight of the women and pass a favourable judgment.

When it was reported that the All India Muslim Personal Law Board met with the Prime Minister, and it was discussed that the matter is one that warrants resolution within the community, I was devastated because of the state of politics in our Country. I was repulsed by the vote-bank politics where politicians claim votes from different communities by promising favours, a society where innocent women would continue to suffer because of triple talaq. We were concerned that the Court would come under political pressure. Concerned about the outcome, I sought an appointment with the Prime Minister. We were assigned the appointment on 8th August. There it was clarified to me that the Supreme Court operated independently and the Government functioned distinctly.

Honestly, it is irrelevant to us, which political party is at the helm of the Government, because until none of them has raised their voice to protect the rights of Muslim women. To the Maulanas who were criticising us I would like to say, if it was the prerogative of your political agenda, to improve the status of women in society and five her equal rights, we would not be forced to approach the Government or the Supreme Court for justice.You are neither tolerating our attempts at procuring justice, nor allowing us to pursue our efforts.

We acknowledge that the verdict of the Supreme Court is in consonance with the tenets of Muslim Law and the Quran. And anyone who violates it must be subject to the process.

Are you satisfied with the judgement?

Of course! I am 100% satisfied. The verdict of the Supreme Court is in complete consonance with the tenets of Muslim Law and the Quran and the Constitution. We challenge people to truly comprehend the Quran and its principles. The Quran is meant not only for Muslims, but for all people as a guide to living life.

What is the way forward, after the judgment?

The Government must act now with honesty. They must codify a marriage law for the Muslims, as has been done for the Hindus. We made a similar proposal even to Prathiba Patil when she was President. We’d like for a Muslim Marriage Act to be formulated, similar to the Hindu Marriage Act.

Ankita Ramgopal is Research and Advocacy Officer with Lawyers Collective.