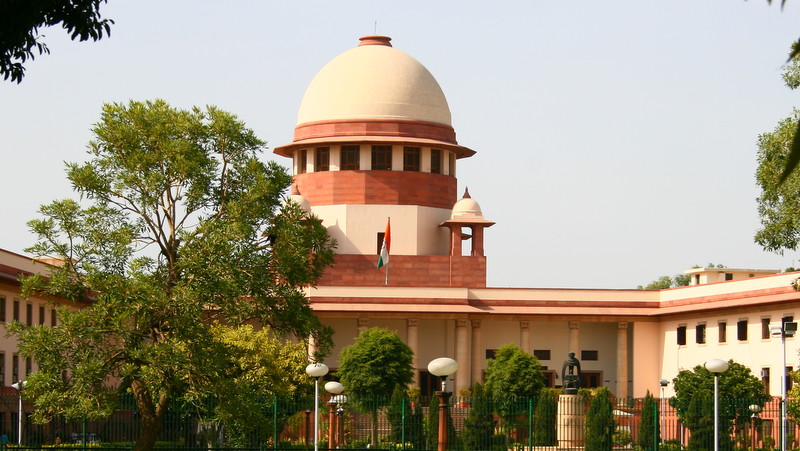 New Delhi, Nov 13 (PTI) Terming the officers as “very arrogant”, the Supreme Court dismissed an appeal of the Uttar Pradesh Government on Saturday and paved the way for the arrest of the State Finance Secretary and the Additional Chief Secretary (Revenue) against whom the Allahabad High Court issued bailable warrants for delayed and partial compliance of orders.
The matter is related to the regularisation of service and payment of arrears to a ‘collection amin’ at Allahabad.
The High Court, on November 1, observed that the officials have been treating the court as a “playground” and have refused to grant arrears of salary to a person who was earlier denied the rightful claim of regularisation of service.
“As the respondents (officers) have deliberately mislead the (High) Court and flouted the undertaking given by the Additional Advocate General in not granting arrears of salary to the petitioner, this Court records it distress and anguish about the reprehensible conduct of the respondents, and accordingly, believes that it a fit case to issue bailable warrant against Additional Chief Secretary (Revenue) and Sanjay Kumar, the then District Magistrate currently posted as Secretary (Finance), Government of U.P., Lucknow to appear before this Court on November 15. Let bailable warrant be issued against…,” the High Court had ordered.
The State Government, which rushed to the top Court, to save the top officials from getting arrested could not get the relief as a bench headed by CJI N V Ramana said, “You deserve all this. More than that.”
“What are you arguing here in this matter. The High Court should have ordered arrest by now…we think more severe punishment was needed to be awarded. The high court has been gentle with you. Look at your conduct, you are depriving an employee of his arrears. You did nothing to abide by the orders. The High Court has been very kind to you …you have no respect for the court. This Additional Chief Secretary appears to be very arrogant,” observed the Bench which also comprised Justices Surya Kant and Hima Kohli.
Additional Solicitor General Aishwarya Bhati, appearing for the officials, said that the service of the petitioner, Bhuneshwar Prasad Tiwari, as ‘collection amin’ has been regularised and the juniors, who were given regular employment ahead of him, have been removed and the only issue remained was that of payment of arrears of the salary.
“Your Lordships may not take this view,” the law officer urged the court saying a lenient view be taken in the case.
“These all are matters of record and we are not saying anything which is not part of the records. Look at this, despite the court order, this additional chief secretary says that I will not grant the age relaxation,” a visibly-irked CJI observed.
The officials resisted compliance in every possible way and they deserve what they get and more, the Bench said.
“You tell all this (argument) to the high court after you are arrested and produced. Dismissed,” the Bench said.
The case pertains to the denial of seniority benefit and consequential regularisation of service by State Government officials to Tiwari as ‘collection amin’ in 2017.
Several interim orders were passed by the High Courts to ensure that the fourth grade employee gets justice in the form of regularisation of service and past arrears of salary.
Sanjay Kumar, currently posted as the Secretary (Finance), allegedly did not do the needful despite repeated court orders, the High Court had noted.
“It appears that state officers of the rank of Additional Chief Secretary (Revenue) have treated the court as playground which is evident from the fact that despite the undertaking given by Additional Advocate General, the respondent has refused to grant arrears of salary to the petitioner to which he is entitled too, particularly in view of the fact that it is admitted on record that the petitioner has wrongly been denied regularisation due to fault and inaction on the part of the then District Magistrate, Sanjay Kumar,” the High Court had said.
According to the High Court, Kumar had “denied the claim of the petitioner very casually on the ground that since the process of regularisation had been completed, therefore, the claim of the petitioner shall be considered whenever next process is undertaken“.
Acknowledging the fact that injustice has been done to Tiwari by not regularising him, the Additional Chief Secretary (Revenue) despite passing the order of November 25 reviewed its order and granted relaxation in age, and thereafter, the benefit of regularisation was extended to him, yet the officials have refused to grant him arrears of salary despite the fact that the employee was denied regularisation illegally, it said.
“This court is astonished and pained with the awful conduct of the respondents in getting the case adjourned by giving undertaking before this court through the Additional Advocate General and yet they flouted the undertaking at will by denying the petitioner arrears of the salary,” the High Court had said while issuing the bailable warrant against the officials.
“Put up this case on November 15, 2021, on which date the District Magistrate, Prayagraj shall remain present and let a copy of this order be sent to the Chief Judicial Magistrate concerned for compliance,” it had ordered.