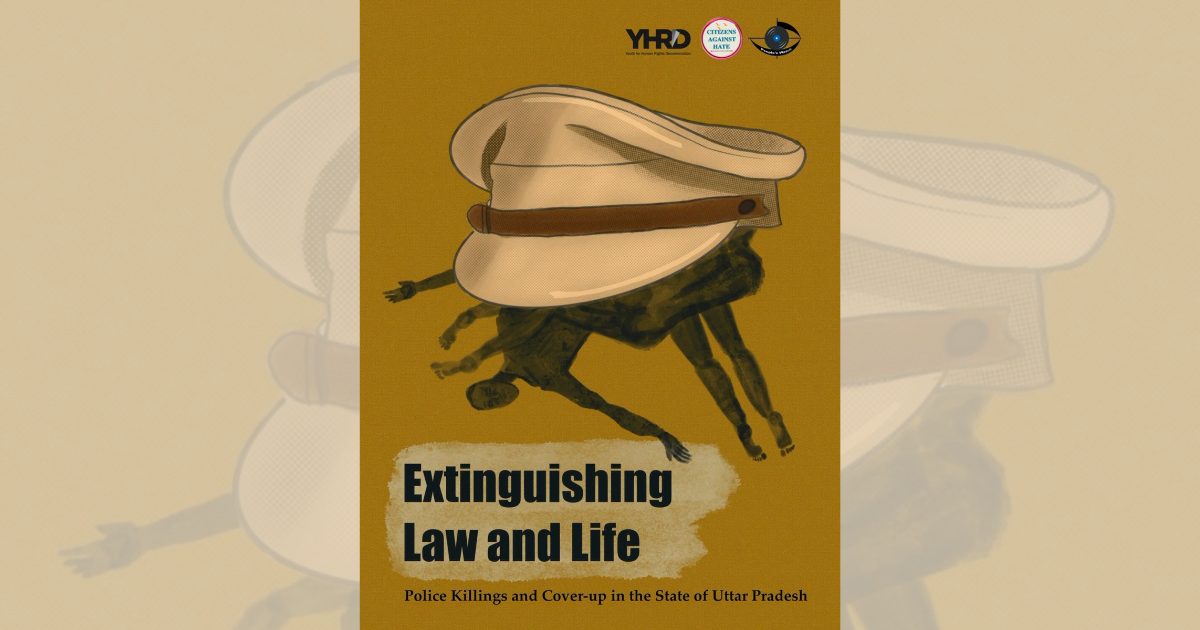 Normalising extrajudicial killings in UP: How absence of FIRs against the police resulted in destruction of evidence

This is the first article in a three-part series by V.VENKATESAN on the nature of extrajudicial killings in Uttar Pradesh. The series is based on the report, “Extinguishing Law and Life: Police Killings and Cover-up in the State of Uttar Pradesh” brought out by three human rights groups on October 29. The report throws light on how the state and the National Human Rights Commission (NHRC) exploited the ambiguities in the law to cover up fake encounters and shield the accused.

EXTRAJUDICIAL killings or fake encounters have in recent days gained a veneer of respectability through the expression “instant justice”. In most cases, as former Supreme Court Judge Justice Madan B. Lokur observes in his Foreword to this report under review, it is nothing but cold-blooded murder.

By meticulously investigating and documenting 17 instances of such killings by the police in Uttar Pradesh since 2018, the report lays bare how the state circumvents the safeguards laid down by the Supreme Court and the National Human Rights Commission (NHRC). The report also exposes the complicity of the NHRC in turning a blind-eye to the cover-up.

The three rights groups, which have authored the report, deserve our praise for bringing out the facts, in pursuit of truth, and for identifying the ambiguities in law which promote impunity.

Rights groups that prepared the report

Among the three groups, Youth for Human Rights Documentation (YHRD) is a platform consisting of individuals and groups committed to the cause of human rights and social justice. YHRD was consolidated as an autonomous group in February 2020, soon after the episode of communal violence in North East Delhi. It consists of young lawyers, researchers, human rights defenders, and public-spirited citizens who believe in using the tools of research, documentation, advocacy, intervention and education to empower disadvantaged and vulnerable groups.

Citizens Against Hate (CAH) is a Delhi-based collective of individuals and groups committed to a democratic, secular and caring India. CAH was formed in 2017, in response to the rising trend of hate mobilisation and crimes, specifically the surge in cases of lynching and vigilante violence, to document violations, provide victim support and engage with institutions for improved justice and policy reforms.

The report is authored by Mangla Verma, Vipul Kumar and Ratna Appnender, assisted by Abhilasha and Mahvish Shahab.

The report documents the increase in “encounter” killings in UP. It attempts to deconstruct the extraordinary normalisation of “encounter deaths” in the state and the adoption of extrajudicial executions by the police as a mechanism for crime control.

All these killings took place in the districts of Saharanpur, Shamli, Muzaffarnagar, Meerut, Aligarh and Gautam Budh Nagar between March 2017 and March 2018. The family members of the 18 deceased victims in these incidents claimed that these deaths were extrajudicial killings by the police.

Of these 17 cases, the NHRC closed 12 after finding “no foul play” on the part of the police, and one case was transferred to the UP State Human Rights Commission. In only one case, the NHRC held that the deceased was killed in a “fake encounter” by the police, that is, in an extrajudicial manner.

In this case, the NHRC ordered further investigation by an independent agency and directed compensation to be paid to the affected family. While more than three years have passed since the NHRC took up these cases, two cases are still pending, and the status of one case is not available in the public domain.

The truth behind “police encounters”

Civil society groups have long argued that “police encounters” are not “spontaneous shootouts” as claimed by the police. Rather, they are a result of planned and premeditated killings, carried out by the police, where the police stage a scene of a shootout between the alleged criminal and them. The police may be motivated by larger ends – either to win public favour, or in furtherance of police officers’ own political or criminal connections.

As the report unravels, the state uses the euphemism “police encounters” to validate policing methods and deflect from legal accountability. It allows the police and security forces to disregard the rule of law and commit grave human rights violations, and instead promotes vigilante justice by celebrating the actions of police officials in eliminating alleged criminals without accountability.

Since March 2017, when the Bharatiya Janta Party came to power in the state, the number of police killings has increased at an alarming rate. The report claims that as per some estimates, since March 2017, UP police have shot at and injured at least 3,302 alleged criminals, with bullet wounds on their legs, in around 8,472 instances of police firing. Citing latest figures, the report reveals that the death toll in instances of police firing stands at 146. In May 2018, when the NHRC ordered an investigation into 17 cases documented in this report, the death toll in these police shootouts stood at 50.

The state government has repeatedly stated that the police actions leading to these killings was a “policy” to curb crime, which is another move towards normalizing police “encounters”.

The report has found that as of July 2020, magisterial inquiries had been completed in 74 cases where deaths had occurred during police firing. The police were given a clean chit in all these cases. Further, in around 61 cases, closure reports had been filed by the police, to close the investigation, and this had been accepted by the courts.

The report explains how the ambivalence in the law, coupled with the lack of an independent accountability framework to investigate and prosecute these killings, have ensured that there is no redress in almost all of these cases.

For decades, the police have taken advantage of the statutory recognition of self-defence as an exception to penal offences and have used it to grant themselves immunity from investigation and trial. It, therefore, becomes pertinent to test whether the existing law and its execution can ensure accountability and check the abuse of power by the police.

Non-registration of FIRs against police

The report rightly argues that the claim of the police firing in self-defence cannot be a reason to not register a first information report (FIR) for murder against the police team.

Of the 17 cases of extrajudicial killings analysed in the report, no FIR was registered in any against the police team that was involved in the incident. The police’s claim of self-defence was accepted merely because they had claimed it, without subjecting them to an investigation followed by a cross-examination and a trial.

The absence of an FIR against the police immediately after the incident, allows the police to create a version of the event, and for this version to go unchallenged. The police officers remain in service, they continue to be in positions where they can tamper with evidence and influence or intimidate any public witnesses.

The investigation into the role of the police team is not set in motion in the absence of an FIR against them. The non-registration of an FIR against the police pushes the family of the victim outside the system, unable to access any information or documents. It takes away their right to witness protection or compensation from the state.

FIRs filed against deceased victims instead

In 2020, the Supreme Court in its judgment in the case of G.S.Mani vs. Union of India, found it odd that an FIR under section 307 of IPC for attempt to murder and other offences was registered against the four people killed in a police shootout in Hyderabad. The court held that “it is obvious that no prosecution is contemplated against dead persons who can neither be tried nor convicted”.

The FIRs in each of these 17 cases are identical. It appears that two or three templates were used to fill in the time, date, place and name of the accused, and they do not differ in material ways. The FIRs contain identical sequence of events: details of spontaneous shoot-out between police officers and alleged criminals in which the police are fired upon, and then (in self-defence) fire back, leading to the death of the alleged criminals.

In all the 17 FIRs, the police fire in self-defence in response to incessant firing by the alleged criminals. All the FIRs state that the police fired at the criminals showing “indomitable courage and bravery”, using minimum force against them.

All the 17 FIRs state that while one criminal gets injured due to police firing, the other accomplices manage to escape. Further, each of the accomplices who escape, leave behind their vehicles in all cases, and their weapons in many cases.

Another recurring element in 16 of the 17 FIRs is the absence of any witnesses whatsoever to the purported shootout. The police have repeatedly claimed that they could not find any public eyewitnesses since the incident took place at night or early morning.

All the FIRs state that the police made efforts to apprehend the criminals. But the criminals attacked the police team, due to which the police were compelled to retaliate in self-defence. These details serve a dual purpose – first to show that the force causing death is justified in self-defence, and second, to bring the shootout within the scope of Section 46 of the Criminal Procedure Code, which permits the use of force, up till the causing of death, while trying to arrest an accused.

The accomplice who survives and escapes the police shootout also serves multiple purposes. It allows the police to keep an FIR alive against an “unknown accused”, it allows them to claim that the force used was not “excessive” (as other alleged criminals managed to get away). It also creates public fear that criminals are running free in the state, thus further justifying their own actions.

UP police have registered multiple FIRs for a single incident of extrajudicial killing. In many of the 17 cases, the police have registered three FIRs. One for the attempted murder of the police officials, and other IPC offences against the deceased victim and the unknown escapee. The second FIR is registered against the same people for carrying unregistered arms/guns under the provisions of the Arms Act, 1959. Many times, a third FIR is registered for concealment of stolen property or theft, or another crime that the deceased victim and the unknown escapee are said to have committed prior to the police shootout.

The registration of multiple FIRs for a single incident against the same accused is not consistent with the applicable legal standards. A second FIR is permitted only if the different FIRs are with respect to counter claims or different versions of the same incident, and if the FIRs are against different accused.

TOMORROW: How Investigation was tainted from initiation to Closure Report

(V. Venkatesan is the editor of The Leaflet. He has more than three decades of experience in journalism, and has extensively reported and commented on legal issues. The views expressed are personal.)