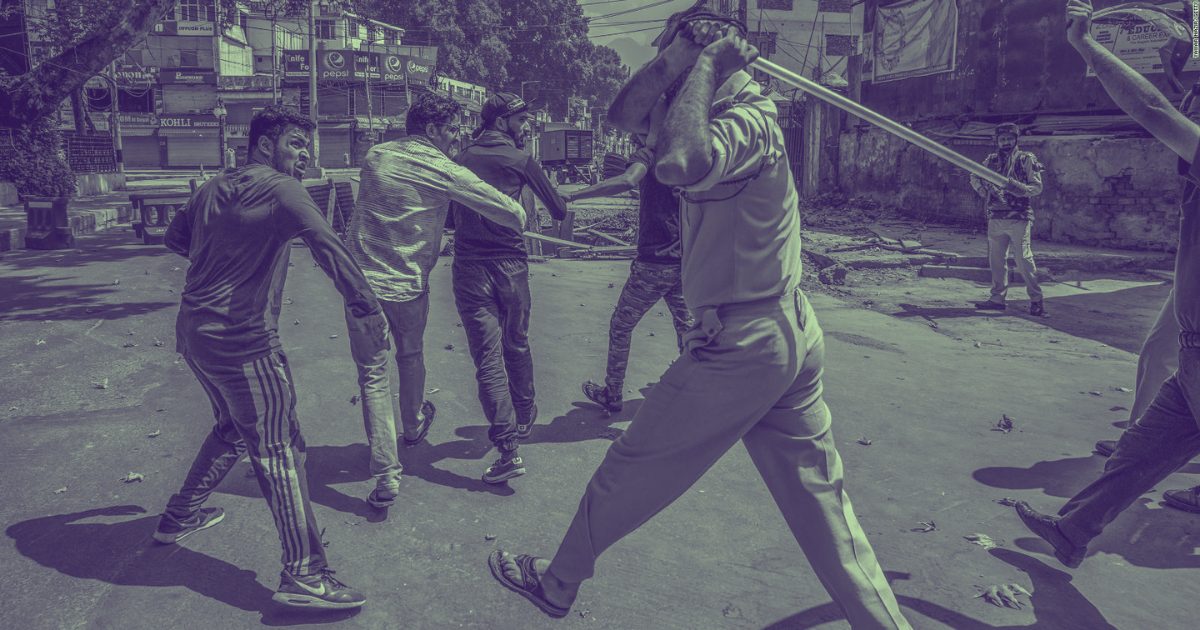 The unlawfulness of police brutality in India

Police violence and brutality have become a common occurrence in India, with little being done to demand accountability. Unjustified encounter killings and other forms of unconstitutional practices employed by the police deprive accused persons of their right to a fair trial and are in violation of Constitutional and legal provisions, writes ANURAG TIWARY.

TWO news stories from earlier this month should shake the conscience of every right-thinking citizen of this country. One is from Uttar Pradesh’s Agra district, where a sanitation worker, who was arrested for interrogation in a case relating to theft, died in police custody. The second is a violent video from the recent eviction drive in the Darrang district of Assam, which showed police personnel battering 33-year old Moinul Haque to death.

A constitutional democracy like India should not be proud of either of these incidents. It is unfortunate that the Chief Minister of Assam not only justified the actions of the police, but also went a step further and gave a communal colour to the entire incident. The Chief Minister of Uttar Pradesh has, in fact, repeatedly flaunted and publicly bragged about the state police’s supposedly noteworthy and remarkable achievements in controlling crime through several encounters and instances of brutality.

The normalization of police brutality

Police brutality is no more a rarity in India. Uttar Pradesh has seen 8,742 encounters ever since the BJP came to power there in 2017. These encounters have left 146 dead and 3,302 injured. In Assam, there have been 50 encounter incidents between May 10 and September 27, 2021 since the BJP government got re-elected, in which a total of 27 people have been killed and 40 left injured.

Statements made by constitutional functionaries and bureaucrats point towards the normalization of police brutality and extra-judicial killings. They also show that this has now become an unofficial policy of the State.

There are obvious political considerations involved behind such an unfortunate development. It benefits political parties and the powers that be by allowing them to control dissent, hide truths and mislead the voters through misrepresentation and conspiracies.

This piece, however, is an attempt to talk about the Constitution and the laws of India, and to remind and reinforce the principal idea that respect for human rights and the rule of law is non-negotiable in any constitutional democracy.

Understanding the nature of police brutality is critical to understanding the violations of specific legal provisions and constitutional mandates at several levels that are at play whenever the police consciously choose to act in complete defiance of their duties.

First is when the police, as an institution or through its officers, plays an active role by directly participating in the violence that ensues.

Cases of custodial deaths, extra-judicial killings, torture, and violence against protesters, are all illustrations of this form of brutality. The custodial death of the father-son duo in Tamil Nadu last year, violence against civilians, migrant workers and essential service providers during the lockdown that led to many deaths and the attack on the students of Jamia Millia Islamia during the anti-Citizenship (Amendment) Act protests in 2019 are a few examples. The extra-judicial killing of 4 rape accused in the Hyderabad veterinarian rape case last year, is another example of how the police uses unreasonable force and illegal means to carry out its supposed duty.

According to a 2014 article by India Today, methods of torture by the police include inhuman, degrading and barbaric practices that fall squarely within the description of third-degree torture. These are not sporadic incidents of police brutality, but appear to be part of the police administration machinery and have been normalized to an alarming extent in society at large.

No wonder, then, that Chief Justice of India N.V. Ramana recently remarked that “[t]he threat to human rights and bodily integrity are the highest in police stations”

The second, and often less talked about, form of police brutality is when the police is not an active participant, but instead stands as a mute spectator, thereby acting as a facilitator of the violence.

The dubious role of the police during the Palghar lynching and the Jawaharlal Nehru University attacks last year, for instance, would fall under this category. This form of brutality lacks judicial analysis and statutory backing.

In complete defiance of the Constitution and the laws

Both forms of excesses mentioned above show how the police, more often than not, act in complete defiance of several legal provisions and constitutional principles.

Extra-judicial killings by the police, for instance, are legally permitted and do not amount to a criminal offence in only three types of cases:

However, the recent public hearings by the inquiry commission appointed by the Supreme Court in the Hyderabad encounter case, points towards flagrant violations of the above law and several human rights principles, as well as exhaustive guidelines framed by the NHRC. The commission recorded several contradictions, anomalies and ‘chilling lies’ in the official narrative of the police.

Constitutional provisions such as Article 21, which guarantees the right to life and personal liberty, with a fiat that the State cannot act against an individual in violation of the ‘procedure established by law’, and Article 22 read with Section 303 of the CrPC, which grants every accused person the right to an advocate, also stand violated in cases of fake police encounters.

By engaging in such acts, the police effectively take away the right to a fair trial from the accused, and also sometimes cover up difficult and often uncomfortable truths that might have unravelled if a trial would have taken place.

Disregard for the judiciary

In case after case, the Apex Court has not just condemned acts of torture, violence, and extra-judicial killings by the police, but has also set the record straight by reinforcing the need to respect the law.

In Om Prakash vs. State of Jharkhand (2012), the apex court held that extra-judicial killings are not legal under our criminal justice system, and that the accused must be put on trial. In PUCL v. State of Maharashtra and Ors. (2014), the court reiterated that extra-judicial killings affect the credibility of the police as an institution and damage the principle of rule of law.

In this case, the court also issued a 16-point guideline for the police to follow as a standard procedure in cases of death during police encounters. The guidelines are as follows:

i. Any intelligence or tip-off regarding criminal activities must be recorded in writing or in electronic form.

ii. When in pursuance of a tip-off, the police use firearms that cause the death of a person, then an FIR must be immediately registered and forwarded to the court without any delay.

iii. Investigation into such death must be done by an independent agency or a police team of another police station.

iv. Mandatory magisterial probe in all cases of encounter death must be held.

v. The NHRC or SHRC must be immediately informed.

Any injured victim/criminal must be provided immediate medical aid and a magistrate or medical officer must record his statement.

vii. There should be no delays in forwarding the FIR, panchnama, sketch, and police diary entries to the concerned court.

viii. After a full investigation is carried out of the entire incident, a report of the same must be sent to the competent court to ensure speedy trial.

ix. In case of death of the accused criminal, their next of kin must be informed at the earliest.

x. Bi-annual statements of all encounter killings must be sent to the NHRC by the DGPs in a set format.

xi. Prompt action must be taken against a police officer found guilty of a wrongful encounter.

xii. The compensation scheme as described under Section 357A of the CrPC must be applied to grant compensation to the dependants of the victim.

xiii. The concerned police officer must surrender their weapons for forensic and ballistic analysis.

xiv. An intimation about the incident must be sent to the accused police officer’s family and he must be provided with legal aid.

xv. No out-of-turn promotion or instant gallantry awards shall be bestowed on the officers involved in encounter killings soon after the occurrence of such events.

xvi. If the family members of the victim find that the above procedure is not followed, then they may make a complaint to the Sessions Judge having territorial jurisdiction over the place of incident.

On the other hand, in cases of custodial deaths, the Supreme Court recently reiterated that such deaths and brutality by the police against an accused cannot be condoned, as it causes a sense of fear in the society and is a matter of great public concern.

Despite such legal and judicial sanctions, the police continue to take the law into their own hands, thereby assuming the position and power of a judge. The evolution of the police post-independence as an authoritarian institution has its roots in its colonial legacy, and the reputation with which the Britishers left the force at their time of exit from India.

The British rulers created the force for the sheer purpose of consolidating their misrule in India, and established an authoritarian regime that was completely subservient to the executive. This is precisely why they enacted the Indian Police Act of 1861 and placed the police under the control of the state governments. This colonial era legislation was later adopted by India post 1947, just like the majority of our laws today.

Under the colonial regime, the police were accountable to no one except their own officers. An example of this is Section 197 of the CrPC, which grants procedural immunity to a public servant accused of committing an offence while acting in his official capacity. The provision states that no court shall take cognizance of such an offence except with the previous sanction of the Centre.

Increasing brutality and institutionalized violence within the police force is inversely proportional to democracy and rule of law in any modern State. It is also reflective of the political ecosystem and the respect that institutions such as the Judiciary enjoy in the country.

When laws are openly violated, and such violations are justified and judgments by courts are not followed, one is forced to acknowledge that these are indicators of India’s steady movement towards  becoming a police state. Institutionalizing accountability within and of the police force is therefore the need of the hour.