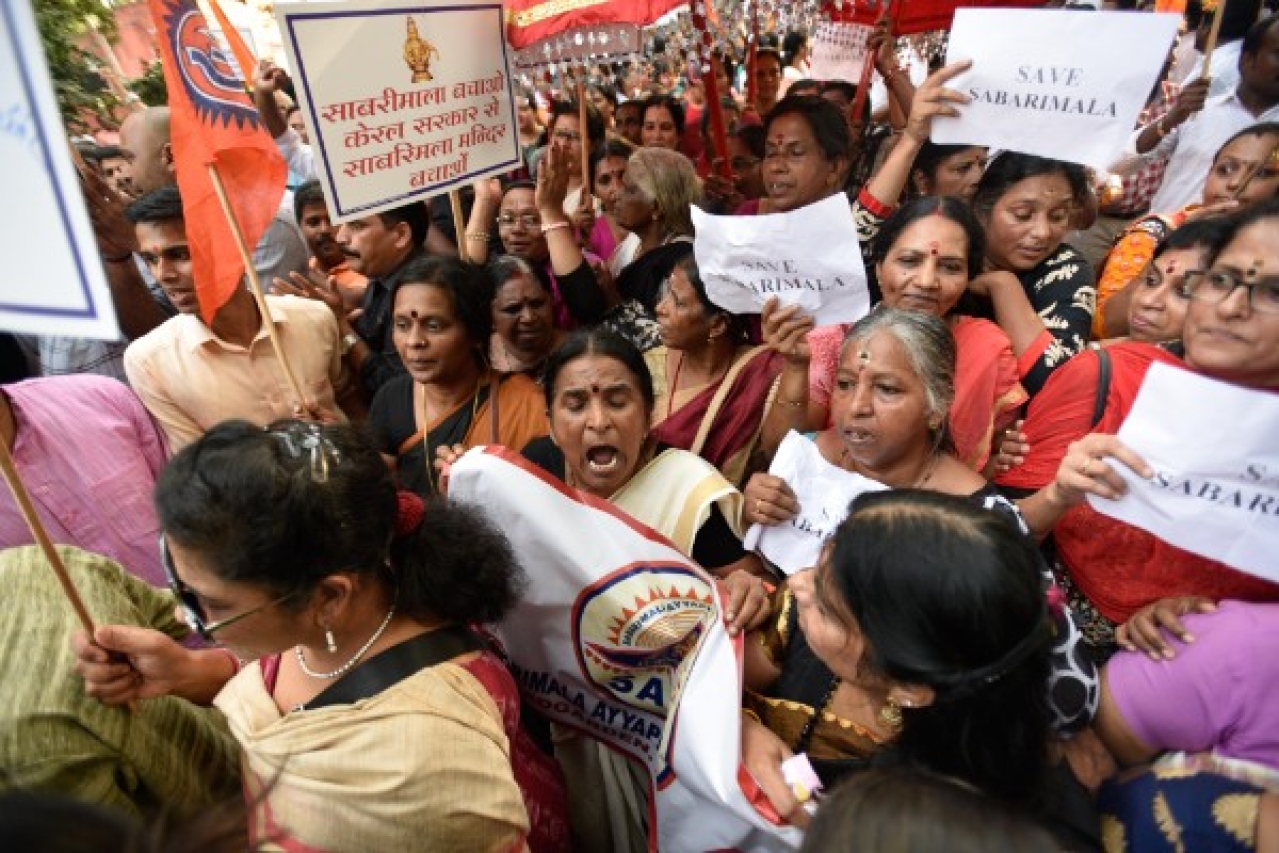 [dropcap]O[/dropcap]UR limited notion of violence suggests that only physical and tangible harm amounts to “actual” violence. This is why most of our society finds it easier to understand the kind of large-scale oppression and violence that barbaric practices like Sati instigated, as against the systemic prevention of allowing women into temples.

It is likely that Justice Indu Malhotra has followed the same underlying rationale in saying that “It is not for the courts to determine which of these religious practises of a faith are to be struck down, except if they are pernicious, oppressive, or a social evil, like Sati” in her dissenting opinion in the Sabarimala judgement.

The core point of the Sabarimala issue that makes it as harmful as it is, and the reason that many Indian feminists refuse to dismiss it as not being of paramount importance, is that it discriminates against women on the basis of their organic bodily functions. Sadly, the physiological process of menstruation is attributed to being the polluting essence of women.

In the language of the Constitution, this is a clear violation of Article 14. As Senior Advocate Indira Jaising has argued, this also violates Article 17. This argument is especially important in light of the various review petitions heard on February 6, 2019.

Article 17 reads that “Untouchability is abolished and its practice in any form is forbidden”. This clever usage of language leaves the definition of untouchability open to interpretation based on the circumstance.

The petitioners in the recent review hearing have submitted that the judgement has erroneously interpreted the historical context of this term. However, the notion of untouchability has always been entrenched against women in preventing their entry into kitchens, water sources, community eating spaces and even sharing clothes. Women as a class have always been subject to the concepts of “impurity” and “pollution” based on menstruation.

The dissenting judgment by Justice Indu Malhotra has been premised on how the courts should not intervene in religious matters as religious beliefs need not be logical or acceptable. The petitioners have reiterated this view in the February hearing.

Justice Indu Malhotra has used various cases from the United States to support the view that the state must not interfere in religious matters.

The First Amendment of the US Constitution reads “Congress shall make no law respecting an establishment of religion, or prohibiting the free exercise thereof; or abridging the freedom of speech, or of the press; or the right of the people peaceably to assemble, and to petition the Government for a redress of grievances.” The Free Exercise clause that constitutionally allows people to profess their religion without any restrictions is what concerns us the most.

The United States Supreme Court has changed the direction of its decision on how much the state can interfere with religious practices over the years. It is known that there is no singular and decisive stance which the courts have stuck to. Initial cases have held that governments may not interfere with religious exercise unless there is a breach of public morals but that conduct remains subject to regulation for the protection of society. [See Reynolds v. United States, 98 U.S. 145 (1878)]

This rationale aligns with one of the cases that the dissent itself has cited, which says that these religious practices cannot contradict “both constitutional tradition and common sense.” [See Employment Division, Department of Human Resources of Oregon v. Alfred L. Smith 494 U.S. 872 (1990).]

The dissenting judgement has been picky in the way that the stance of the United States has been presented. The judgements that have been used are specifically in support of non-interference of the state into religious matters inspite of the lack of uniform stance taken by the US court itself, and on the basis of that, it has drawn the conclusion that judicial review of religious practices should not be undertaken.

The State versus Religion debate in India cannot be resolved with the differing stance of the US.

The Constitution of India precedes all other kinds of authority, and the role of the judiciary is to protect our constitutional values. While the court itself cannot impose its morality or make judgements on these religious beliefs, it has the duty to uphold the basic values of the constitution that defines constitutional morality.

Equality and non-discrimination are important facets of constitutional morality. Religion cannot be used as a veil to discriminate, and the courts cannot be bystanders in this process or selective in their method of intervention. The “secularism” argument that a pluralistic society with different faiths has to be necessarily tolerant of this grand oppression defeats the very purpose of our justice system.

The backlash against the women who are exercising their right to temple entry even after the pronouncement of the Sabarimala judgment which explicitly allows them enter, is testament to the kind of violence this has caused. Kanakadurga, one of the first women who managed to enter the Sabarimala Temple after many obstructions, is now struggling with her family for housing, acceptance and love. Fighting for her rights has cost her basic security, and resulted in being assaulted, thrown out and with no support system.

Here again, we see a form of untouchability being practised against the woman in excluding her from the household itself. Senior Advocate Indira Jaising has accurately pointed out to how this extends beyond just “exclusion” and to a complete social boycott. The purification rituals that were conducted inside the temple after the first two women entered is reflective of the deeply entrenched notion of untouchability.

The likes of Catherine Mackinnon have long argued that “political” violence against women, and the daily psychological harms caused have to be recognised and fought against. [See McGlynn, C. (n.d.). Rape as “Torture”: Catherine Mackinnon and Questions of Feminist Strategy.]

Importantly, the review petitions’ hearing has brought up the implications of young girls being viewed as nothing more than sexual objects when we say that they will be detrimental to male celibacy.

The Travancore Devaswom Board itself has opposed the review petitions and has decided to respect the judgement of the Court. This is the time when we take positive directions towards ensuring women’s constitutional right to enter the temple. Judgments cannot end the fight, and mobs cannot continue to be an obstacle.

As Indira Jaising has pointed out, the next opening day of the temple, February 12, should see active steps for the protection of women being taken. Discrimination that is based on menstruation is pernicious, oppressive and a social evil. We have been ousted for too long, and denied too much. The Courts must call for change that the Constitution stands for, and the society must lend its ears to this.