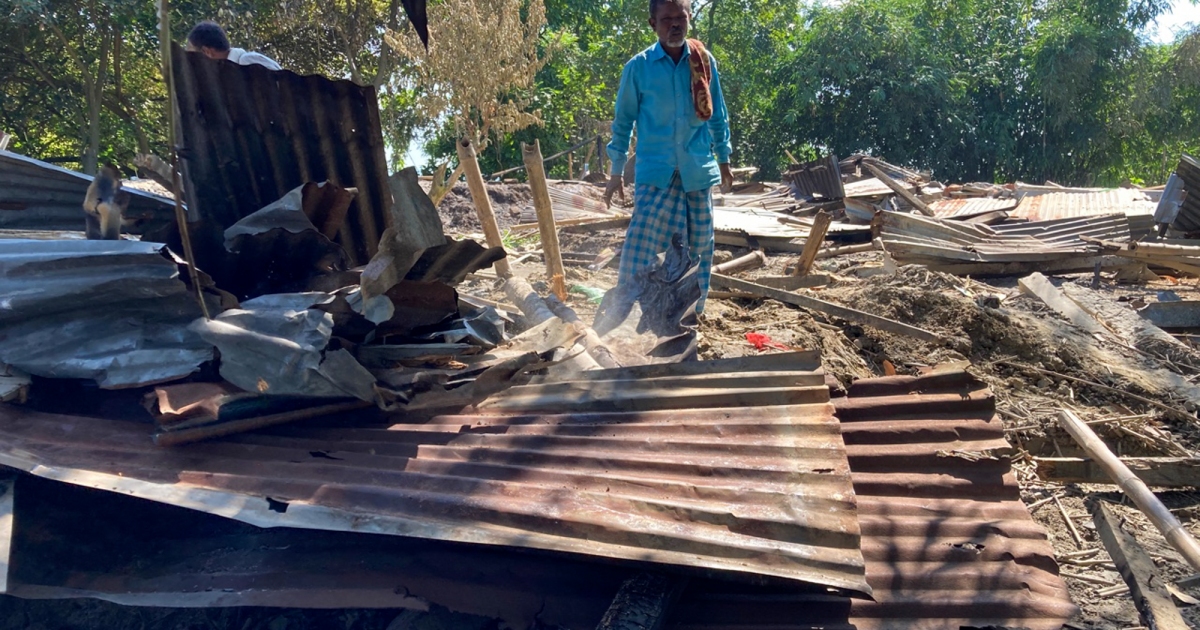 Government endorsed evictions have led to the deprivation of the right to life of minorities residing in Assam. HRISHI RAJ ANAND writes about the historical role the state government has played in bringing matters to a head, resulting in communal violence and alienation.

IT is not until some brutality happens that we stop turning a blind eye to a long-festering problem. Assam, and in fact, all the North-Eastern states have always been victims of the negligence of the Centre and the rest of the country.

With all that has been happening in Assam recently, it is crucial to address the historical context that led to the brutal incident wherein two Muslim men were shot dead by police personnel during a protest against their displacement from some land. A video of the incident gained widespread attention, becoming viral.

This incident is a product of almost a century of political and cultural resistance to the large-scale migration of Muslims from East Bengal, beginning in the 1900s. Like most of Assam, these people have been victims of floods every year, and have either been displaced or have migrated to avoid loss of life and livelihood. To a large extent, this cycle of inundation has been made unavoidable as a result of State action.

It has been evident for decades that it is impossible to control the flow of the Brahmaputra. Despite this being the case, year after year, official assessments are presented to the central government that underplay the impacts of redirecting flow. Thereafter, dams are built under the guise of flood prevention, but only serve the purpose of power generation. Aid packages are granted each year to mitigate damage, rather than to build back better and minimize risk, once again commencing the cycle of destruction the region suffers.

If one were to look at the flood affected areas, 36% of the land or more than 2.5 lakh people are affected regularly, making displacement an unavoidable reality for the people of Assam. This constant displacement has resulted in the people not being able to settle in one area and hence, remaining landless. The evictions that have become widespread in the state also add to these problems.

Two factors that have aggravated the situation are the cultural differences between the migrants and the indigenous people of Assam, and the State endorsed communalism that has gripped Assam. The Union Home Minister Amit Shah has used the term “termites” to define these immigrants.

“Researchers of genocidal trends say that repeated use of dehumanizing terms like ‘termites’ targeting other groups of people, enable the dominant group to inflict horrific harm on others without any conscience, as the minority groups are not seen as humans or one of their own,” tweeted Manu Sebastian, the Managing Editor of Livelaw.

There have been three major evictions in the area in the past five years. The first, in November 2016, another in January 2021, wherein 22 households were evicted, and the last, in June 2021, where 49 families were evicted. This has been the story of the people of the Darrang district.

These State endorsed activities have shown a total negligence of the right to life, a fundamental right listed under the Indian Constitution.

Courts have, in various judgements, observed how governments try to eradicate the marginalized and deprive them of their right to shelter, guaranteed under Article 19(1)(e) of the Constitution. In the case of Sudama Singh vs. The State of Delhi (2010), a case involving the relocation of petitioners residing in slum clusters, the Delhi High Court stated clearly that the ones being evicted must be provided with compensation and alternative accommodation.

In its judgments in Chameli Singh Vs The State of UP (1995), the Supreme Court stated that “[t]he right to shelter … does not mean a mere right to a roof over one’s head but right to all the infrastructure necessary to enable them to live and develop as a human being. Right to shelter when used as an essential requisite to the right to live should be deemed to have been guaranteed as a fundamental right.” It held that the right cannot be compromised by the state governments without reasonable justifications recognized by law, or without providing sufficient remedy.

The eviction initially started with the SP of the Darrang district threatening the people of Dhalpur to remove encroachments in an isolated temple area. There were only three Hindu families in the area, out of which two had migrated to other villages back in early 2000s, and the one remaining family took care of the temple.

On June 5, 2021, an eviction notice was issued to residents living around the temple area, and the very next day, about 49 families were evicted, giving them no time to find themselves an alternative.

Also read: Suspicion as evidence: The Supreme Court’s Sarbananda Sonowal judgments, and the chimera of legitimacy of foreigner tribunals

As reported by Time8, Reshma Khatun, an evicted villager, narrated, “Last night they informed us of the eviction and today as I saw the JCB, I had to run away with my goats. I fell on the way and had to get 10 stitches for which I did not have the money. Hence, I had to sell one of my goats to get my first aid.” She further told them that she was advised to get an injection that would cost about INR 200, which she could not afford. This eviction, just like in the case of Dhalpur village, had been supervised by Sushanta Biswa Sarma, the younger brother of Chief Minister, Himanta Biswa Sarma.

According to the MLA of Sorbhog, Manoranjan Talukdar, it was not the first time that a communal agenda was being pushed by this regime.

He has suggested that similar cases of eviction have been seen before in Kaziranga, Mayong and now in Dhalpur, ever since the Bharatiya Janata Party (BJP), came to power in 2016.

The minority group that migrated to Assam, has been growing four crops a year instead of following the usual one crop pattern that is practiced by the indigenous people of Assam. This is where the decades old conflict began, and hatred started to act as a catalyst to the situation that we see today. Constant methods of intimidation and ostracisation of the minorities have been seen in Assam for a long time now. One such method was through the Illegal Migrants (Determination by Tribunals) Act of 1983, which was struck down in 2005. The Supreme Court, in the case of Sarbananda Sonowal Vs Union of India, observed that the rate of identifying illegal residents was less than half percent of the cases initiated. The three-judge bench also ruled that, “the law has created the biggest hurdle and is the main impediment or barrier in the identification and deportation of illegal migrants.”

“When the temple land did not fall for a good foundation of their purpose, the government later brought in agriculture to support their eviction campaign,” mentioned Suprakash Talukdar, a central committee member of the Communist Party of India (Marxist).

Originally, the area quoted by the government for farming was 70,000 bighas. When the same was brought up in the Assembly, a different picture was painted. The Circle Officer, sent by the government itself, found that the land was only 25,000 bighas. “This difference highlights the mismanagement, data manipulation and intent of the regime,” said Suprakash. Not to forget, around 50,000 people would be affected if this eviction was to be carried out.

There is no doubt that this area of Dhalpur is very rich and fertile when it comes to the soil and must be used effectively for agricultural purposes. However, the question that arises here is whether eviction is the only way out. For instance, the government could engage the people of the same vicinity for farming purposes. It would not just generate employment, but would also diminish the backlash that the government has been facing.

Another fact to consider here, is that the southern area of Dhalpur has a vacant land of about 2,000 bighas. Why not use that land to start farming? “Currently, there are many schools, 32 anganwadis and 2 dispensaries which are government aided in the area making a habitation possible there. There is an electricity supply too. Why be adamant on depriving people of basic amenities by evicting them who have managed to come so far in 40-50 years of their habitation instead of permanently settling them in that area,” questioned Talukdar.

Another exercise that has led to the victimization of people in Assam has been the NRC (National Register of Citizens). The process has been going on for years, and has only resulted in the detention or witch-hunt against  minority groups. In a report by journalist Rohini Mohan, it was seen that in one district court, 82% of the people on trial had been declared foreigners.

She also found that such findings were disproportionally biased against Muslims, and that 78% of the orders were delivered without the accused ever being heard.

In most of these cases, police said they were “absconding” but Mohan found many of them living in their villages, unaware they had been declared foreigners.

Another aspect here that requires attention is that most of the families that have faced eviction or are being declared foreigners, are not financially stable enough to file a legal claim. Although the government in its defence suggests that the NRC has got nothing to do with religion, it has been observed time and again that a majority of the people falling prey to the law are Bengali Muslims.

What does not go unnoticed is that every time, the eviction notices have been issued just one day prior to the eviction. In Dhalpur, people received a notice from the Circle Officer at around 10 p.m., the night before the eviction took place.

The eviction process was started at noon on September 23, 2021 while the villagers continued to revolt. The police brutality that we all saw is what followed.

These instances must not be looked at as outliers that can be remedied by the State’s damage control machinery. The problem here is systemic, and  must be addressed accordingly.

Conversations need to be moulded along the lines of communalism, hatred, and the NRC, with solutions that involve all stakeholders. The onus lies on the central and state government for all that has been happening, and any solutions must address the root of the problem.

(Hrishi Raj Anand is a freelance journalist from Jharkhand writing on the rural, tribal and policy issues of the country. The views expressed are personal.)