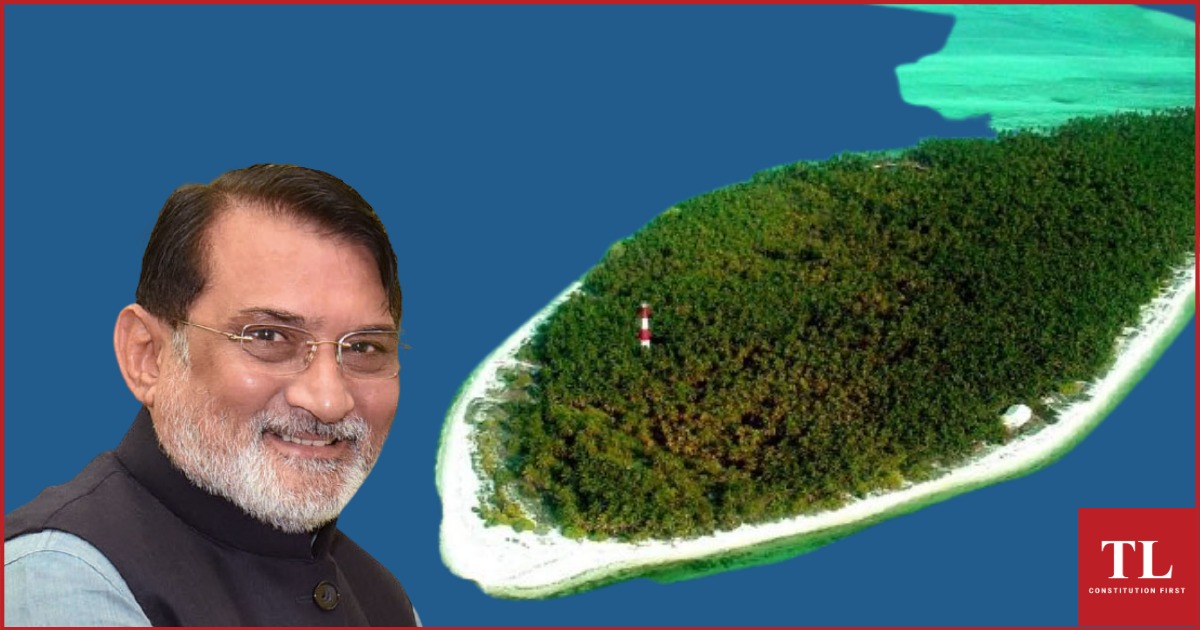 Untrammelled Power by Lakshadweep Administrator is Against Democracy

Recent regulations passed by Praful Patel, administrator of the Islands, have led to a furore among the people there as they smack of authoritarianism and high-handedness. Being a BJP party leader, it is assumed he is carrying out the orders of the centre. But these arbitrary actions can be challenged as they affect the Fundamental Rights of the inhabitants of Lakshadweep. Discretions given to the executive often tend to be abused. Therefore, strict judicial review and public scrutiny are needed in such cases, write ROHAN WADHWA & MAHAK TANWAR.

UNDER the Indian Constitution, there are several safeguards to prevent any misuse of power and arbitrary action by the executive. In India, Union Territories (UTs) are under the direct control of the president, who indirectly operates as per the Union government. This grants the centre untrammelled power to govern these UTs.

The central government recently appointed Praful Patel as the administrator of Lakshadweep.

This is considered a political act by many as the centre digressed from the tradition of making an IAS officer the administrator of the UT and instead, appointed one of its party leaders.

Lakshadweep has no legislature (unlike Delhi) and all powers to govern it are reposited with the administrator.

Recently, Praful Patel recommended various regulations which have not been conceived well, as per the inhabitants of Lakshadweep Island. As a result, they and opposition parties protested.

The exercise of power by the Lakshadweep administrator shows that executive action is capable of changing the social, cultural, environmental and economic landscape of the entire UT.

The administrator reasoned that these regulations could be used to develop and control land, improve amenities and acquire land for overall development.

These regulations aim to encourage tourism, maintain sanitary conditions, conserve public health and for the general welfare of people living in the UT. However, these regulations also provide an extraordinary power to the “planning and development authority” (chairman and members of which will be appointed directly by administrator) as well as the “chief town planner” (who is directly appointed by the administrator).

For development, the administrator has arbitrary and discretionary powers, which include construction of buildings, cutting of hills, relocating/ rehabilitating/resettling the population, power to declare any area as a planning area and zoning of land for residential/ commercial/ industrial/agricultural purposes. The chief town planner has the sole power to come up with developmental plans for the entire island, acquiring land and properties of the natives for developmental purposes and levying of arbitrary charges on individuals who wish to develop their land. Lastly, Section 117 of these regulations puts a bar on any legal proceedings against those executives who have given orders in good faith under the regulations.

These regulations prohibit slaughter without certification from a competent authority and Section 5(2) prohibits the issuance of such certificates for the slaughter of a cow, calf of a cow, bull or bullock. The Act also prohibits religious sacrifices of animals mentioned under Section 5(2), but allows those of other animals.

Before 2017, the laws governing cattle slaughter in India varied from state to state. However, in May 2017, a nationwide ban was imposed on the sale and purchase of cattle for slaughter under the Prevention of Cruelty to Animals laws.

In Mohd. Abdul Faheem Qureshi v. UOI, the Supreme Court upheld the stay on the centre’s ban on cow slaughtering and said that the direction of the Madurai bench of Madras High Court in S. Selvagomathy v. Union of India in suspending the centre’s ban on sale and purchase of beef in India will apply to the rest of India. It also said to the government that the law itself allows cattle slaughtering. It also said that the ban on cattle slaughter is under the state list and it also infringes on the right to carry out free trade.

This ban was suspended in July 2017 through this apex court judgement, giving relief to leather and beef industries. This is problematic for Lakshadweep as it does not have a legislative assembly and comes under the indirect control of the Union government whose idea may not resonate with the local population.

Section 7 of these proposed regulations even restrict the movement and transportation of animals mentioned in Subsection (2) of Section 5 within the UT. The authority can also presume that such transportation was done to slaughter that animal unless such presumption is rebutted by the party transporting the animal.

Section 9 provides power to the executive to enter a premise and inspect, upon the belief that an offence under this regulation has been made.

Section 10(2) provides punishment to individuals who are found in violation of Subsection (2) of Section 5 with life imprisonment and shall not be less than ten years, with a fine which may extend up to Rs 5 lakh and not less than Rs 1 lakh.

Section 11 makes offences under these regulations non-bailable and cognisable.

These regulations are drafted to provide for preventive detention of perpetrators of offences as defined in Section 2 to maintain public order.

Section 3 of these regulations gives power to the administrator to make an order for preventive detention of an individual upon his/her satisfaction.

A detention order can be passed against any individual for the offences explained in Section 2 of the regulations. For Section 3, public order will be deemed to be violated if any person causes a feeling of insecurity amongst the general public.

Section 13 of this regulation says that the period of preventive detention shall be one year from the date of detention. As per the NCRB data, Lakshadweep has one of the lowest crime rates among states and UTs. The Supreme Court, through various judgements, has asked governments to refrain from the use of extraordinary law to curtail Fundamental Rights.

The arbitrary action of the administrator is liable to be challenged as it affects the Fundamental Rights of the inhabitants of Lakshadweep. Justice Bhagwati in EP Royappa v. State of Tamil Nadu remarked that “equality and arbitrariness are sworn enemies; one belongs to the rule of law in a republic while the other, to the whim and caprice of an absolute monarch”.

In Maneka Gandhi v. Union of India, Justice Bhagwati said that the “principle of reasonableness is an essential element of equality or non-arbitrariness under article 14”. The regulations formed by the administrator of Lakshadweep have the power to affect Fundamental Rights under Articles 14, 19, 21 and 25 of the Constitution.

In India, judicial review cannot take place regarding the legitimacy of the aim or reason of the order. However, judicial inquiry can be done to check if the purpose can be achieved by a less restrictive alternative, i.e., “necessity” of the action. Secondly, it can check whether any executive action is justified in the interest of democratic society i.e., balancing of the order with the interests of society.

As per the NCRB data, there exists no crime, and regulation which allows for preventive detention on account of practically all crimes defined in the IPC is not “necessary to maintain public order”.

The regulation which calls for development and planning of Lakshadweep has the potential to affect Fundamental Rights as it is up to the discretion of the authority to acquire land, convert residential area to commercial area and re-locate the population for development.

Wherever there is discretion in the hands of the executive, it tends to be abused on account of multiple factors ranging from social to economic. Law-making bodies in democracy echo the sentiment of the public. However, in such instances where an executive is a law-making body,  strict judicial review and public scrutiny should take place of regulations which provide extraordinary power to the executive.