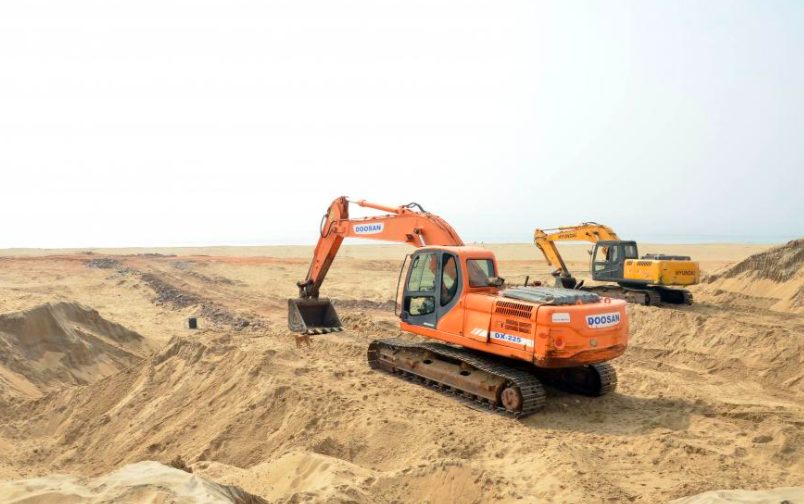 Six journalists were booked in Madhya Pradesh’s Khargone district on July 2 for alleged rioting and abusing on the complaint of District Mining Officer (DMO), according to the police. Reportedly, the journalists had gone to meet the DMO on the same evening seeking his comment on the issue of rampant illegal mining and storage of sand in the district.

According to the police FIR, all six journalists have been booked for misbehaving, abusing DMO Sawan Chouhan and making casteist remarks against Chouhan who belongs to the scheduled caste. Chouhan’s complaint lists that the argument with the journalists ensued after they were asked to wait outside his office. The charges levelled against the journalists include section 147 (Punishment for rioting), 294 (singing, reciting or uttering of any obscene song, ballad or words, in or near any public place), 353 (Assault or criminal force to deter public servant from discharge of his duty) and 506 (Punishment for criminal intimidation) of the IPC and sections of SC/ST Atrocities Act-1989.

The accused journalists are reporteldy associated with NDTV, ABP, News Nation, Nation Today (a web portal) and local dailies. “They misbehaved and abused me by my caste in my office which hurt my sentiments,” DMO Chouhan told NewsClick over phone from Khargone.

“Based on the facts and eyewitnesses presented by the DMO to police, an FIR has been registered against six journalists and a probe is on,” said Shailendra Singh Chouhan, Superintendent of Police.

Interestingly, a day after the incident, Kamal Patel, Agriculture Minister and Minister In-charge of Khargone condemned his own government as well as Khargone district collector and SP for registering FIR against the journalists. Addressing a rally in the region, Patel on July 4, said, “If anyone is found mining sand from the Narmada river illegally with poclain machines, they must be booked under the National Security Act-1980. Otherwise, I will take action against the district collector and SP.”

He further said, “Instead of taking stern action against the sand mafia, the FIR is being registered against journalists who are exposing them.”

“Besides, a written complaint has also been made by one of the accused journalists Pradeep Gangle, belonging to ST community, at the SC/ST Police Station against the DMO and mining inspector Reena Pathak and investigation is underway,” he added.

In the complaint, the journalists have alleged that they were framed in a fake case by the DMO under the pressure of the sand mafia when they raised the issue of illegal mining, storage of sand and theft of taxes prevalent in the district.

“Three days ago, NDTV ran a story on illegal mining and storage of sand in the district which had irked the contractors and government officials,” said Praveen Gangle, one of the accused journalists associated with the news website Nation Today.

Another accused, journalist Wahid Khan, works for News Nation, said, “After taking an appointment, when a group of journalists reached the District Mining officer’s office, contractors Dinesh Yadav, Zila Mahantri of the Bharatiya Janata Party’s youth wing and Amit Bhawsar, a BJP worker and other contractors were already there. Under their pressure, he refused to comment.”

“Interestingly, both the leaders associated with the BJP were eyewitnesses in the FIR,” he added.

In addition to that, a journalists’ union of Khargone has also given a written application to the district collector for a fair investigation in the matter.

In the application, the president of the journalists’ union Sunil Sharma has claimed that RK Gupta and Company has been given the contract of sand mining in the district and Dinesh Yadav and Amit Bhawsar for Khargone Nagar. “They were not only illegally mining the sand but also stocking it and journalists have gone to take bytes over the allegations, but instead they were booked in a fake case,” the application said.

In the last three months, nearly 14 journalists have been booked in Madhya Pradesh for reporting on irregularities in the management of COVID-19 and dalit atrocities.