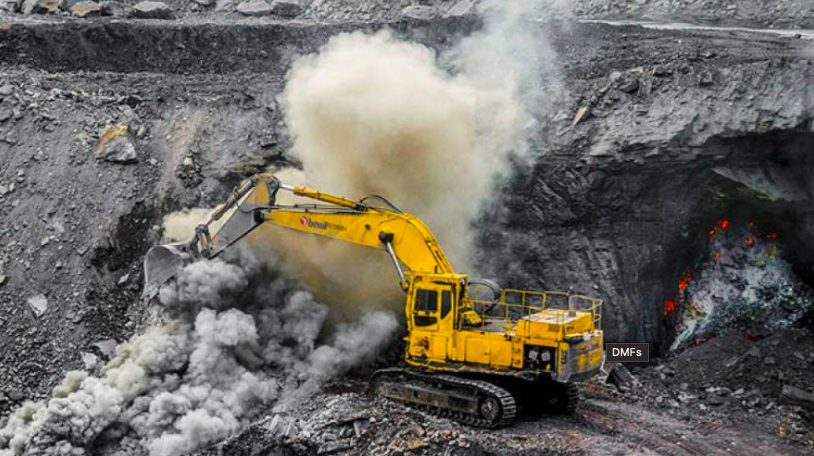 In what is being termed as a compromise of the federal structure of the Indian polity, the Modi government has taken direct control over funds worth more than Rs 25,000 crore earmarked to be spent on people and communities affected by mining activities across the country. In an order issued on July 12, the union government has directed state governments not to spend a penny out of the funds of District Mineral Foundations (DMFs) which have been collected as a certain percentage of royalties from mining leaseholders.

In the past more than five years, DMFs in 600 districts of the country have collected Rs 50,499.57 crore from mining leaseholders of both minor and major minerals. However, as per data collected by the Union Mines Ministry, state governments have already spent Rs 24,499.76 crore from these funds till June 2021 on various projects undertaken by them. Now, the latest order by the ministry has disempowered state governments from taking any decision on the utilisation of the remaining funds available with the DMFs.

“No sanction or approval of any expenditure out of the fund of the District Mineral Foundation shall be done at the State level by the State Government or any State level agency,” the ministry has said in its order.

Apparently, the Modi government has issued the direction after taking notice of the fact that funds from DMFs were being diverted by state governments for schemes and projects that were remotely connected, if at all, with the welfare of mining-affected communities.

“It is inappropriate on the part of state governments to divert funds from District Mineral Funds for purposes other than using the same for the benefit of those affected by mining in the districts concerned. If such instances are few, the central government should have dealt with individual cases rather than invoking powers to diminish the authority of state governments to sanction expenditures from the funds. It will amount to eroding federalism. However, it is equally disturbing that state governments should fritter away the freedom given to them by transgressing provisions,” retired bureaucrat EAS Sarma told NewsClick.

Of late, there have been numerous instances of misallocation of DMF funds by certain state governments. Earlier this month, members of the Opposition Congress party in Odisha demanded a probe through the Comptroller and Auditor General (CAG) of India into allegations of mismanagement of DMF funds in the state. As per their allegations, not only has the Biju Janata Dal state government under-utilised the DMF funds, but has also diverted certain amounts for “urban centric” works.

In Madhya Pradesh, for instance, the BJP government has reportedly constructed an airstrip in Singrauli district, an area ecologically devastated by air and water pollution from large thermal power plants, out of funds derived from the DMF. This airstrip was inaugurated by the state’s Chief Minister Shivraj Singh Chauhan in December 2020.

There have been reports of large scale corruption too in the utilisation of the DMF. An inquiry conducted by the tribal welfare department of Chhattisgarh in the year 2019 had revealed large scale irregularities in works undertaken in Korba district with funds from the DMF. These irregularities had taken place mostly during 2016-17 when Chhattisgarh was being ruled by the BJP.

If funds from the DMF have been diverted for purposes other than those meant for the welfare of mining-affected people, has it been the state governments alone that have resorted to this practice? Interestingly, state governments have also been asked by the Centre to divert funds from the DMF. In the relief package that was announced by Union Finance Minister Nirmala Sitharaman in March 2020 in the wake of the outbreak of Covid-19 in India, state governments were issued directions to spend money from DMF funds for combating the pandemic.

“The State Government will be asked to utilize the funds available under District Mineral Fund (DMF) for supplementing and augmenting facilities of medical testing, screening and other requirements in connection with preventing the spread of COVID-19 pandemic as well as treating the patients affected with this pandemic,” the central government had directed.

Moreover, is it the district-level authorities who take decisions when it comes to allocation of funds from the DMF for purposes other than that for which it has been envisaged?

“Ideally, these DMF funds should be allocated and utilised by Gram Sabhas which are the most basic units of governance. But, this latest decision of the central government makes it incumbent upon administrative authorities at the district level to collect the funds while having no power over its expenditure whatsoever,” said R Ravi of Mines, Minerals & PEOPLE (mm&P), an alliance of people and communities affected by mining.

The Modi government is credited with bringing in a law for formation of DMFs in all districts through a set of amendments that it carried out to the Mines and Minerals (Development & Regulation) Act, 1957 in the year 2015. As of June 2021, state governments had allocated Rs 47,288.36 crore from the funds that they had collected thus far. Data shows that as of June 2021, as many as 61,460 projects are underway with funds allocated from the DMF while work on 24,965 projects, for which funds have already been allocated, are yet to begin. These projects have been undertaken by state governments through decisions taken at their own level.

What fate awaits these projects? Also, how does the union government plan to utilise funds from the DMF for the benefit of those affected by mining now that it has taken complete control over it? These questions have been emailed to the Union Mines Ministry on behalf of NewsClick. No response had been received from the ministry at the time that this news article was being published. It will be updated as and when the ministry responds to these queries.

The diversion of DMF funds for other purposes has effectively shortchanged the poorest and the most marginalized sections of the society, including forest-dwelling Scheduled Tribes, who reside in the mineral-rich areas of the country.

“It is also important to go beyond the debate of state versus central control of DMF funds. These funds are justified by continuing the culture of extraction in areas deemed as mining geographies. DMF may provide some opportunity to compensate for past harms but should not be a mechanism to freeze the imagination that mining and resource extraction is the only future for mineral bearing areas,” said Kanchi Kohli of New Delhi-based Centre for Policy Research.