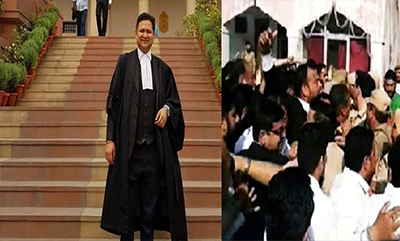 [dropcap]A[/dropcap]seem Sawhney, a lawyer representing the main accused in the rape and murder of 8-year-old Muslim nomadic girl in Kathua, has been appointed as the Additional Advocate General by the Jammu and Kashmir government, evoking widespread outrage.

His promotion from a deputy advocate-general’s position, as expected, is being viewed as “insensitive on several grounds”. Former Chief Minister and PDP president, Mehbooba Mufti has denounced it as “ironic” and urged Governor NN Vohra to intervene. On Wednesday, Mehbooba took to Twitter, and said “Ironic that a day after celebrating World Day for International Justice, the defence counsel in the horrific rape and murder Kathua case has been appointed as Additional Advocate General.”

“Rewarding those who defend alleged murderers & rapists is abhorrent & a shocking violation of the spirit of justice. Such a move will only serve to encourage the rape culture rampant in our society. Expect the @jandkgovernor to intervene,” she added.

Earlier, the criminal incident saw majority of Jammu lawyers rallying in support of the rape accused and blocking the Crime Branch from filing the charge-sheet in a local court. It also saw some BJP MLAs, including two cabinet ministers in the state’s coalition government, openly siding with the accused and giving provocative speeches

The gruesome rape and murder that was reported in January this year not only divided the state on communal and regional lines, but also created cracks in the state coalition government, that eventually led to its collapse. Currently, there is Governor’s rule in the state since the People’s Democratic Party (PDP)-Bharatiya Janata Party (BJP) coalition government collapsed after the latter dramatically pulled out of three-year-old alliance on June 19.

Earlier, the criminal incident saw majority of Jammu lawyers rallying in support of the rape accused and blocking the Crime Branch from filing the charge-sheet in a local court. It also saw some BJP MLAs, including two cabinet ministers in the state’s coalition government, openly siding with the accused and giving provocative speeches.

After the intervention of Supreme Court, the case was transferred from Kathua to Pathankot in Punjab — where day-to-day in-camera trial as directed by the apex court is going on.

The eight accused in the case including four police officials, according to the charge-sheet, had drugged and repeatedly raped the eight-year-old Bakarwal girl for over a week in Kathua district’s Rasana village before she brutally murdered. All this was done in an attempt to intimidate and dislodge her community from the predominantly Hindu village.

Aseem, who represents an accused head constable, is one among the battery of lawyers from Kashmir Valley and Jammu region who were appointed as additional advocates-general, deputy advocates-general and government advocates in the Jammu Wing of the Jammu & Kashmir High Court on Wednesday.

Defending his appointment, Aseem promptly responded to Mehbooba’s tweets on Tuesday and wrote, “I am a lawyer or an accused? Be nice to me, I may be your lawyer one day as a saying goes @ Mehbooba Mufti”.

“Hadn’t been conducting #Rassana_trial since July 2 due to preoccupations in HC, moreover having been a lawyer for one of accused does it make a lawyer an accused too. Lawyers are professionals and can’t refuse briefs. As AAG will now not contest any case against State”, Sawhney maintained in his second tweet.

Last month, he told a national Hindi daily, Amar Ujala in Gurdaspur that Rasana, the village where the rape and murder took place —  was becoming a safe-haven for Pakistani terrorists, cow smugglers and drug peddlers.

When confronted over such unfounded statements, Aseem appeared to be at a loss to explain his position. Here’re the excerpts of his conversation with the reporter:

Q: Could you elaborate the statement that you gave to Amar Ujala in Gurdaspur last month? You claimed that Rasana is becoming a safe-haven for terrorists, cow smugglers and drug peddlers?

And since now I have become State’s law officer, what I did in the past, I would neither comment on it nor explain it.

The Leaflet: Don’t you think it was irresponsible on your part to give such a statement to a newspaper?

Aseem Sawhney: It was not my statement.

The Leaflet:: But it’s still there on the website of Amar Ujala…

Aseem Sawhney: They must have ascribed Ankur Sharma’s statement to Aseem Sawhney. Such mistakes do happen and later newspapers carry smaller corrigendum… Whether I have said it or not, there is no proof of that.

The Leaflet:: This news never came to your notice…?

Aseem Sawhney: There are so many newspapers. Do you expect me to read each and every newspaper?

The Leaflet:: But Amar Ujala is a leading newspaper…

Aseem Sawhney: I don’t read Hindi newspapers…. I am not speaking to you officially…. I am not saying anything on record. I expect you to please respect my privacy. Am I clear?

The Leaflet:: So in a way you refuse to comment on the statement that was published by Amar Ujala last month. Right?

Aseem Sawhney: I am not refusing. I am just clarifying that I never gave any such statement. They have either misquoted me or attributed some other lawyers statement to me… Usually my father (AK Sawhney) talks to the media regarding the developments in the case.

Incidentally, his father AK Sawhney — also a prominent lawyer who edits Journey Line — is said to be the main counsel representing the accused in the Pathankot district and sessions court.

The senior Sawhney, ironically, was spokesperson of the PDP and was reportedly expelled from the party way back in 2010 for using “vulgar” language against the then Chief Minister Omar Abdullah. A party inquiry found that he had created indecency during a rally by way of bringing a donkey that had posters of Omar Abdullah with vulgar slogans. He, however, had later claimed that he left the party at his own after finding PDP “anti-Jammu and anti-Hindu”.

Apprehending that the elevation of the junior Sawhney would have far reaching ripple effects in the state, PDP spokesperson Rafi Ahmad Mir said, “His appointment stands in conflict with justice bearing social consequences on the already intimidated tribal population of the Kathua region.”