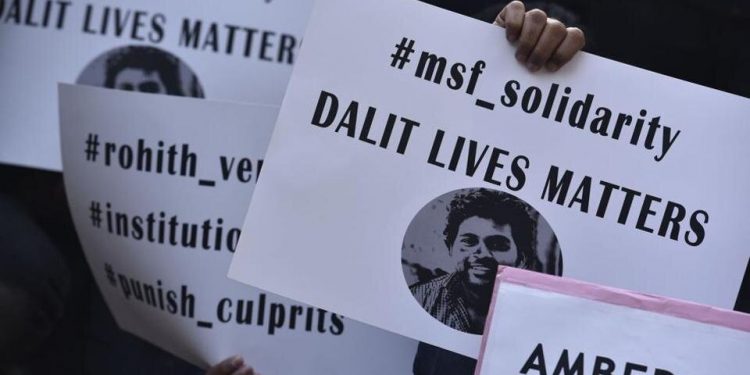 With the spate of caste-based discrimination and violence increasing in educational institutions, ALMAS SHAIKH analyses why the law has not been successful in curbing these attacks. She stresses the need for structural changes to address the rampant casteism prevalent in society.

On November 8, 2021, Deepa P. Mohanan ended her hunger strike after 11 days. This strike was in protest of the caste-based discrimination targeting her, by the director of the International and Inter University Centre for Nanoscience and Nanotechnology (IIUCNN), Nandakumar Kalarickal, which delayed her Ph.D. by over half a decade. Once her demands were met, including the removal of Kalarickal, Mohanan ended her hunger strike.

This instance of fight against institutional casteism is not new; The victory against it is. However, what is necessary to investigate is how the legal system in place did not help Mohanan in fighting the caste-based discrimination.

This piece will explore the legal provisions in place to help eradicate casteism, and analyze whether it has been successfully used and applied.

What does the law say?

The Indian legal system provides protection against caste-based discrimination through four main legislation – the Constitution of India, the Protection of Civil Rights Act, 1955 (PCRA), the Scheduled Castes and Scheduled Tribes (Prevention of Atrocities) Act, 1989 (PoA Act) and its Rules, 1995, and the Prohibition of Employment as a Manual Scavenger and their Rehabilitation Act, 2013.

The Constitution bestows fundamental rights which protect against discrimination by the State. The PCRA protects citizens from the evils of untouchability. As this legislation was not sufficient to protect the Scheduled Castes (SC)/Scheduled Tribes (ST) community from caste-based violence, the PoA Act was brought into force. Similarly, to address the particular vulnerabilities of manual scavengers who belong to SC/ST communities, the PEMSRA was enacted.

This section will analyze the provisions of the Constitution and the PoA Act in understanding the protections offered to SC/ST students at institutes of higher education.

Also read: Scrutinizing the problem of abysmal Muslim representation at National Law Universities: a question of diversity and inclusion

Protection under the PoA Act and the Constitution

In Mohanan’s case, she alleged continuous behavior of a discriminatory nature which included denial of opportunities to use the facilities for her research work, denial of opportunities to conduct project at other institutes, and refusal to process her MPhil degree and transfer certificate within the stipulated time period. All of this, when put together, constitutes the obstruction of a member of an SC/ST community with regard to access to entering and using articles within any educational institution [Section 2(za)(D) of the PoA Act]. This has further impeded her in practicing any profession [Sec 2(za)(E) of the PoA Act].

The rules specify that if any complaint has been filed with the police under the PoA Act, then the investigation should be completed on priority within 60 days, and the report should be submitted to the Superintendent of Police (Rule 7). The rule also stipulates that any delay shall be explained in writing.

Section 14 of the PoA Act states that any case before the trial court should be conducted on a day-to-day basis and completed within 2 months of filing of charge sheet. Further, any appeals to the High Court should be disposed within 3 months (Section 14A).

The Supreme Court of India, in its recent judgment in Hariram Bhambhi vs. Stayanarayanan & Anr. (2021) observed that the atrocities against members of the SCs and STs are not a thing of the past; they continue to be a reality in our society even today. It also recognised that many perpetrators of caste-based atrocities get away scot-free due to shoddy investigations.

The rules specify that if any complaint has been filed with the police under the PoA Act, then the investigation should be completed on priority within 60 days, and the report should be submitted to the Superintendent of Police

It is worth mentioning here that the Mahatma Gandhi University, of which IIUCNN is a nodal research centre, is a state university, having come into existence with the enactment of the Mahatma Gandhi University Act, 1985. Being considered as part of “the State” under Article 12 of the Constitution provided an additional onus of practicing equality, and ensuring non-discrimination under Articles 14 and 15 of the Indian Constitution.

Despite approaching the police, the Kerala SC/ST Commission and Kerala High Court, the protections “guaranteed” under the PoA Act and Rules were not available to Mohanan. It was only through a hunger strike, that Kalarickal got removed.

The PoA Act contains a special provision which states that a person likely to commit any offence under the Act can be removed beyond the limits of such area for a period not exceeding three years (Section 10). This is done upon a complaint or a police report that a person is likely to commit an offence. In addition, the Act gives permission to take preventive action to be taken in areas prone to atrocities (Section 17).

Action could have been taken against Kalarickal as a person likely to commit caste atrocity. In 2015, a report of the enquiry commission constituted by the MG University to probe the matter agreed that Mohanan’s allegations were true. It stated that since she had to face intimidation due to caste, the university should take steps to ensure justice for the student. It further stated that the director failed in providing her with infrastructure and material required for her studies, and recommended the university to take action, “according to university rules”, on this.

Moreover, educational institutions have been consistently identified as sites of caste-based violence. According to the report by the All India Survey of Higher Education in 2019-2020, SC students constitute only 14.7% and ST students, 5.6% of all enrolments in higher education. The gross enrolment ratio for SC students is 23.4% and that for ST students is 18.0%; where the national average in India is 27.1%.

Thus, action could have been taken against both Kalarickal and MG University for the discriminatory treatment meted out to Mohanan, yet no action was taken by the authorities. This shows the need for greater implementation of the PoA Act within each state through its judiciary. The Karnataka High Court has already given substantial orders on the implementation of the Act in its recent judgment in CMASK vs. State of Karnataka & Ors. (2021).

Also read: The Politics Behind Rising Atrocities Against Dalits

Mohanan’s victory: can a new quasi-legal system be carved out?

In spite of the failure of the legal system in stopping this discrimination for over a decade, Mohanan’s successful struggle is rightly seen as a landmark victory.

In institutions of higher education, caste-based violence and discrimination is rampant due to the upper-class upper-caste heteronormative structures in place. Earlier this year, a video became viral of a professor at the Departure of Humanities and Social Sciences at the Indian Institute of Technology (IIT) – Kharagpur, Seema Singh, foul mouthing students and berating the minority students belonging to SC/ST/Other Backward Classes communities.

Thus, action could have been taken against both Kalarickal and MG University for the discriminatory treatment meted out to Mohanan, yet no action was taken by the authorities. This shows the need for greater implementation of the PoA Act within each state through its judiciary.

Previous instances of violence perpetuated by both classmates and teachers has led to instances of violence, which in extreme cases has led to students committing suicide, as was in the cases of Rohith Vemula, Muthukrishnan Jeevantham and Payal Tadvi. In this scenario, the story of Mohanan having gotten her demands met is, sadly, a surprising change.

However, the casteism doesn’t end with students. Even academics are subjected to the same biases, discrimination and lack of transparency in the opportunities available. Vipin P. Veetil’s allegations of caste-based discrimination during his time as an Assistant Professor in the Department of Humanities and Social Sciences at IIT-Madras, and the hunger strike by C. Lakshmanan protesting caste discrimination at the Madras Institute of Developmental Studies showcase not only the rampant casteism but also the casteist structures that keep it in place.

Apart from the legal provisions, there is a need for effective and immediate solutions that can be adopted by universities.

One aspect is mandatory trainings. During the discourse of affirmative action and #blacklivesmatter in the West, academic spaces restrengthened efforts to make academia inclusive for all, by addressing issues of diversity and inclusiveness through mandatory sensitization and training workshops for student and staff. There are no similar caste-based and other diversity sensitization training conducted as a mandatory activity in India. In the absence of such methods, which tend to have a gradual impact on social change, one can only expect ad-hoc and performative actions which do not address the exclusionary structures in place.

Secondly, a strongly functioning or SC/ST cell within the university with representatives from the community is needed. The current structure with the SC/ST cell being constituted of upper caste people reduces the legitimacy and trust of the students towards the mechanism. This cell can work closely with the anti-ragging committees to ensure that caste-based atrocities can be nipped in the bud.

However, these will only provide superficial understanding of caste hegemony in education and academia without stringent and overarching educational sessions. It is necessary to create a safe space where one can question the structures rooted in ensuring that Dalit-Bahujan students experience a sense of otherness.

If after three decades of the existence of the PoA Act, sufficient protection is not being meted out to the intended communities, then there is a need to step back and reevaluate where the blockage is.

Law can be a transformative tool in socio-legal issues, and the increasing reportage of caste-based violence in educational institutions should prove a catalyst for ensuring newer and better ways for dismantling the casteist structures in place.

(Almas Shaikh is a human rights lawyer from India. She is currently reading for a D.Phil. in Law at the University of Oxford. The views expressed are personal.)