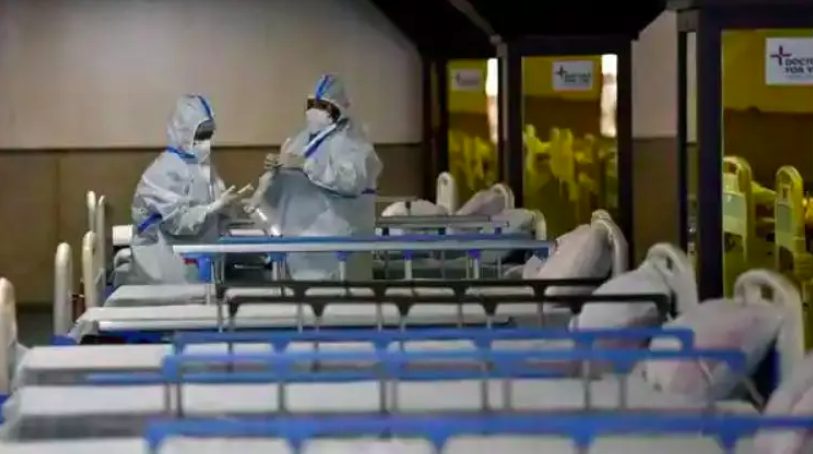 Representational use only. Image Courtesy: Livemint
Access to MedicineCOVID-19GovernancePolicy

India’s COVID-19 disaster continues to unfold, spreading rapidly in its hinterlands. Distressing reports about families struggling to find space to cremate or bury their kin have continued to rush in.

The real extent of the tragedy, albeit missing in the records of the state, is being revealed by local newspapers of different states and journalists making rounds of the severely affected regions. On May 14, Dainik Bhaskar reported that over 2,000 dead bodies were found to be abandoned or hastily buried along the banks of river Ganga in a number of districts in Uttar Pradesh (UP) – Ghaziabad, Kanpur, Unnao, Ghazipur, Kannauj and Ballia regions.

Alongside these reports, experts and international institutions have voiced their fears and published their estimates about under-reporting and undercounting of deaths by authorities. Few days ago, a report by the University of Washington Institute for Health Metrics & Evaluation (IHME) revealed that India may have undercounted its deaths by at least 3.4 lakh. The report also noted that US, Mexico, Brazil and Russia may have undercounted deaths by 4.3 lakh, 4 lakh, 1.9 lakh and 4.8 lakh, respectively. According to IHME estimates, the number of deaths from COVID-19 in India is almost three times as high as reported. The report pegged the actual death toll in Russia to be almost 5.5 times the number reported, arguing that Russia is the worst in terms of reporting.

Dr. Shahid Jameel, virologist and one of the most prominent scientific voices during the pandemic, explained that 4,000 COVID-19 deaths per day (the average number COVID-19 deaths per day in India according to official data) will only comprise an increase of 15% over natural deaths happening in the country. According to him, that kind of small difference would have gone unnoticed at crematorium grounds and burial grounds. For the kind of queues that are being witnessed at crematorium and burial grounds, his estimates suggest an undercounting of deaths by 5-10 times.

He adds, “Even in the best of times, deaths are not registered very well in the country and our registry is weak. But also when the healthcare system gets overwhelmed, people are unable to get a Covid-positive test. There are going to be thousands of cases where tests don’t come in, you don’t count as Covid-positive. Even if somebody who is Covid-positive dies of a heart attack, it would be called a cardiac arrest death rather than a Covid death. So this sort of undercounting is happening all over the country, and that’s why I think the numbers are low.”

The claims of COVID-19 deaths going uncounted are substantiated by ground reports and investigation published local newspapers from the badly hit states of Madhya Pradesh, Gujarat, Bihar and Uttar Pradesh. The numbers coming out of reports from Gujarat are shocking and have invited demands for inquiry.

On May 14, a report published by Gujarati daily Divya Bhaskar claimed that between March 1 and May 10, the state has seen almost 61,000 excess deaths as compared to the same period last year. It was reported that the local bodies had issued 1,23,871 death certificates between March 1 and May 10, as compared to a total of 58,000 certificated issued in the same period last year. This data was based on disclosures by municipal authorities in 33 districts and eight cities. In the same period, the report added, death certificates issued by the 33 districts for COVID-19 fatalities came to 4,218.

While the leader of Opposition from Congress, Paresh Dhanani demanded an inquiry into the alleged under-reporting of COVID-19 deaths, Chief Minister Vijay Rupani said, “The COVID-19 deaths are being recorded as per ICMR guidelines. If a comorbid person dies, there is a committee of experts that decides the primary and secondary causes of death. If it, for instance, finds that the main reason for death was heart attack then such a person may not be counted among the COVID-19 deaths even if he is positive. This system is followed across the country.”

Dr. Chandresh Jardosh, the outgoing president of the Gujarat chapter of Indian Medical Association, argued that the mismatch is a result of the deliberate exclusion of patients with comorbidities from official data. In the month of April, the Gujarat High Court had admonished the state government and remarked that the state had nothing to gain by hiding the real picture. The court added, “Suppression and concealment of accurate data would generate more serious problems including fear, loss of trust, panic among the public at large.”

Towards the end of April, a report published by Article 14 claimed that evidence collected by their reporters from six cities in Gujarat, Uttar Pradesh and Bihar – Patna, Kanpur, Jamnagar, Morbi, Rajkot and Porbandar – revealed that funerals conducted under COVID-19 protocols ranged from three to 30 times higher than the official death tolls. The report emphasised that under-reporting of data is particularly glaring in the smaller towns of Gujarat.

Reports from towns and cities of UP highlight a similar state of affairs. On May 1, a report by Newslaundry highlighted that official data from Meerut district had reported seven times fewer COVID-10 deaths than that revealed by records from crematoria. In mid-April, Hindustan Times reported that the Hindon cremation ground at Ghaziabad, UP, was struggling to cope with the number of bodies even as the district administration had logged just two COVID-19 deaths that month.

As early as April 15, reports of undercounting of COVID-19 deaths had started coming in from Madhya Pradesh (MP). While government data suggested an average of 6,477 cases and 32 deaths per day for the previous week, a report by Hindustan Times reported that on April 13 alone, 47 bodies were cremated according to COVID-19 protocols at Bhadbhada Vishram Ghat, 28 bodies at Subhash Nagar, and nine bodies were buried at Jehangirabad graveyard.

On May 2, another report exposing under-reporting of data from MP emerged. While, the official data pegged the number of COVID-19 deaths from Bhopal district for a month to be 104, managers of two crematoria and a cemetery in Bhopal told PTI that last rites of 2,557 COVID-19 patients from the district were performed in Bhopal last month. Last week, NewsClick had reported that rural Madhya Pradesh finds itself gripped with challenges as patients continued to succumb due to dearth of medical facilities, misdiagnosis and absence of counselling during vaccination drives.

The writer is an author and a Research Associate with Newsclick. The views are personal.