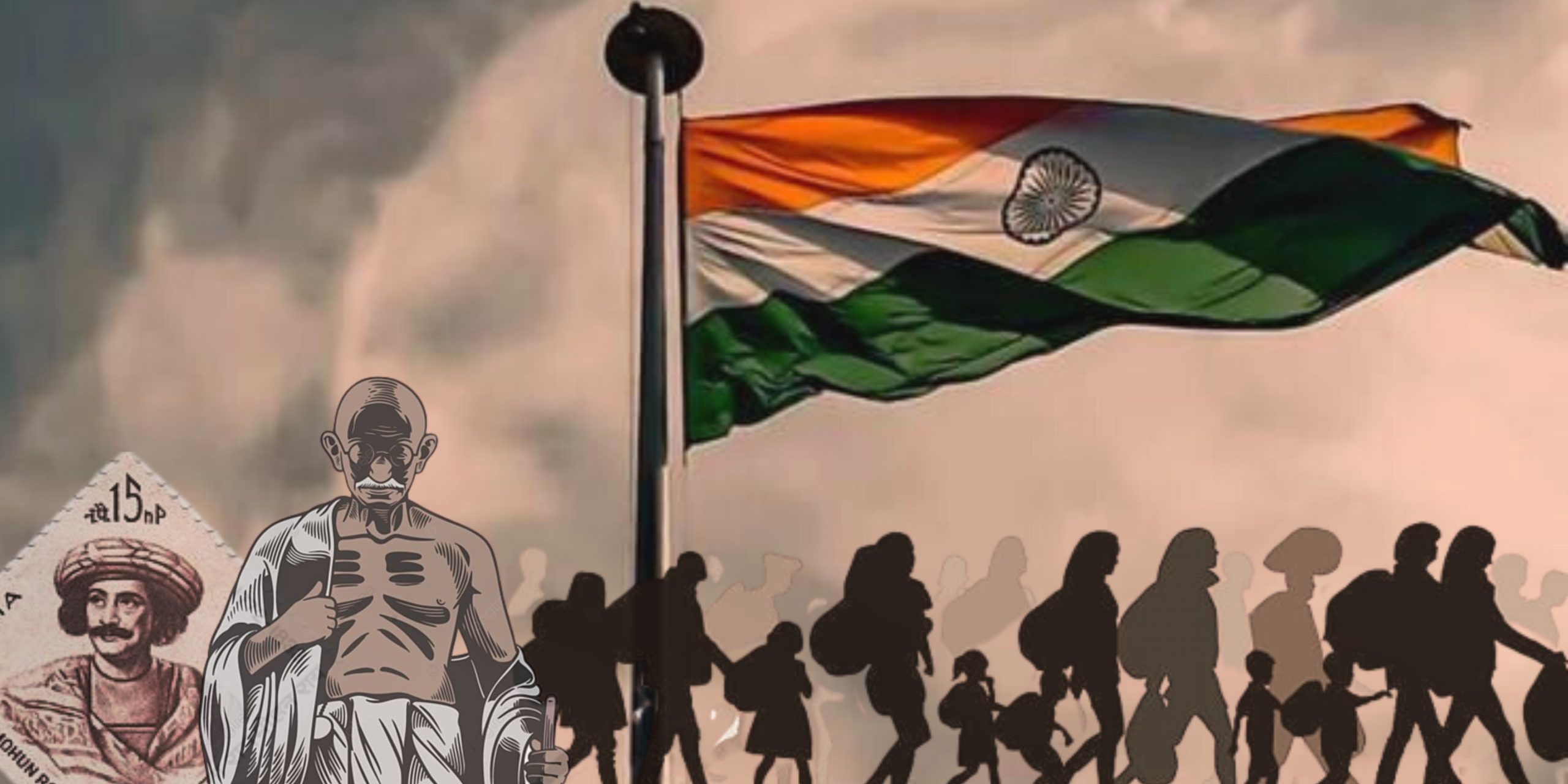 THE Leaflet has been articulating some of our major concerns as a society, and has invited a group of thinkers to bring together a set of writings which could reflect those concerns on the important occasion of our 75th Independence Day.

It is an important day because the Indian national movement, which brought this freedom, was a classic moment of world importance where a nation was conceived in modern times by rejecting some of the basic postulates on which the modern nation was primarily founded in the West.

The idea that a single language or single religion or an ethnic basis on which the nations were to be formed or demanded was not accepted by the intellectuals and the leadership as the foundation of the Indian nation, which was formed in the subcontinent.

An effort to invoke an assemblages of similar and dissimilar people to come together to share a dream of a nation with a wish to create a unique constellation of culturally, socially and linguistically diverse people, to celebrate their diversity in a common political horizon, went through the struggle to remove the colonial power first, and bring in a democratic, secular, republican polity to elevate the social, economic and cultural lives of people to a higher plane. The previous 74 years are the record of that existence with a lot of trials and tribulations.

The pieces which we are bringing together have reflected those trials and tribulations of the independent years where we have succeeded as a people.

On many fronts, however, we have difficult challenges, such as recording the Partition, for example, as historian Prof. Sucheta Mahajan suggests in her piece. The Partition was a catastrophic event and negated the secular thrust of the independent movement. It had, however, powerfully and ideologically been challenged by the Indian political leadership as well as the intelligentsia so as to not let it become the intellectual and ideological template of our body social and body politic.

Nevertheless, colonial and communal historiography and politics has been increasingly at work to place it on the main historical writing template, removing the discussion of colonialism and independence movement from the perspective.

The Independence movement had envisioned the political and social idea of democracy and secularism to be the cornerstone of the future nation, while the federation and parliamentary form of government would provide it a structure. All of these were to see that an economic, social and cultural development of Indian people took place.

Today, as one of our leading economists of international trade, Prof. Biswajit Dhar, tells us in his piece, India, after joining the liberalized trade regime through negotiating different trade agreement and agreeing to become an economically committed to those regimes, is finding itself in a dilemma with a new set of argument for autarchic proposition, that is, Atmanirbhar Bharat.

Policy analyst Dr. Resmi P. Bhaskaran, finds the operation of two processes since the time India adopted the neoliberal reforms hurting the social fabric by removing a moral compass. First, a new language of ‘minimum rights’ has come to primarily legitimize the neoliberal policies restructuring the whole edifice of politico-economic organisation of the society. Second, it has given rise to the moral malaise that has become the signature tune of the neoliberal economies across the world. The malaise is reflected in the complete breakdown of the moral universe, which the liberal thinkers of the market had expected to help sustain the forces of the Market in the absence of the State.

Today, as she cites the experience during the COVID-19 pandemic, it is visible that the rich and poor have begun to spare no thought of well-being for each other. The stranded labourers, during the lockdown period for example, elicited no response from the rich.

The nation also envisioned the well-being of the people by raising the level of their living conditions and creating for them a more humane, cultural world, which could have come through education, modern ways of looking towards themselves and the world.

The spirit of enterprise, the idea of civility, a robust moral confidence and desire for an all-round development is what a civilisational upliftment means. The life of Raja Ram Mohun Roy best reflected such an effort to provide the ideas of a civilised life. Economist Dr. Susmita Dasgupta brings the aspect of that endeavour of his to fight for conditions of that modern civilisation even when the British, at the point definitely building a modern civilisation with industrial revolution at its base, were colonising us. His enterprise and confidence can still provide us the way to challenge forces which dumb us down, civilisationally.

Today, there is vast churning taking place in our cultural and social lives, and historian Dr. Malavika Binny’s paper on the life of this struggle reflected well in the whole episode of Sabarimala. As she poignantly puts it, society is poised at a historical juncture: along with the nation, where forces of change and forces opposing those changes are arraigned at each other, and we are witness to a classic struggle. This struggle is also seeing the efforts to take some of our valuable and rich inheritances away by the processes at work.

Language rights and educational needs are the two most critical areas where these are the most visible. In a very intimate manner, the communal and colonial forces worked together earlier complementing each other. Thus, if the colonial regime, in order to regiment and standardise our languages, did harm and through English further deprived us of a natural growth of the languages, recent forces are furthering those processes by reducing the space of people’s languages by bringing a monolingual idea to become a reality through different ways.

Political scientist Dr. Papia Sengupta makes us aware of how important the language rights have been for the polity and society, and they were sought to be guaranteed in the Constitution itself so as to also preserve our federal and diverse nation.

Similarly, in an important piece, educationist Arvind Sardana, who has an in-depth knowledge of educational policy and matters, indicates how the educational apparatus is being subverted to bring in the processes and ideas which may be inimical to our cultural and social development.

Seventy-five years in the life of a nation may not be very long, but is also not very short. India wanted to carve out a niche as a modern nation through a democratic life. Elections were thought to be the key process which would have given us the form of political life we wanted for the people and for the nation as such.

As economist, and former soldier and administrator, M.G. Devasahayam writes, the electoral democracy that we are in today is gasping for breath and a lot of critical thoughts are required to give it an authentic character as it may have lost them. We need to revive it, along with judiciary, as it is the only source which provides the concrete structures to our best thoughts, our efforts to envision a better life for our people, and retain a moral universe. At a time when the democratic life in the country too is also looking for fresh breath, people for whom the nation was constructed, look towards the judiciary to deliver it from the processes which are inimical.

We are undergoing transitions in our national life. The history of 75 years of independence, and the pace and character of these transitions are critical to understand and reflect upon. Historian Prof. Salil Misra indicates two important transitions, and both are quite closely linked to our nation-making processes and the way the idea of the nation was thought to have been ingrained in our consciousness. It is, therefore, a moment to celebrate and also ponder the way this consciousness was tried to be arrived at in political life.

It is here that Mahatma Gandhi, the father of the nation, tried to show us the way. He fused the social and the political, making social reform and constructive work as part of single movement.  Dr. Alok Bajpai, an eminent scholar of Gandhi, shows us how this had helped in providing people a consciousness of a common struggle for Indian freedom.

Many of these noble ideas were part of the thoughts that went into making the national flag which was adopted with elevated and rich ideas, as lawyer, researcher and writer Arvind Narrain tells us in his paper detailing some of the discussions on the flag itself.

Today, the political formations trying to save democracy see the elections as the only  panacea, relegating the social and culture making work to the background. They are, however, too important to be left to be taken care of by those who may completely lack the spirit of openness, civility and the spirit of enterprise so as to have empathy with struggling people across the country and the world. The spirit of our independence and the vision of our nation have been to ennoble ourselves and listen to the people and their concerns, and learn on our way to civilization so as to deliver ourselves from the darkness that surrounds: tamaso ma jyotirgamaya.

With these thoughts we dedicate this special issue with a bouquet of articles to the reader on this special occasion of our 75th Independence Day.