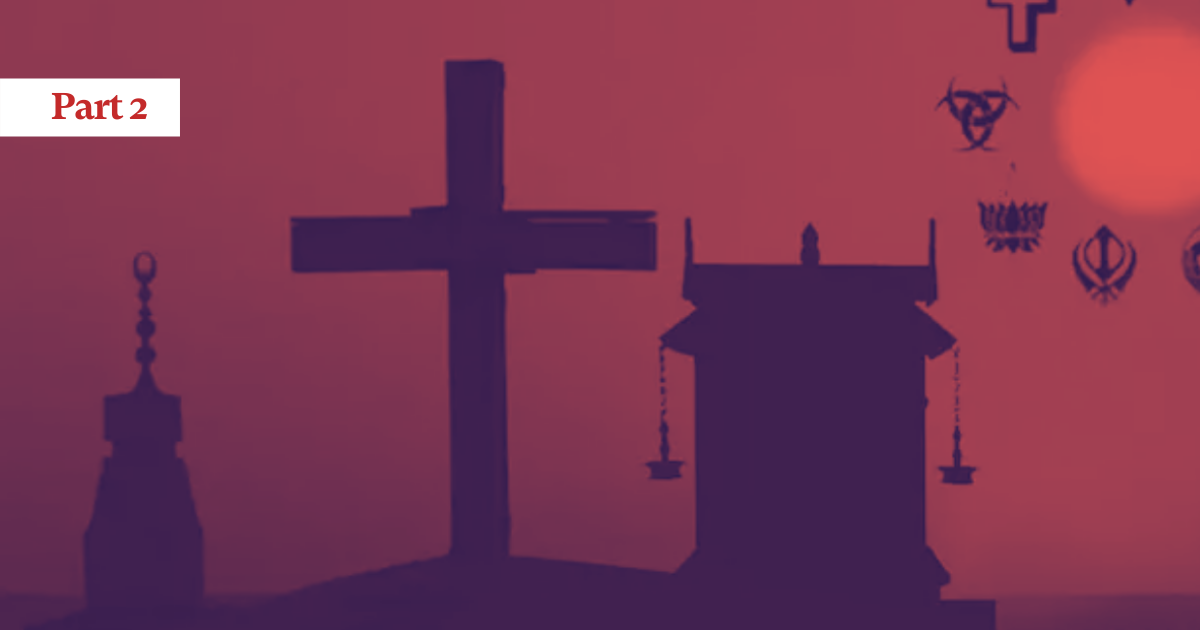 On Thursday, Karnataka became the 10th state in India to implement an anti-conversion statute. The almost simultaneous impetus to these laws in various states does not augur well for the religious minorities, who are already suffering the onslaught of rightwing ascendancy in the political sphere, write SHWETA VELAUDHAN and SHREYAM SHARMA. While Part I of this two-part article focused on Karnataka and Uttar Pradesh, Part II covers the remaining states.

PRIOR to the Karnataka Bill, there have been state-level “freedom of religion” statutes, known as anti-conversion laws, in nine states – Uttar Pradesh, Himachal Pradesh, Gujarat, Chhattisgarh, Odisha, Madhya Pradesh, Arunachal Pradesh, Uttarakhand and Jharkhand. Odisha was the first state to enact such a law in 1967, followed by Madhya Pradesh in 1968.

The law in Arunachal Pradesh has not been implemented due to a lack of subsidiary rules. While Rajasthan has passed an anti-conversion bill, it has not yet received the President’s assent. Other states, such as Manipur, have been considering similar laws. The state of Tamil Nadu previously brought about such a law in 2002, which was subsequently repealed in 2006 because of opposition from minorities.

Case for relook by the Supreme Court

The Odisha Freedom of Religion Act, 1967 (Odisha Act) defines “inducement” to mean the offer of any gift or gratification including the grant of any benefit, pecuniary or otherwise. Whereas, the Madhya Pradesh Dharma Swatantrya Adhiniyam, 1968 (MP Act of 1968) defined “allurement”, to mean temptation in the form of any gift or gratification or grant of material benefit, monetary or otherwise. Both require the previous sanction of a District Magistrate, or an authorised officer, to prosecute for an offence and are identical in terms of other provisions.

According to senior advocate Sanjay Hegde, these laws try to control women, rather than marriage, and assume that the women don’t have any agency of their own.

Both laws were challenged on constitutional grounds. The Odisha Act was held to be ultra vires the Constitution by the High Court of Orissa in 1973. However, this was overturned by the Supreme Court in Rev. Stainislaus vs. State of Madhya Pradesh in 1977.

The Constitution Bench of the Supreme Court in Stainislaus examined whether the right to practice and propagate one’s religion also included the right to convert. Upholding the constitutional validity of the Odisha Act and the MP Act of 1968, the Court held that Article 25 of the Constitution guarantees to all persons, the right to freedom and conscience, and the right freely to profess, practice and propagate religion, subject to public order, morality and health. The Bench further held that “the word ‘propagate’ has been used in Article 25 (1), for what the Article grants is not the right to convert another person to one’s own religion, but to transmit or spread one’s religion by an exposition of its tenets.”

Senior advocate, Sanjay Hegde, in a recent podcast interview with journalist Smita Nair, underlines the need to revisit this judgment because he argues that it is less persuasive. According to Hegde, the state laws against conversion let the mobs have the final say. “If you are born in a religion, you can’t change your religion, without the State’s consent“, says Hegde when asked to comment on these laws. Religious beliefs cannot be forced or regulated, he says. The State is poking its nose, where it is not required, he adds. These laws try to control women, rather than marriage, and assume that the women don’t have any agency of their own, Hegde explains.

The laws and the flaws

In 2021, the MP Act of 1968 was repealed and replaced by The Madhya Pradesh Freedom of Religion Act, 2021. Chattisgarh adopted the MP Act of 1968, in 2000. Thereafter, the Gujarat Freedom of Religion Act, 2003 (the Gujarat Act) came into force. Unlike its predecessors which required prior or subsequent notice for conversion, the Gujarat Act required “prior permission” from the District Magistrate for conversion, by application in a prescribed format. Further, a notice within ten days of the conversion ceremony is required to be given to the District Magistrate (DM).

In 2021, the Gujarat Act was amended to include provisions on conversion by marriage or by getting a person married or by aiding a person to get married. The Gujarat High Court, in its interim order dated August 19 has stayed some of the provisions of the amendment.

Also Read: Analysing the amendments to the Gujarat Freedom of Religion Act in light of the recent High Court stay on certain Sections

The Himachal Pradesh Freedom of Religion Act, 2006 (the HP Act of 2006), modelled on existing anti-conversion statutes, was enacted in 2007. It also used the term “inducement” in place of “allurement”. A notable distinction in the HP Act of 2006 was that any person converted in contravention of the provisions of the statute was “deemed not to have been converted”.

In 2012, the HP High Court set aside Section 4 of the HP Act of 2006 as ultra vires the Constitution and struck down Rules 3 and 5 thereunder, insofar as they related to Section 4. Section 4 read as follows:

Provided that no notice shall be required if a person reverts back to his original religion.

(2) Any person who fails to give prior notice, as required under sub-section (1), shall be punishable with fine which may extend to one thousand rupees.”

The High Court observed that:

In this case, the High Court specifically held that the right to privacy and the right to change the belief of a citizen cannot be taken away under the specious plea that public order may be affected. The High Court observed: “We are unable to comprehend how the issuance of a notice by a convertee will prevent conversions by fraud, force or inducement. In fact, this may open a Pandora’s box and once notice is issued, this may lead to conflicts between rival religious outfits and groups”.

Questioning the Himachal Pradesh Act’s requirement of 30 days’ notice, the High Court asked how the Government would determine when the thought process of a person has changed. It observed: “Change of religion, when it is of its own volition, will normally be a long drawn out process. If a person of his own volition changes his religion, there is no way that one can measure or fix the date on which he has ceased to belong to religion A and converted to religion B. This has to be an ongoing process and therefore, there can be no notice of thirty days as required under the Himachal Pradesh Act”.

However, in 2019, the HP Act of 2006 was repealed and replaced by the Himachal Pradesh Freedom of Religion Act, 2019. The provisions set aside by the HP High Court have been included within the new law passed in 2019. Under the new law, Section 7(4) stipulates that a conversion carried out without following the procedure of advance declaration would be rendered illegal and void.

Citizens for Peace and Justice (CPJ), a Mumbai-based NGO filed a public interest litigation before the Supreme Court in 2020, challenging the validity of the anti-conversion laws in Uttar Pradesh and Uttarakhand. A three-judge bench of the Supreme Court, headed by former Chief Justice S.A. Bobde, along with Justices V. Ramasubramanian and A.S. Bopanna, issued notice to the states, vide its order dated January 6, 2021.

Thereafter, in February 2021, an amendment to the petition was filed by CPJ to also challenge the validity of the new anti-conversion laws passed by Himachal Pradesh and Madhya Pradesh. The amendment petition was allowed by the Supreme Court by its order dated February 17, 2021.

The High Court of Himachal Pradesh observed that “Larger public interest would mean the integrity, unity and sovereignty of the country, the maintenance of public law and order. Merely because the majority view is different, does not mean that the minority view must be silenced”.

In so far as the new law brought about in Himachal Pradesh is concerned, the petition by CPJ submits that the 2019 law added several provisions dealing with “conversion by marriage”, and by sections 7 and 9 reintroduced even more obnoxious and unconstitutional provisions of prior notice, enquiry and investigation than were contained in the struck down provisions of the HP Act of 2006. This is a case of patent legislative overreach and an attempt to legislatively overrule a binding declaration of law by the competent High Court, without removing the unconstitutionality pointed out by the High Court, submits the petition. The new law, in fact, casts a reverse burden of proof upon the person converted and made the offences, including the “offence” of getting married, cognizable and non-cognizable.

The petition, titled Citizens for Peace and Justice vs. State of Uttar Pradesh, is currently pending before the Supreme Court.

A detailed comparison of the ingredients of the laws in eight states is set out in the tables below.

With states vying with one another to restrict conversions through laws, India may well recall what the first Prime Minister, Jawaharlal Nehru had warned, while asking the Congress not to support a Private Member’s Bill to restrict conversions in 1955. Nehru was of the view that attempts to prevent deception and coercion in conversions might well lead to other forms of coercion.

Put in this context, Justice Deepak Gupta’s judgment in Evangelical Fellowship of India assumes significance and reiteration by the other High Courts and by the Supreme Court, as and when the controversial state laws are challenged as violative of the right to privacy and equality, guaranteed by the Constitution.

(Shweta Velayudhan is a labour and employment lawyer based in Delhi and a part of the outreach team at The Leaflet. Shreyam Sharma is a second-year B.A., LL.B. (Hons.) student at the NALSAR University, Hyderabad, who was previously interning with The Leaflet.)