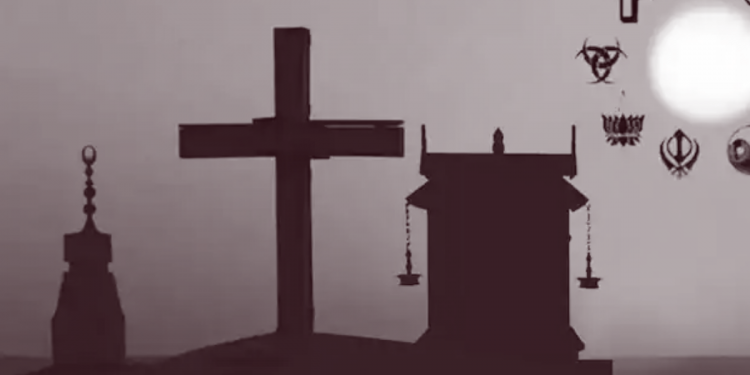 Anatomy of anti-conversion laws: Part I

On Thursday, Karnataka became the 10th state in India to implement an anti-conversion statute. The almost simultaneous impetus to these laws in various states does not augur well for the religious minorities, who are already suffering the onslaught of rightwing ascendancy in the political sphere, write SHWETA VELAUDHAN and SHREYAM SHARMA. Part I of this two-part article focuses on Karnataka and Uttar Pradesh, while Part II – to be published on Saturday – covers the remaining states.

AN anti-conversion law in Karnataka was passed by the state’s Legislative Assembly on Thursday. The Karnataka Protection of Right To Freedom Of Religion Bill, 2021 (the Karnataka Bill) seeks to prohibit “unlawful conversion” in the state.

A coalition of over 40 organisations of minorities, youth, Dalits, women, and human rights organisations, held a protest in Bengaluru on Wednesday, demanding the immediate withdrawal of the Karnataka Bill. On the same day, when the Karnataka Bill was to be debated in the State Assembly, media persons were briefly barred from entering its premises. The debate was eventually postponed to Thursday, when it was passed by a voice vote.

The Law and Parliamentary Affairs Minister J.C. Madhuwamy reportedly said, “At any cost, we want the Bill to be cleared on Thursday since it has to be placed in the Legislative Council on Friday to secure approval.” During a heated debate in the Assembly on Thursday, the Minister denied allegations that the intent behind the Karnataka Bill was to victimise the Christian community, and claimed that it was brought in to protect all religions from illegal conversions, for which the state had data in support of its claims.

Also Read: Can the State Dictate what Religion you will Follow and who you will Marry?

The Karnataka Bill prohibits “unlawful conversion” – i.e., conversion from one religion to another by use of misrepresentation, force, undue influence, coercion, allurement, or by any fraudulent means or by the promise of marriage. Conversion by “allurement” includes temptation in the form of gift, gratification, easy money, material benefit, employment, and free education in a school or college run by a religious body, among other things.

A person who re-converts to his previous religion is, however, exempted from the ambit of an “unlawful conversion”.

A complaint under the Karnataka Bill can be filed by any converted person, his parents, brother, sister, or anyone related to him by blood, marriage or adoption, or in any form associated or a colleague. However, the burden of proof to prove that the religious conversion is not unlawful lies on the person who caused the conversion and any abettor. Offences under the statute are cognisable and non-bailable.

A detailed procedure for conversion is laid down under the Karnataka Bill. A 30-day advance declaration and pre-report before conversion, by the person intending to be converted and the converter performing the ceremony, is to be given to the District Magistrate (DM).

On Wednesday, when the Karnataka Bill was to be debated in the State Legislative Assembly, media persons were briefly barred from entering.

These details would then be notified by the DM on the notice board of the DM office and the Tahsildar’s office, calling for objections. In case of any objections, the DM can conduct an inquiry through officials of the Revenue or the Social Welfare Departments to verify the genuine intention, purpose, and cause of the conversion.

A similar notice has to be provided within thirty days post-conversion, and the converted person has to personally appear before the DM within the next 21 days. Any conversion in contravention of the above procedure is rendered illegal and void, by the Karnataka Bill.
Section 6 of the Karnataka Bill stipulates that any marriage done for the sole purpose of unlawful conversion, or vice-versa, shall be declared null and void by the court, on a petition by either party to the marriage.

Any individual or in case of an institution, the person or persons in charge of affairs therein, in violation of the provisions of the Karnataka Bill, shall be liable to punishment with imprisonment of three to five years, along with a fine of Rs. 25,000. Further, the state government shall not provide any financial aid or grant to such an institution.

Rev. Dr Peter Machado, the Archbishop of Bengaluru, has expressed his concern  the law would become a tool for fringe groups to target Christians.

Several commentators have similarly expressed their concerns that the Karnataka Bill is violative of Article 25 of the Indian Constitution and vitiates the Ambedkarite vision of freedom of choice.

A social activist who was part of the protests against the Karnataka Bill, Tanveer Ahmed, has been quoted to have said that, “The government’s intention is to break the secular fabric of this country and introduce its communal agenda. And this will become their poll plank during the next election. They are making a fool of the majority as well.“

The Karnataka Bill is along the lines of the anti-conversion law passed in Uttar Pradesh in 2020, covered in detail below.

Behind the ordinance and the Act in U.P.

On November 21, 2019, the Adityanath-led Bharatiya Janata Party (BJP) government of Uttar Pradesh (UP) proposed a draft bill to regulate religious conversions and criminalise “forced conversions” in the state. This was accompanied by a report submitted by the UP State Law Commission under its then-chief, Justice Aditya Nath Mittal. The draft bill was proposed with the aim that “conversion done for the sole purpose of marriage be declared null and void”, stressing that the current provisions of the Indian Penal Code are not sufficient to prevent religious conversion.

Thereafter, in October 2020, the UP Government launched Mission Shakti – a campaign focused on the safety and security of women in the state. Within three days of its launch, the state’s prosecution directorate had identified up to 400 cases related to crimes against women and children, for speedy judicial remedy.

Any conversion done without following the procedure laid down under the anti-conversion law, in Karnataka and Uttar Pradesh, is penalised and rendered illegal and void.

Launched on the first day of the Navratri festival in 2020 for an initial span of six months, Mission Shakti has since been renewed for its second and third phases. Reportedly, under the Union Budget for financial year 2021-22, the government allocated Rs. 3,109 crores for the schemes under Mission Shakti.

Soon after the launch of the first phase of Mission Shakti, the Uttar Pradesh Chief Minister Adityanath, during a rally on October 31 last year, announced that the state government would be enacting a law to curb the cases of “love-jihad” in the state.
The Chief Minister can be seen emphatically announcing that “I warn those who conceal identity and play with our sisters’ respect; if you don’t mend your ways, your ‘Ram naam satya’ journey will begin (translated).”
The Chief Minister’s announcement referred to an Allahabad High Court order, delivered in Priyanshi vs. the State of UP on September 23, 2020, wherein the court held that the conversion of religion solely for the purpose of marriage was not a valid conversion.
However, weeks after the CM’s speech, a Division Bench of the Allahabad High Court set aside the order in Priyanshi in its order dated November 11, 2020, passed in Salamat Ansari vs. the State of UP.
Also Read: Allahabad High Court protects 17 interfaith couples’ right to marry
The Uttar Pradesh Prohibition of Unlawful Conversion of Religion Ordinance, 2020 (the Ordinance) was cleared by the State Cabinet on 24 November, 2020 and received the Governor’s assent on 28 November, 2020.
Thereafter, the Uttar Pradesh Prohibition of Unlawful Conversion of Religion Act, 2021 (the UP Act) was passed in February 2021, to replace the Ordinance. The UP Act is effective from November 27, 2020.
The UP Act was passed with minor changes from the Ordinance. Section 3 of the Ordinance originally said, “No person shall convert or attempt to convert, either directly or otherwise, any other person from one religion to another by use misrepresentation, force, or practice of undue influence, coercion, allurement or by any fraudulent means or by marriage nor shall any person abet, convince or conspire such conversion.” However, the UP Act removed the words “or by marriage” in this Section. Instead, an Explanation was added, thus:
“For the purposes of this sub-section conversion by solemnization of marriage or relationship in the nature of marriage on account of factors enumerated in this sub-section shall be deemed included.”
“Conversion” is defined as renouncing one’s religion and adopting another religion. One of the grounds mentioned above, “allurement”, is defined to include temptation in the form of gift, gratification, easy money, material benefit, employment, free education in a school run by a religious body, better lifestyle, divine displeasure, or otherwise.
A re-conversion to immediate previous religion is not deemed to be a conversion under the UP Act.
Any aggrieved person, parents, brother, sister, relatives by blood or adoption can file an FIR of an unlawful conversion. The UP Act places the burden of proof on the people who “caused” or “facilitated” the conversion and not on the individual.
The offences under the UP Act are non-bailable, cognizable, and triable by the Court of Sessions.
Also Read: The Politics of Love Jihad and its Constitutional Validity
A sixty-day advance declaration is to be given signifying the will of the individual for conversion without any force, coercion, or undue influence, to the Additional DM (ADM) or the DM. The convertor shall give one month’s advance notice of conversion of the person to the DM/ADM. The Magistrate can then get an enquiry conducted through the police with regard to the real intention, purpose, and cause of the proposed conversion.
Declaration of conversion to be given within 60 days of the conversion to the ADM/DM. Thereafter, the converted person has to personally appear before the DM within the next 21 days.
Any conversion in contravention of the above procedure shall render the conversion illegal and void.
Any marriage done for the sole purpose of unlawful conversion, or vice-versa, shall be declared null and void by the court, on a petition by either party to the marriage.

Senior advocate Jayna Kothari: UP anti-conversion law is “nothing less than a draconian law” and a “serious violation of the right to equality based on religion”.

According to senior advocate Jayna Kothari, the law is “nothing less than a draconian law” and a “serious violation of the right to equality based on religion”.
Dr N.C. Asthana, retired Indian Police Service officer and former Director General of Police of Kerala, has observed that while other states with anti-conversion laws in place had, perhaps in the garb of modesty, although rather ironically, chosen to name their statutes the “Freedom of Religion Acts”, the UP Law abhors such pretensions.
Apart from the Karnataka Bill and the UP Act, there are currently existing anti-conversion laws, known as “freedom of religion” statutes, in eight states – Himachal Pradesh, Gujarat, Chhattisgarh, Odisha, Madhya Pradesh, Arunachal Pradesh, Uttarakhand and Jharkhand.
Part II of this series examines the provisions of the laws in the remaining states in detail.
(Shweta Velayudhan is a labour and employment lawyer based in Delhi and a part of the outreach team at The Leaflet. Shreyam Sharma is a second-year B.A., LL.B. (Hons.) student at the NALSAR University, Hyderabad, who was previously interning with The Leaflet.)