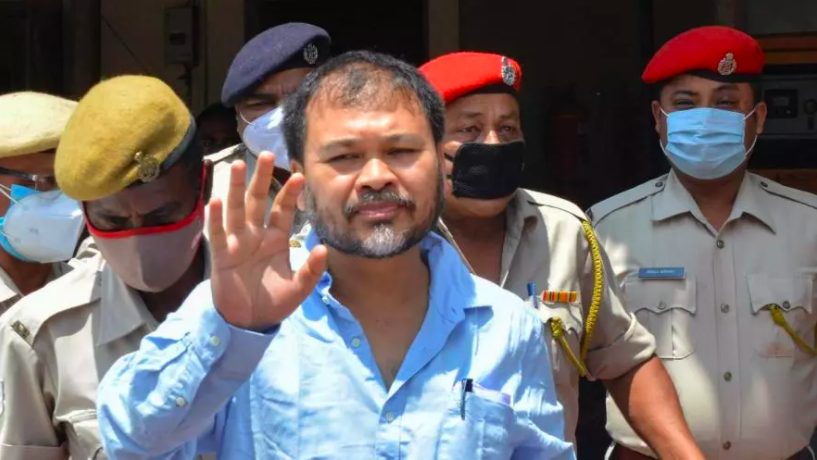 Jailed peasant leader Akhil Gogoi, who was elected this year as an MLA from Sivasagar in Assam, is likely to be released from jail on Thursday as a special NIA court cleared him and his three associates of all charges under the Unlawful Activities Prevention Act (UAPA).

Gogoi and his associates were accused in two cases under the UAPA, 1967, for playing an alleged role in the anti-Citizenship Amendment Act protests that swept Assam in December 2019. He was arrested from Jorhat at the peak of the anti-CAA protests in the state as a “preventive measure” while his associates were taken into custody the next day. When the cases were later handed over to the NIA, UAPA charges were slapped on them.

Earlier this month, Gogoi and his two other associates were cleared of charges in the first case.

Now, with the charges in the second case being cleared as well, Gogoi will finally walk free after one and a half years. Gogoi is likely to be released later on Thursday after the court sends the release order to the jail. His three associates are already out on bail.

NIA Special Judge Pranjal Das did not frame charges against Gogoi and his three associates—Dhairjya Konwar, Manas Konwar and Bitu Sonowal—in the Chandmari case in which they were accused of having Maoist links, the PTI reported.

The NIA was investigating two cases, which were initially registered at Chandmari and Chabua police stations, related to the alleged role of Gogoi and his associates in the anti-CAA protests, which turned violent in the state. Five young men lost their lives as security forces cracked down on protesters.

Gogoi had been denied bail multiple times till February this year. As per the charge-sheet filed by the NIA, he was accused of making assertions prejudicial to national integration. The chrage-sheet accused him of making public speeches that disrupted peace and caused widespread disharmony and disaffection towards the government. He was also accused of having associated with the banned organisation CPI (Maoist).

Nonetheless, Gogoi went on to become the first Assamese to win the state assembly election from prison. On May 21, he was brought to the Assembly in a bus accompanied by 20 security personnel from the Guwahati Medical College and Hospital where he was undergoing treatment.

The 46-year-old activist, who is also heading the newly founded Raijor Dal, has been at odds with the government long before the anti-CAA protests. As the head of Krishak Mukti Sangram Samiti (KMSS), he has been at the forefront of many agitations.

Gogoi had also fought for the land rights of indigenous people in the state and led a state-wide movement against construction of big dams in the ecologically sensitive regions. Over time, dozens of cases have been slapped against him by successive state governments.