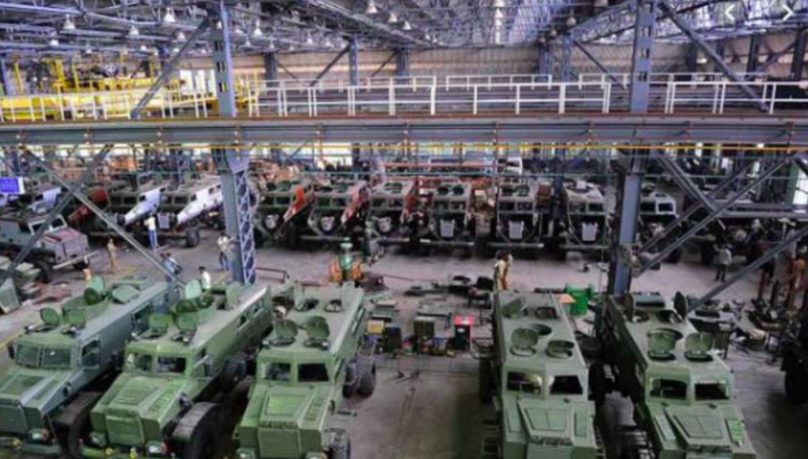 A month after the Bill that empowered the Central Government to prohibit strike actions in essential defence services, was passed in the Parliament, defence employees’ federations seek to continue their battle against the dissolution of the Ordnance Factory Board (OFB) – now, by taking a legal route.

Multiple petitions have been filed by the recognised defence employees’ federations in the past few days both, against The Essential Defence Services (EDS) Bill 2021 and the Narendra Modi – led Government’s decision to corporatise the ordnance factories. Other defence federations too are expected to take the legal recourse in the coming days, Newsclick learnt.

A petition was filed by the All India Defence Employees Federation (AIDEF) in the Madras High Court this week to “restrain” the Centre from implementing its decision of corporatizing the OFB.

Similarly, AIDEF had also moved to the Delhi High Court last month to challenge the EDS Act 2021. The union had demanded a relief from the Delhi High Court, claiming in its writ petition that certain sections of the Act violates the Constitutional provisions.

In June, the Centre had approved a plan to corporatise the 246-year-old OFB, an umbrella body that oversees the 41 ordnance factories across the country. As per the cabinet decision, the board will now be converted into seven new Defence Public Sector Undertakings (DPSUs). Engaged in defence equipment manufacturing, OFB currently operates as a government department under the control of DDP, which is administered by the Ministry of Defence (MoD).

Prompted by the same, the three recognised defence employees federations – AIDEF, Indian National Defence Workers’ Federation (INDWF), and the RSS-affiliated Bharatiya Pratiraksha Mazdoor Sangh (BPMS) had given a call for an indefinite strike in protest.

The Centre, on the other hand, had brought a controversial ordinance to issue an order for prohibiting strikes by employees involved in production of defence equipment, services and operation or maintenance of any industrial establishment connected with the military, as well as those employed in repair and maintenance of defence products. Furthermore, it also allows the penalising of a person who commences a strike that is deemed illegal by the ordinance.

Replacing the ordinance, The EDS Bill 2021 was later introduced and passed in both the houses of Parliament in August during the recently concluded monsoon session. It had invited flak from the trade unions who termed it as “draconian”.

C Srikumar, general secretary, AIDEF told Newsclick on Thursday that the defence federation decided to take every possible route to challenge the government’s move to corporatise the OFB. “We had been doing campaigns and demonstrations since many years now. Last year, we also went on a strike that lasted for about a week. Now we are also approaching the courts to see if any relief can be drawn from there,” he said, adding that hearing on both the petitions is expected to take place by next week.

Srikumar rued that the latest move is in the backdrop of the Centre’s ‘unconstitutional’ decision to penalise those defence workers who choose to go on strike. “The legal route will only strengthen our struggle against the anti-workers policies of the Modi government. Other defence federations like BPMS are also expected to file petitions in the courts in the coming days,” he said.

Newsclick tried but was unable to reach a BPMS union leader to get a confirmation on the same.

Meanwhile, after the latest talks between the Secretary of Defence Production (DP) and the recognised defence federations failed in bringing the latter in confidence with regards to no alteration in the service conditions of the defence employees post the conversion of the OFB into DPSUs, the federations have also decided to conduct a referendum before “deciding on the future course of action.”

A referendum week is to be organised from September 13 to September 18 in which the 76,000 defence employees in ordnance factories across the country will be asked to express their verdict on the corporatisation of the OFB. “The legal battle is no bar to our trade union struggle programmes. But we will only be deciding the future course of action after the referendum,” Srikumar said.

The referendum, Newsclick was told on Thursday, was called by all the defence federations barring the Indian National Trade Union Congress (INTUC) – affiliated INDWF. Breaking ranks with other federations, INDWF had last month shifted its position to extend its support to the corporatisation of OFB.

R Srinivasan, the general secretary of INDWF, told Newsclick on Thursday, that it doesn’t matter whether the union supports the decision to corporatise OFB or not but the Centre won’t listen. “That is why we are now focusing on ensuring that the service conditions of the workers are guaranteed,” he said.