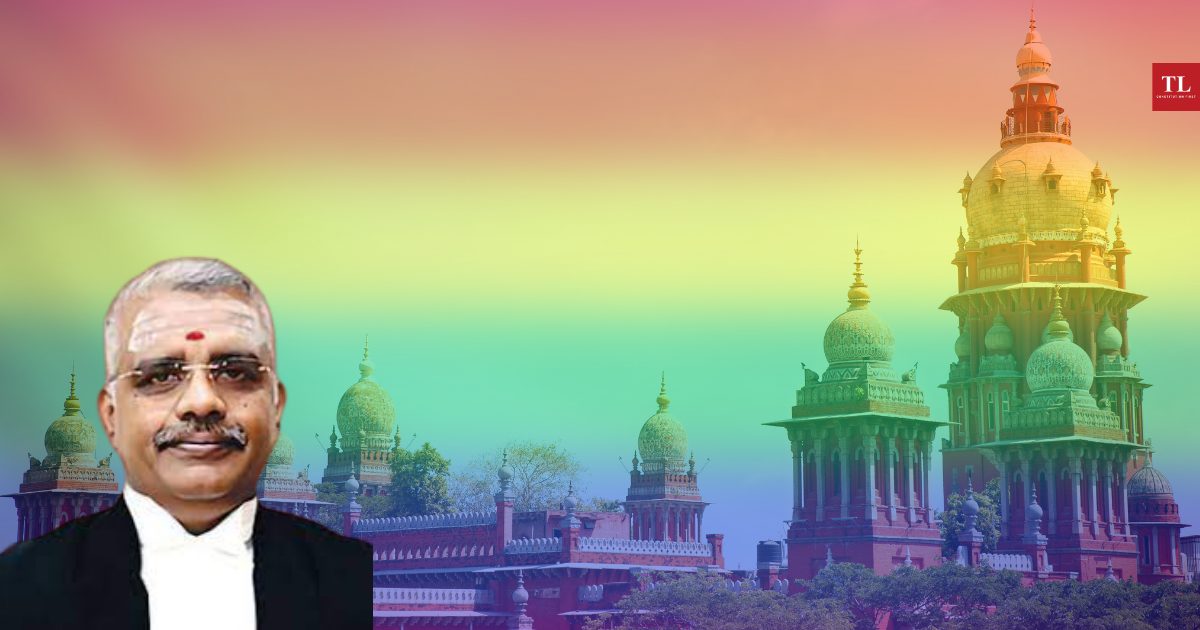 A big thank you for Justice Anand Venkatesh

Justice Anand Venkatesh of the Madras High Court recently declared in the court that, “Ignorance is no justification for normalising any form of discrimination”. He said this in context with a writ petition filed by two lesbian women seeking protection from police harassment. Justice Venkatesh chose to go through counselling sessions with experts to understand issues related to LGBTQIA+ persons. He wanted to do this hoping to have a better understanding of their emotions and issues they face due to prejudices and biases in society. Advocate AJAY KUMAR pens what he felt and what it means to a lot of people when the court shows empathic understanding.

When I was reading the judgement of the High Court at Madras in Sushma & Anr v. Commissioner of Police & Ors (WP 7284 of 2021 Judgement Dated 7 June 2021), I couldn’t believe my eyes. As someone who has had to deal with India’s judiciary on a professional level, I never thought it possible that an institution which is viewed by many as one of the last bastions of the heteropatriarchy could decide to do something such as what Justice N. Anand Venkatesh did in this matter.  (In feminist theory, heteropatriarchy is a socio-political system where cisgender males and heterosexuals have authority over cisgender females and over other sexual orientations and gender identities. It is a term that emphasises that discrimination of women and LGBTQ people has the same sexist social principle.)

It was a busy Wednesday in the office and there was a lot of work to do. We got the update when the news channels reported it. I remember waiting and waiting for the judgement to be uploaded so I too could see how India’s judiciary managed to pull this off.

My school’s library used to have a copy of our Constitution and I remember reading it in class 8. It was perhaps my first tryst with the law. To me, the proposition that the Delhi High Court had held was an obvious one. Our Constitution treated us as equals and people were entitled to equal treatment under the law.

Discriminating against LGBTQI individuals by criminalising their private life was something that to me felt obviously anathema under the Constitution of India. But the Supreme Court disagreed with me clearly in Kaushal’s case. I remember getting yelled at by my boss that day for paying too much attention to this case and not focusing on “billable work” while I wrote an article.

Also read: I too belong to a majority that is yet to comprehend homosexuality, says Justice N Anand Venkatesh; overcomes his prejudices to rule in favour of LGBTQIA+ community

One of my bosses at the time (who shall remain unnamed for lawyers are a litigious bunch) was so spiteful that I took out the time to write about the judgement that he called me at 9:00 pm as I was leaving office, mentioned that if I had enough free time to write about a non-issue, I could also take time out to make amendments to Articles of Association.

I was also scolded by another boss for writing emotionally about the issue instead of presenting a cold legal analysis. I wondered then if I should tell them why I cared so much about this judgement but then, told myself that it is better not to. What would have been the point in doing it anyway?

The Highest Court in the land had just classified people like me as minuscule minorities unworthy of constitutional protection. So I let it go and spent the rest of the night working.

I was at a new employer by the time this judgement came out and the reaction in the office was mixed. While some were openly celebrating, a lot of seniors wondered what effects this judgement would have for “society” at large.

There was almost universal agreement that the criminal prohibition had to go. But social acceptance seemed like a pipe dream at that time, in particular acceptance within the contours of the legal profession.

But perhaps that is exactly why what Mr. Justice Venkatesh did was so remarkable. Here is a judge, of a constitutional court no less, who acknowledges that he needs to understand more about the LGBTQI community before he can sit in judgement over our rights. That acknowledgment itself is half the victory for those of us who campaign for greater freedoms for LGBTQI individuals.

While it is not uncommon for judges to openly remark that they don’t understand something, it is extremely unusual for a judge not to just throw the brief at the counsel and ask them to explain it. Instead, Justice Venkatesh took it upon himself to make an inquiry, and that too a broad inquiry, to listen to stakeholders and challenge his own biases. Maybe this may happen in private many times, but to do so in front of the public shows an element of probity and commitment to the cause of justice that exemplifies our constitution.

While the Supreme Court in Navtej Singh Johar pronounced that people like me aren’t criminals, I will forever be grateful to Justice Venkatesh for being the first judge who recognised that LGBTQI individuals are people. Real people, with real lives and real feelings.

There will be much written about the impact those guidelines issued will have. Perhaps we will not be able to truly discern how path-breaking this judgement is for many years from now. But I wanted to take time out, of another busy day, to minute my appreciation of Justice Venkatesh. On an ordinary day, I would have cribbed like always, about irregular procedures and the expansive role taken by constitutional courts. But not today. Thank you Justice Venkatesh for making me and millions of people like me, feel like we belong to this society and that this society acknowledges our existence.

(Ajay Kumar is an Advocate practicing at the High Court at Bombay. His practice areas include commercial civil disputes, white-collar criminal litigation, and arbitration. He identifies as non-binary. Views expressed are personal.)