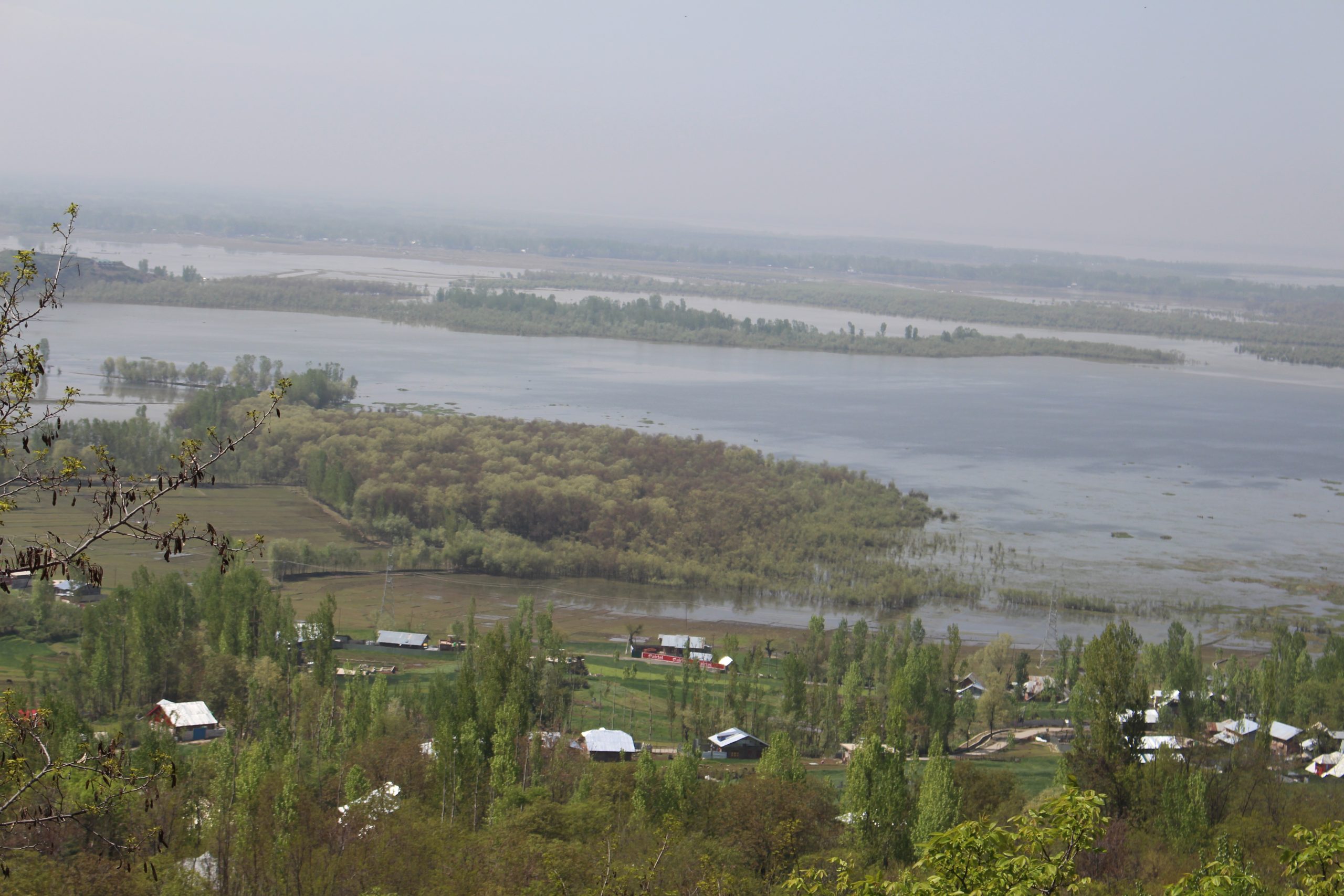 Why Are Kashmir Wetlands Drowning in Waste?

Last August, a three-member bench of the National Green Tribunal headed by Chairperson Justice AK Goel ordered the prominent wetlands of Kashmir should be preserved. The bench said the conservation of wetlands in general and RAMSAR sites in particular, is a significant aspect of the protection of the environment. Seven months have passed, but still, nothing has moved on the ground, RAJA MUZAFFAR BHAT writes from Kashmir.

DESPITE repeated requests, the government of Kashmir took no steps to preserve the Wular, Hokersar, and Kreentchu Chandhara wetlands in the Valley. Left with no choice, this author then petitioned the National Green Tribunal to pass suitable directions. These wetlands are either being used as garbage dumpsites or have been encroached by vested interests including the land mafia. Ironically, some municipal institutions, in violation of the Municipal Solid Waste (MSW) Rules, 2016 are themselves dumping garbage in Kashmir’s wetlands.

Notably, the Wular and Hokersar are RAMSAR sites, or have been declared wetland as per the international treaty to protect such regions. Therefore, on 27 August, the Green Tribunal passed an order to protect these precious ecosystems. “To give effect to the Sustainable Development and Precautionary Principles, which have been held to be part of right to life and are to be statutorily enforced by this tribunal…effective action plan and its execution is imperative. One of the serious challenges is solid and liquid waste management, apart from encroachments,” the NGT said.

The order says there are binding directions of the Supreme Court in Almitra H. Patel vs Union of India and Ors, and Paryavaran Suraksha vs Union of India on the scientific management of solid waste and sewage/effluents. These are based on the statutory provisions of the Water (Prevention and Control of Pollution) Act, 1974, Air (Prevention and Control of Pollution) Act, 1981, and waste management rules framed under the Environment (Protection) Act, 1986.

The NGT bench commented on the widespread non-compliance with the laws. It said that there was a similar situation in the rivers as well, which is why it is considering several petitions related to river pollution as well.

“Apart from the said issue, large-scale failure has been found in the matter of solid waste management…The Chief Secretaries of all the States/UTs were required to remain present…before this tribunal for interaction and further planning…” the tribunal held.

In a 2015 petition, Lt Col (Retd) Sarvadaman Singh Oberoi vs Union of India and Others, the Green Tribunal considered the restoration of water bodies. In another application, Paryavaran Suraksha Samiti and Another vs Union of India and Others, the discharge of untreated sewage or effluent into water bodies was considered. Several other matters on coastal pollution, pollution of industrial clusters, etc are pending before the tribunal.

Suggestions made before NGT

The Wildlife Conservation Department was reluctant to take up the job of clearing the wetlands of plastic and other solid wastes. Therefore, I suggested to the tribunal that the Rural Sanitation Department in Jammu and Kashmir, which also acts as the mission directorate for Swachh Bharat Mission Gramin (SBM-G) should take up the solid waste management work in and around the wetlands of Kashmir.

In the case of the Wular lake, the Rural Sanitation Department can work with the Wular Conservation and Management Authority (WUCMA) an institution established in 2012 by the government of Jammu and Kashmir. WUCMA administers the affairs of Wular lake and its associated marshes. It is supposed to protect the lake ecosystem and the catchments that drain into it directly.

The Green Tribunal forwarded my suggestions to the Jammu and Kashmir government. A detailed advisory was sent to the Divisional Commissioner Kashmir by NGT.

When law enforcers turn violators, what can be expected of citizens? The municipal institutions are supposed to enforce the Municipal Solid Waste (MSW) Rules, 2016, but they are themselves engaged in criminal acts of dumping solid waste in wetland areas and on the banks of lakes.

The Municipal Council of Bandipora in North Kashmir has been dumping waste on the banks of the Wular lake near Zalman village for 15 years. This was also highlighted in the petition before NGT, which sought a report from the government.

The Municipal Council Bandipora provided incorrect and misleading information to the NGT. It said that its trash-collection vehicles were not dumping municipal solid waste near Wular. The written response of the Bandipora municipality is based on false statements as the residents and even a municipal councilor of Zalwan area) had written to the NGT Chairperson about unscientific dumping of solid waste near Wular.

I produced that written communication at the tribunal, along with a detailed counter-response. One more municipal institution, the Municipal Committee of Hajin, dumps its solid waste near the Gandbal area, which is part of the southern shore of the Wular wetland. I brought this matter also into the notice of the NGT.

When law enforcers turn violators, what can be expected of citizens? The municipal institutions are supposed to enforce the Municipal Solid Waste (MSW) Rules, 2016, but they are themselves engaged in criminal acts of dumping solid waste in wetland areas and on the banks of lakes.

For six years, the Directorate of Urban Local Bodies (ULB) has been unable to manage the waste of small towns.

This shows how incompetent and irresponsible they are towards waste management. One of the wetlands used by the Sopore Municipal Council at Ninglee was closed on the orders of the Jammu and Kashmir High Court last year in October.

Former Chief Justice of Jammu and Kashmir High Court Geeta Mittal had visited the site and ordered its closure. Another site at Darnambal area was identified by the district administration of Baramulla, which locals say is within 200 meters of the Wular catchment area.

Action by the government

The NGT order seems to have no takers on the ground even though the Divisional Commissioner, Kashmir, PK Pole, has held several meetings on it with the concerned Deputy Commissioners, wildlife officers, and other stakeholders such as the Director of Urban Local Bodies and the Department of Rural Sanitation.

After more than seven months, I can see that no work has been done and these wetlands continue to be filled with plastic and other solid and liquid waste. The Divisional Commissioner has on several occasions directed the Deputy Commissioners of Srinagar, Budgam, and Bandipora to take preventive measures to conserve the water bodies.

The Wildlife Conservation Department, which manages some of the wetlands of Kashmir, also was directed to work in close coordination with the Rural Sanitation Department but nothing has happened on the ground 200 meters outside. The Divisional Commissioner Kashmir had also held a meeting last July regarding using Swachh Bharat Mission Gramin funds for wetland conservation.

After more than seven months, I can see that no work has been done. These wetlands continue to be filled with plastic and other solid and liquid waste. The Divisional Commissioner has on several occasions directed the Deputy Commissioners of Srinagar, Budgam, and Bandipora to take preventive measures to conserve the water bodies.

He had directed the Deputy Commissioners and some heads of departments of the concerned government agencies to ensure strict compliance with the Municipal Solid Waste Rules 2016 and the Wetland Conservation and Management Rules, 2017.

In a notification dated 26 September 2017, the Union Ministry of Environment, Forest and Climate Change (MoEFCC) had issued the Wetlands (Conservation and Management) Rules for the integrated management of wetlands.

We are still unclear when this authority will start operating on the ground. The State Wetlands Authority is a statutory body meant to function as the state’s nodal agency for policy development and to create the regulatory framework for integrated management and planning, and to implement action plans, ensure capacity-building, conduct research, networking, communication, awareness, and raise funds for wetland management.

It is supposed to prepare a list of all wetlands in the state, list those that are to be notified, recommend identified wetlands for regulation, and prepare a comprehensive digital inventory of all wetlands within a year after the rules are published. It is also supposed to upload these details on a dedicated web portal to be developed by the central government. The inventory of wetlands is meant to be updated every decade.

The State Wetland Authority is also supposed to prepare a comprehensive list of activities that are to be regulated and permitted within the notified wetlands and their zones of influence. It can recommend additions to the list of prohibited activities for specific wetlands and issue directions for the conservation and sustainable management of wetlands.

Not just the Green Tribunal, even orders of the Jammu and Kashmir High Court to protect rivers and water-bodies are disrespected in Jammu and Kashmir. I have been following two Public Interest Litigations on waste management and conservation of the Doodh Ganga river.

Directions of the National Green Tribunal to protect Jammu and Kashmir wetlands have no takers. The government itself is violating the Wetlands Conservation and Management Rules, 2017. The Wildlife Conservation Department and Rural Sanitation Department have failed to coordinate their activities, as desired by the NGT.

Government officials constantly provide misleading information to the High Court. The courts cannot investigate every case as a result of which people continue to suffer. Although money is available under the Swachh Bharat Mission Gramin for rural waste management, and it can be used for wetland cleaning as well, yet these funds are not even requisitioned. Even the Detailed Project Reports are not prepared at the district level.

I have learned of these huge lapses through an RTI request, and am unable to understand why the government did not even think of constituting a State Wetlands Authority under the Wetland Conservation and Management Rules 2017.

(Raja Muzaffar Bhat is a Srinagar-based activist, columnist, and independent researcher. He is an Acumen India fellow. The views are personal.)