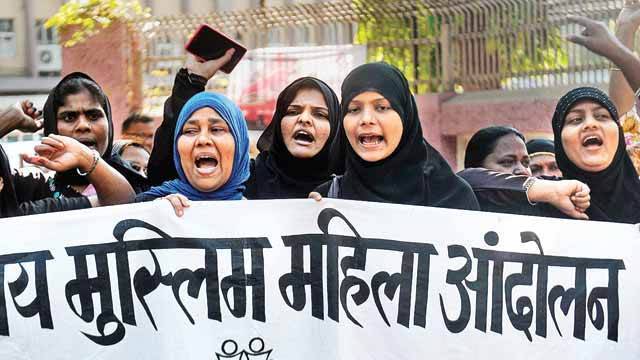 The Bhartiya Muslim Mahila Andolan fought a strenuous battle against Triple Talaq in face of opposition from not only Muslim orthodoxy but also a certain section of feminists. Author SCHARADA DUBEY narrates her interactions with Noorjehan Safia Niaz, who she calls a ‘Conscious Campaigner’, in her book ‘M for Minority’. Excerpts:

“FEMINISTS tell us – you must choose the Constitution, not the Quran. The Mulla gang tells us – it is the Quran and only the Quran. We say, ‘No, we want both.’ Don’t create these artificial binaries and hierarchies. We are Muslim women Indian citizens, and we will have, rather we are, all of it – the Quran, the Constitution, even the UN Charter.  Once we had seen for ourselves that there were no contradictions, it brought a lot of clarity, it gave us a lot of strength,” said Noorjehan.

An important initiative was going to emerge from this clarity. As they studied and discussed these points further, the Bhartiya Muslim Mahila Andolan (BMMM) team asked aloud – Why should women not be Qazis? Why should we not have our own auraton ki sharia adalat (women’s sharia court) where both women and men could get justice?  Under all these questions, however, was the most important one: Who will codify the law?

“No one else was going to do it for us. We would have to do it ourselves,” said Noorjehan.

As if echoing my thoughts, Noorjehan said, “We are citizens. We had raised the demand in 2007, in 2014, will raise it in 2019 and Inshallah whenever necessary in the future. Our slogan is ‘Jiski ladaai, uski agvaai’ (Whoever struggles, leads). We have the right to speak because we are victims.”

“So, from 2008 to 2014 we had multiple consultations for drafting our laws. We talked to ordinary women, lawyers, activists. Then we did a survey of 5000 women asking them – what is it that you want? 92% said they did not want unilateral divorce. 91% said they did not want polygamy. We collected thousands of signatures. In the process of consultation where we met thousands of women in many cities, I remember a poor, marginalized woman telling us in Bhopal – men should get married at 25, and for women the age should be at least 21 or 22, giving them time to graduate. This is what the bearded elders of our community who are stuck in a time warp fail to see – these aspirational women. But the women and what they expressed to us is what drove us forward. The Maulanas could not challenge us on the Quran. Even if 4 of them come together, they will not be able to defend triple talaq,” she said. “The criticism I have heard at their public meetings is that the Triple Talaq Bill (TT Bill) is actually an infringement of the cultural rights of Muslims as guaranteed by Article 25 of the Constitution, and it is a clear attempt by the BJP to meddle in the personal lives of Muslims to further cause divisions within the community,” I said.

“Those are very convenient arguments for them, for the moment,” said Noorjehan. She adds, “See, under the British, there was a Sharia Application Act, because the Maulanas had approached the British asking for Sharia to be applied and women to be given their share of property which was earlier held indivisible. In 1939 the Dissolution of Muslim Marriage Act was passed because a lot of Muslim women were converting to escape bad marriages. Bringing this law was to enable women to approach the courts for divorce. At that time, it was the Maulanas only who had approached the government.”

Aap jao to zaatiya haq ke khilaf nahin hai, auratein jaayein to…? Aur woh bhi Quran ke aadhaar par. Phir yeh sarkari interference kahan ho gaya? (When you approach the government, it is not a contravention of cultural or personal rights, and when women go, then? That too, when they are going based on an understanding of the Quran. Then why talk of government interference?)”

In fact, why go so far back? In 1986, who approached the Rajiv Gandhi government against the SC judgement in the Shah Bano case? Again, it was the mullahs.

Aap jao to zaatiya haq ke khilaf nahin hai, auratein jaayein to…? Aur woh bhi Quran ke aadhaar par. Phir yeh sarkari interference kahan ho gaya? (When you approach the government, it is not a contravention of cultural or personal rights, and when women go, then? That too, when they are going based on an understanding of the Quran. Then why talk of government interference?)”

“So you are saying this is more of an ego problem between the All India Muslim Personal Law Board (AIMPLB) and the BJP than a clear idea of justice and protecting the rights of Muslim women,” I said.

“In fact, I would say it is an ego problem not just for the AIMPLB, but for the feminists also,” said Noorjehan.

“Tell me, which part of personal laws are not liable for criminal action? Section 494 of the IPC makes bigamy a non-cognizable offence punishable with a 7-year jail term. This is applicable to Hindus. Section 125 of the CrPC makes non payment of maintenance an offence punishable with jail. There are similar provisions for child marriage, domestic violence and other personal issues. When all personal law violations are already inviting criminal action, then when a Muslim man commits a violation, why should he not be liable?” she added.

I was replaying in my mind the impassioned speeches I had heard about the TT BIll being used to further victimize Muslim men. They sounded less convincing at this particular moment than when I had heard them.

“See, when a Muslim man divorces his wife on a whim, it is worse than the desertion that many Hindu women go through. After desertion, a woman can still continue to stay at her house, her marriage is intact, she can claim property. But when he divorces her like this, the marriage is over. So when a leading leftist feminist opposes our work on the basis of the criminalization of Muslim men, doesn’t she understand the difference between divorce and desertion? A deserted woman does not have to approach the courts for maintenance, she still has family, other recourse,” said Noorjehan.

BMMA has been involved with the process of introducing the Triple Talaq Bill in parliament. This has meant that they are making attempts to improve it wherever possible.

“When the Bill fell through in the Lok Sabha, it was sent to us and we gave our inputs. The amended Bill has those corrections. One, that the offence is bailable. Two that arrest can happen only on the complaint of the wife. A third amendment, that we had not asked for, but they provided, was that it is compoundable before a magistrate, that is, reconciliation is possible. With all these, the Bill has still not made it in the Rajya Sabha,” said Noorjehan. We were talking in 2018.

The Triple Talaq Bill or The Muslim Women (Protection of Rights on Marriage) Bill 2019 received President Ram Nath Kovind’s assent on July 31, 2019 after passing through the Rajya Sabha and has become law since then.

Noorjehan leaned forward and asked me earnestly, “You know that a woman does not run to the police station the first day she has a problem with her husband?”

“Neither are police stations, understaffed and overworked, just waiting to arrest Muslim husbands. This talk of arrest and criminalization actually ignores the actual plight of so many women. Also, we know the Bill is not a perfect draft. No law is – it can be changed and improved upon with time. The Hindu Code Bill itself is an example – it is not the same today as the law which came in 1955. So this is at least a start for Muslim women. For the first time in 70 years, the rights of Muslim women are being sought to be protected by codified law. After this, we can begin to look at other issues – domestic violence, halala, polygamy – but at least a start has been made,” she explained.

Most of the criticism of the BJP government’s portrayal of the Triple Talaq Bill as their championing the cause of Muslims, particularly Muslim women, is about how the issue of Triple Talaq and the Bill has been used to portray Muslim men as oppressive and boorish.

Noorjehan conceded the possibility that this has indeed happened.

We have to work with the government of the day. We may be on politically difficult ground, but we don’t have a choice. Muslim women’s issues have to be taken up, regardless of which party is in power

“We know that the issue has been used against the minority community by the BJP government. Look at us, we are all victims, survivors of communal riots, we know what they are capable of. But our struggle on this and other issues did not begin now. Our work in the community began in 1995. We began pushing for codification in 2007. I have personally interacted with so many women’s groups, and the government in 2007. If today we have the draft and the provisions of the Bill going forward, it is because of the work we have put into it. We cannot neglect the interests of thousands of women waiting for a day when a government of our liking will come into power. We have to work with the government of the day. We may be on politically difficult ground, but we don’t have a choice. Muslim women’s issues have to be taken up, regardless of which party is in power,” she said.

This is a voice not from the rarefied confines of a sheltered home or campus, but from a place offering hope and sustenance to hundreds of women daily. In some very visceral way, it also reinforced my idea of what a citizen must do – make the government of the day more responsive and responsible to its people.

As if echoing my thoughts, Noorjehan said, “We are citizens. We had raised the demand in 2007, in 2014, will raise it in 2019 and Inshallah whenever necessary in the future. Our slogan is ‘Jiski ladaai, uski agvaai’ (Whoever struggles, leads). We have the right to speak because we are victims.”

Liberals and liberalism of all shades had to be re-examined in these difficult times, I suggested. She agreed, saying, “Of course the BJP government is responsible for the wave of communal hatred that has resulted in lynchings of Muslims. But earlier governments too, have had such large-scale atrocities under them, weren’t they responsible? Muzaffarnagar, Babri Masjid demolition, so many communal riots in so many decades…”

“All parties and organizations that went around with holy labels have had their sheen removed,” I agreed, marking an end to another phase of our conversation.

(Scharada Dubey is the author of several book including Bol Bam: Approaches to Shiva and Portraits from Ayodhya: Living India’s Contradictions. The views are personal.)