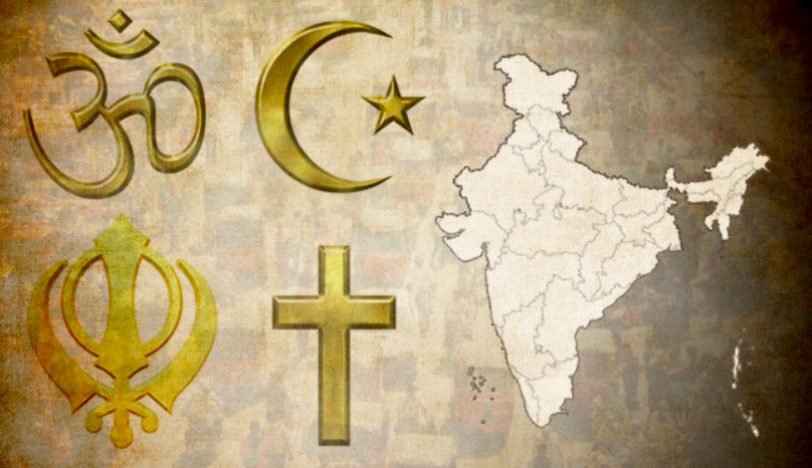 Representational use only.
Civil SocietyReligion

Understanding the Role of Religion in Indian Public Life

Last week, the Pew Research Centre, New York, released a novel survey about the role of religion in Indian public life. The report, Religion in India: Tolerance and Segregation, provides some perspectives on the changing role of religion and the place for secularism in the country. In the context of the rise of right-wing politics, this report can provide a new frame of reference on perceptions about social relations and help examine what space remains for alternatives to it.

Among its many findings is the observation that 66% of Hindus see themselves as very different from Muslims, a sentiment that most—64%—of Muslims, echo. It concludes that Indians “simultaneously express enthusiasm for religious tolerance and a consistent preference for keeping their religious communities in segregated spheres—they live together separately”.

These two sentiments may seem paradoxical, but for many Indians, they are not. While Indians respect diversity, they also value difference in a way that segregates identities. It is important to note that this is the dominant ethos across religious communities. Segregation, here, refers to avoiding common neighbourhoods and resisting inter-religious marriages. It seems like Indians find it challenging to separate legitimate anxieties about recognition from popular prejudices. At least some part of prejudice is integral to how communities construct and self-represent themselves; and this is where right-wing politics comes in, with attempts to exaggerate anxieties over differences and undermine the acknowledgement of diversity.

In the survey, the majority of those surveyed felt that diversity is beneficial to India. It records that nearly two-thirds (65%) of Hindus who voted for the BJP in 2019 felt that being Hindu and speaking Hindi are crucial to be truly Indian. This cohort also felt that religious diversity benefits India, compared with about half (47%) of other Hindus, who voted for non-BJP parties in 2019, and who do not think India benefits from diversity.

Many of the campaigns of the Right, be it “ghar wapasi”, “love jihad”, “forced conversions” or “anti-Romeo squads” are meant to appeal to this underlying conflation of being Hindu and Indian that prevails among the Hindu community. However, the secular formations undermine this paradoxical mode of making sense of community identities using counter-campaigns based on the false notion of “Islamophobia”. (As I wrote earlier, when majoritarian mobilisation is making a claim to a phobia, merely reiterating that ‘there is Islamophobia’ makes very little sense to the majority community). Such campaigns are singularly unhelpful in making sense of the continuum between diversity and difference on the one hand and recognition and prejudice on the other.

It is imperative to locate and identify the fact that many of these sentiments cut across religious communities. The resistance to inter-religious marriages also has to be understood in connection with the case that BR Ambedkar made for inter-caste marriages as the way to annihilate caste differences. How do inter-religious differences exist alongside the more amicable understanding that communities can coexist without posing a cultural or demographic threat to each other (unlike Yogi Adityanath’s speech that two different religious communities—“samuday”—cannot coexist). Would individual choice and a neutral approach to the question of inter-religious marriages settle the problem of ethics and anxieties involved in such a question, especially when they have become the focus of deliberate campaigns of the Indian Right?

Critical philosopher Richard Rorty has argued that until the 1960s, the focus of progressives was more on the “elimination of prejudice” rather than celebrating “cultural recognition”. The undue emphasis on “politics of differences” and valorising identities to claim recognition has proved unhelpful in undermining prejudices. He suggests we should, instead, focus on encouraging the simpler idea of a “common humanity” that highlights commonalities, where all communities are seen to have similar basic needs and suffer humiliation and insult in the same way. The earlier secular ethos in India encouraged such a notion, such as through Bollywood productions which showed that, when hurt, everyone bleeds, and the colour of their blood is the same.

The Pew survey finds that Hindus tend to see their religious identity and Indian national identity as closely intertwined: Nearly two-thirds of Hindus (64%) say it is “very important” to be Hindu to be “truly” Indian. It finds that “for many Hindus, there is no contradiction between valuing religious diversity (at least in principle) and feeling that Hindus are somehow more authentically Indian than fellow citizens who follow other religions”.

It could well be that this is a result of persistent right-wing campaigns on nationalism, which have changed the popular idea of who is a nationalist. Intriguingly, the survey points towards people conflating “a Hindu way of life” with the idea of India, which raises the question whether the idea of India itself acknowledges diversity as an inherent principle in social life? Here, being Hindu is being imagined more as a social and cultural rather than religious identity. It is a point the RSS chief has made in recent public speeches and which even the Supreme Court has alluded to in some judgements. But the question is how would one, in concrete terms, separate the religious from the social? How would one guarantee it does not continue to be hegemonic? Or is this shift a way to accommodate the modern sensibility of diversity—while in the concrete pursuing a majoritarian agenda?

In the context of Indian Muslims, the report notes, “Today, India’s Muslims almost unanimously say they are very proud to be Indian (95%) and express great enthusiasm for Indian culture: 85% agree with the statement that Indian people are not perfect, but Indian culture is superior to others.” This certainly points to the underlying commonality of ethics that cuts across religious communities, whether one is Hindu or Muslim. For instance, the report observes, “Muslims in India are just as likely as Hindus to say they believe in karma (77% each) and 54% of Indian Christians share this view.” One could, perhaps, add caste as the indigenous contribution to Islam and Christianity. It also, perhaps, emphasises the trust Muslims continue to have in Indian democracy and public reasoning, as evidenced by their unfailing participation in elections and faith the community puts in the legal system despite all its limitations. Prime Minister Narendra Modi himself said that there is no homegrown terrorism in India, and most of it gets exported to India from across the border. That is, a sense of belonging reflects in the shared cultural beliefs (such as theory of karma) of Hindus and Muslims and the active participation of the latter in electoral processes.

To conclude, one could argue that the Indian Right understands the continuities that overlay the underlying segregation in the society and is attempting to produce hierarchical solidarities with polarised differences. Meanwhile, the secular-progressives emphasise secular solidarity but through a binary discourse that cannot address a social reality in which continuities and commonalities exist alongside segregation and prejudice. The future may well require a more dialectical approach: acknowledging that prejudices—as well as the possibility of solidarity—exist across communities, without always equating culture with tradition or conservatism.

The writer is Associate Professor at the Centre for Political Studies in Jawaharlal Nehru University, Delhi. The views are personal.