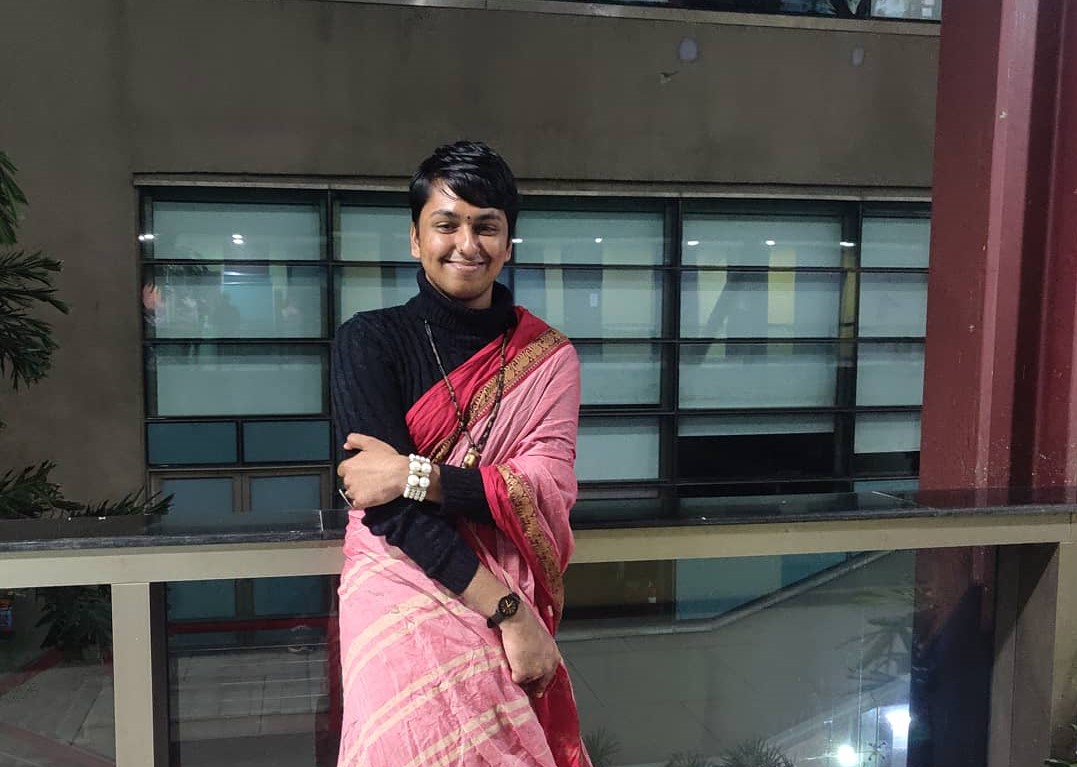 “We are used as tokens.”- Kanmani Ray

September 6, 2020, marks the second anniversary of the landmark Supreme Court judgment Navtej Singh Johar v Union of India. From Naz Foundation to Kaushal to Navtej, the journey to freedom faced its highs and lows. The fight persevered and won this battle of love. The Leaflet’s Special: Two Years since Navtej Johar case describes the journeys that led to the Navtej Johar case, and the journeys after it. KANMANI RAY, Trans activist and law student in Delhi, speaks with MISBAH RESHI about the travails of life in post-Navtej Johar India and the need to reform law schools.

How trans-inclusive or exclusive is the social and educational culture at law schools?

I did not see any dynamic shift in the behavior of people once the Navtej case came out. Law school was not a welcoming space for me. I felt scared the first time I wore a saree in college. People were pointing and laughing at me.

Once you are seen in a gender non-conforming manner, then they start passing transphobic slurs. Across class differences, professions, whether it is students, teachers, and non-teaching staff, everyone stares or mocks.

A discussion was organised by the Law Faculty right after Navtej Johar judgment and I was invited to moderate the discussion. As I was walked towards the room a group of boys loudly commented, “yeh jaise log bhi idhar aa gaye hai, aise logon ko nachake dekhte hai”, (“now even such people have started coming here, we will make the likes of them dance”).

My identity as a transwoman is fetishised, visualised and at the same time invisibilised.

They made this statement with impunity, knowing fully well that there will be no action against them. It is as if they had more of a right to be there than me. My identity as a transwoman is fetishised, visualised and at the same time invisibilised.

How do you see the inclusion and exclusion play out in the legal curriculum of law school?

The NALSA judgment came out in 2014, but professors still fail to be trans inclusionary in their classrooms and in their method of teaching. The Family Law curriculum works with the gender binary. Teachers more often than not refuse to engage with questions raised about queer and trans persons. There is a Madras High Court judgment, Arun Kumar and Sreeja versus The State, wherein Sec 5 of the Hindu Marriage Act was interpreted to include a transwoman within the meaning of ‘bride’. How many law schools include that in the syllabus, or how many teachers even mention it while teaching?

While studying the Indian Penal Code, we are not told about Anamika versus Union of India, where the Delhi High Court held that Section 354A extends to transgender victims of sexual harassment. We are not taught the NALSA judgment even though it is a landmark judgment and if taught, then it is barely given any attention. A professor in my college told me that the NALSA judgment is just about hijra people. We are not even taught that as per the judgment’s reading of the Advocates Act one can wear whatever within the uniform of the court.

In classroom discussions, there is the casual distancing of transgender persons. We are referred to as “these people” or “you guys”. This is how othering happens.  If we are taught about trans rights, then our syllabus should also include papers written by transgender persons. In terms of the infrastructure, do you think law schools respond well to the needs of transgender students?

From Freshers to Farewell functions, everything is in binary- Mr. Fresher and Ms. Fresher. There is no Mx. Transgender persons won’t be allowed to participate or judged fairly.

In terms of basic infrastructure, there are no gender-neutral washrooms. Transgender persons are forced to use binary washrooms. It is one thing to not provide for students, there is also no provision for trans teachers or guests who are invited to speak.

A washroom doesn’t solve everything. Bhaskaracharya College in the University of Delhi has a gender-neutral washroom but there is no transgender person who has joined the college. The issue will not get resolved with washrooms and hostels, there is a need to formulate concrete policies that are also implemented by law schools.

Transgender Persons (Protection of Rights) Act (Trans Act) and Draft Rules mention the setting up of a committee in all educational institutions which will address grievances of transgender students.

How do you think law schools can be improved in order to be made more accessible and inclusive for transgender students?

First, it is important to improve the infrastructure by having gender-neutral washrooms and hostels. Secondly, it is important to have policies in place which allow transgender persons to access law schools. There is a need for scholarships that can be availed by transgender students as many do not have the funds to access higher education. It is also important to have in place affirmative actions, such as reservations to ensure penetration in law schools.

Gender sensitisation should be part of the curriculum. Students should be taught that gender identity-based bullying constitutes ragging under UGC norms. It is important to set up committees that work continuously towards ensuring a safe space and providing equal opportunities. It is going to be two years since the Navtej Singh Johar v. Union of India judgment. What changes, if any, have you witnessed since the decision came out and how do you think it has affected the trans community, specifically in educational institutions?

In my opinion, nothing much has changed on ground post the Navtej Singh Johar judgment. Social hostility against transgender persons has not gone down. There is still a lack of resources and governments don’t seem to be implementing the judgment in any substantive manner

The Navtej Johar judgment is only about LGB persons. Transgender persons are being excluded from the conversation.

The priority of the movement since the judgment has not been to ensure basic healthcare and other such facilities or build solidarities with other movements – like becoming anti-caste.

The focus now is on the right to marry and right to privacy– this seems like a demand by the privileged as there are many without a house, healthcare, and other such basic facilities. Two years down the line, sex workers, transgenders are excluded and marginalised. We are used as tokens.

There is no doubt that the judgment needs to be celebrated, but we need to introspect on our next plan of action.

The focus now is on the right to marry and right to privacy– this seems like a demand by the privileged as there are many without a house, healthcare, and other such basic facilities.

What do you think will be implications of the new Transgender Persons Act on the transgender community in India?

Laws come and go but with the coming of the Trans Act, certain kinds of mobilisations have become possible- we all are coming together to oppose it. There is no doubt that the situation has regressed when compared to the NALSA judgment. Under the NALSA judgment, there was no medical basis for gender identity but this was changed by the Act.

Under Sec 7 of the Act, one cannot change their second name- which means caste surname remains. This sort of casteism is allowed to exist and perpetuated. For many transgender persons who leave their abusive families, carrying the family name can be triggering.

The Act is like an upper-caste Hindu parent who says they know better than you and want the best for you.

Many transgender persons rely on daily wages or have seasonal employment. To make gender identity dependent on expensive surgery is extremely problematic.

For all provisions on affirmative action, the Act provides only suggestions. The Act is like an upper-caste Hindu parent who says they know better than you and want the best for you. In reality, they will do what they want not what we want.

For the transgender community, this is yet another law. This will lead to more stereotypes and an increase in transphobia. The biggest and the most worrying implication of the act is that it takes away the right to self-identify, the absence of which will render transgender persons more vulnerable.