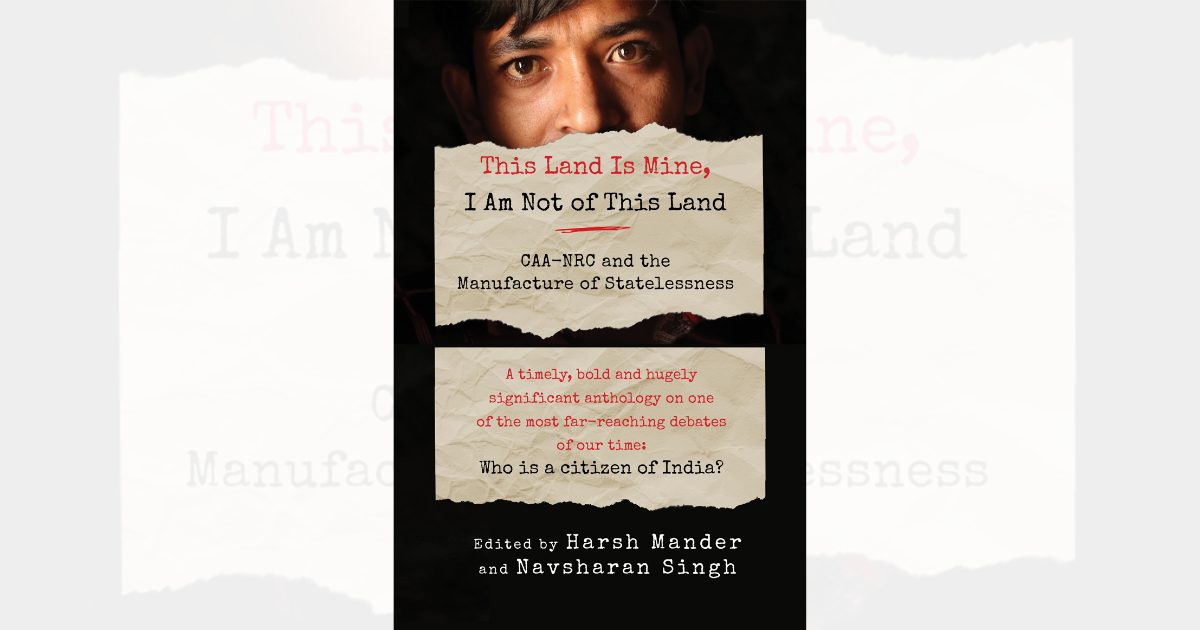 ‘This Land Is Mine, I Am Not of This Land – CAA-NRC and the Manufacture of Statelessness’: book review

During a time when Assam is witnessing a violent eviction drive against its religious and ethnic minorities as well as routine injustices at the hands of its foreigner tribunals and the Assam Border Police, ATREYO BANERJEE reviews the recently-published book ‘This Land is Mine, I am not of this Land – CAA-NRC and the Manufacture of Statelessness’, edited by Harsh Mander and Navsharan Singh, which clearly states out the manner in which NPR-NRC-CAA triumvirate seeks to perpetuate oppression, and explains the nuances which make the CAA egregious and more than just an anti-Muslim law.

THE moral turpitude of the Citizenship (Amendment) Act, 2019 (the “CAA”) has been well documented, especially by academics, lawyers and civil society organisations through scholarship and legal advocacy. Whereas, the body politic in general has, through large scale protests cutting across religious and class lines hitherto unprecedented in independent India, voiced its stance as well.

Also Read: CAA 2019 and the Spectre of National Citizenship

In this context, comes the book ‘This Land Is Mine; I Am Not of this Land: CAA-NRC and the Manufacture of Statelessness’, edited by social activist Harsh Mander and feminist researcher Navsharan Singh, breaking new ground in scholarship by bringing together voices from such varied disciplines as history, law, poetry and philosophy to examine  fractured questions of citizenship and belonging, and – as Mander puts it – the evolution of India, into a muscular, wrathful, inhospitable, majoritarian and resentful nation.

In this provocative and poignant collection of essays, the nuances and subtleties with which the National Population Register (NPR), the National Register of Citizens (NRC) and the CAA mechanism is proposed to be used to further mass disenfranchisement, detention and (probable) deportation is explored.

Also Read: The many texts and subtexts of the CAA, NPR and the NRC

Using authentic voices from Assam, including those of poets and activists – Chan Miya, Khabir Ahmed, Rehna Sultana, Hafiz Ahmed, Shalim Hussain, Abdul Kalam Azad and lawyer Aman Wadud, amongst others, the book explains the prejudices faced by the Miya community in Assam, and the brutal onslaught by the Indian State in firstly, weaponizing the Miya identity and secondly, exterminating the community using the state apparatus.

The immediate image that came to my mind on reading this book was that of an assembly line. The production process comprising of the NPR-NRC-CAA chronology, moving neatly into the sequencing of using courts, tribunals and the police to legitimize state violence. The coup de grace being the ‘mass production’ of foreigners from erstwhile citizens.

The book explores this well-oiled assembly line through its four parts. The first part captures the manner in which citizenship has evolved in independent India. It asks difficult questions such as: Can citizenship in the sub-continent be confined within permeable borders? How is ‘good’ citizenship differentiated from ‘bad’ citizenship? Is citizenship performed or is it premised on vintage and inaccessible documents?

Also Read: A Brief Explainer of the Combined Effect of the NRIC and CAA

In addition to this, the value that citizenship serves a totalitarian state is examined. Political scientist Anupama Roy writes about the idea that citizenship as a legacy of descent and ancestry “transmits the idea of blood as an organizing principle of a bounded political community and citizenship as inheritance”.

The salience of citizenship as inheritance is aptly seen in Assam. The bitterness with which religious and ethnic minorities are subjected to violent evictions with their bodies bludgeoned is part of a continuum where the state has treated its minorities with impunity and contempt.

Part II of the book dives straight into this and traces the trail of citizenship and its contestation within Assam.

Also Read: A government which keeps its promise: eviction, impunity and displacement in Assam

The question of belonging and citizenship in Assam is deeply complex. This question is explored through first understanding the specific socio-political reasons due to which immigration into Assam took place. This involves a critique of the colonial empire which originally transferred large swathes of labour from the surrounding regions of Bengal into Assam to work the lucrative tea plantations.

It proceeds to examine the specific amendments made to the Citizenship Act, 1955 which finally led to the CAA. Importantly, although tacitly, the book recognises the role played by the Indian National Congress government which had originally introduced an amendment in 1986 requiring that a person born in India must have at least one parent as an Indian citizen, which is the origin of citizenship as inheritance.

Assam and the dark side of humanity

Seeing the triumvirate of the NPR-NRC-CAA through the prism of Assam has particular currency.  Previously, the debate on the CAA focused on the larger constitutional questions regarding its legality and ability to pass judicial muster.

Also Read: The Debates over CAA

This book in general, and Part II in particular, examines the oppressions which befall a group of people who face exclusion in light of arbitrary citizenship determining processes. Take for instance, the NRC in Assam which excluded 1.9 million people. After the publication of the Register, there were calls to recollect data from some specific districts in Assam, home to its ethnic and religious minorities – the Miyas.

The book explores the specific oppression faced by this community. Abdul Kalam Azad writes on this to say “My efforts to be Axomiya were not enough, my accent was not sure – I was reminded that the dialect I spoke at home was filthy”.

The Miyas being inhabitants of the land for eons faced brutality and violence from the state and also from the elite classes who otherize the Miya identity. State violence is brought out in the book by probing the questionable standards of evidence to gauge citizenship which has been furthered by the Supreme Court of India.

Law professor Mohsim Alam Bhat calls this the “language of exceptionalism” – where the court relies on unreviewed and unvetted literature and declares immigration to be tantamount to ‘external aggression’ (as was done in the Sarbananda Sonowal case). This was also the case which legitimized the functioning of the kangaroo court-like ‘Foreigner Tribunals’ in Assam.

Also read: Suspicion as evidence: The Supreme Court’s Sarbananda Sonowal judgments, and the chimera of legitimacy of foreigner tribunals

Aman Wadud, a lawyer working on ensuring proper legal aid to litigants before these tribunals, incisively explains the fault lines in the functioning of these tribunals which disregard procedural safeguards and routinely dehumanise persons who are alleged to be “foreigners” by the Assam Border Police.

Mander poignantly notes that “we are joining a world which is complacent in its comfort and vulgar in its overconsumption” ­while taking the reader through what he calls the “dark side of humanity” – the detention centres in Assam. These detention centres, which till recently have been claimed to not exist by the Prime Minister, are couched within prisons.

Mander and his team visit these detention centres and document the precarious lives of the detainees condemned as foreigners through a process which is shambolic and threadbare.

In a sense, the Prime Minister is correct that these centres do not exist – in so much as they are invisibilised from our collective conscience in what Mander aptly describes as “violations of elementary justice”.

Using the example of Assam, the book proceeds to highlight the implications of the CAA and the impact of a pan-India NRC on vulnerable and impoverished citizens. The book debunks the myth that the CAA seeks to provide a humane framework for non-Muslim refugees from Muslim-majority countries.

It discusses the manner in which India grants protection to refugees under the dual regimes of refugee protection with the Indian government and the United Nations High Commissioner for Refugees sharing the responsibilities of refugee mapping.

Although far from perfect, this dual regime has previously ensured protection for refugees from Tibet, Sri Lanka, Afghanistan and Myanmar previously. India is a signatory to the Global Compact on Refugees, 2018, and a holistic and benevolent refugee protection and asylum law would be a welcome move.

Yet, ironically, the CAA is the first “refugee protection” law in India and as the book notes, this parochial law does not provide protection to refugees at all. Instead, it sanctions the idea that India is the natural home for some, while alien to others.

In its closing chapters, the book argues that mass disenfranchisement taking place in Assam will be emulated across the country. In light of the assurances given towards how the NRC will not harm citizens, the book brings out the potential for violence within the NPR.

Given that citizenship now has to be proved through vintage documents, this book argues that there is a potential for the “banal legalization” of peoples’ lives – being perpetually trapped in a maze of courts, bureaucracy and detention centres.

Also Read: The Elephant in the Room is NRC

As diverse as the chapters are, the larger cross-cutting issue of the pathologisation of the identities of ethnic and religious minorities links them. Previously, the arguments against the NPR-NRC-CAA trinity have been premised on the subjugation of Muslims.

This book adds to that, and provides perspective on how a forceful and ambiguous documentation of peoples’ lives disproportionately impacts women, cyclical migrants, members of the transgender community, members of the Dalit-Bahujan community and so on.

It extends the debate beyond simply the narrative, i.e., the CAA is an anti-Muslim law, and focuses on the potential of large-scale impoverishment which will be an outcome of the NPR-NRC-CAA exercise.

The book bemoans the challenges to what was an inclusive and welcoming India. The arguments against the conducting of the NPR-NRC-CAA are powerfully articulated and, this is a must read for persons looking for an entry point into understanding the vexed idea of citizenship in the Indian subcontinent. The book would also be appreciated by those seeking to explore the nuances of the citizenship question and understand the larger oppression which the NPR-NRC-CAA seeks to perpetuate.

Where the book succeeds most brilliantly, is in soundly disproving the avowed benevolence of the CAA and showing that the Indian State, instead of standing above and independent of disparate group identities, is itself metamorphosing into a group identity to which citizens must confirm or risk violence.

(Atreyo Banerjee is an advocate practising across courts in New Delhi and West Bengal, with a keen interest in issues of citizenship and statelessness studies. The views expressed are personal.)