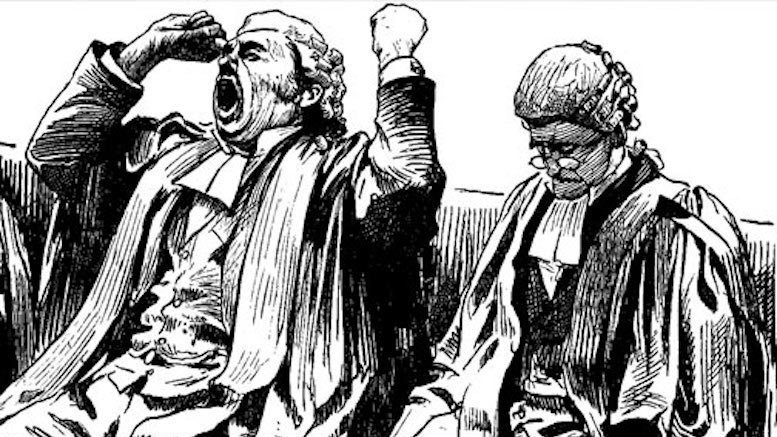 The lessons I learnt

When my “seniority” at the bar was all of eight working days, my senior felt that I was senior enough to be let loose before a learned magistrate presiding over what was known as the ‘Killa Court’ to “take a date”.
In those days that was the only dating we juniors could manage.

In a pioneering gender change operation executed by the powers that be, Queen Victoria became “Chhatrapati Shivaji Maharaj”.
Mercifully, “terminus”, being neutral, though English, remained unaltered.

We had our chambers near the High Court and the Esplanade Court is just two bus-stops away.
The elderly junior in the chamber who seemed to be a permanent fixture, had taken it upon himself to pepper me with useful tips almost on a daily basis.

Once he came to know that I was to independently go to Esplanade Court, he told me that our senior would give me 100 rupees to attend to the matter and presume I would cab it to Esplanade Court and back.
The one way fare was just 12 bucks in those days.
So 24 rupees conveyance allowance was for the trip.

He said that if I go by bus,whatever I saved would be mine for keeps.
I asked him what if I walked?
He said “You are cleverer than I thought”
I remember that as it was the first compliment which I received in my career as a lawyer.

Then the elderly junior told me to reach the magistrate’s court before the learned judge took his seat and to approach the table of the court associate or “shirastedar” as he is known.
He said the upper drawer of the shirastedar’s desk would be half open and the shirastedar would not even look at me.
He said a ten rupee note was to be slipped into that half-open drawer for the shirastedar to look at me and ask
“Kaay Paahijey?” (What do you want?)

Then I was supposed to give him a small chit with the number of our case written on it and tell him that we wished to take a date.
The daily list is with the shirastedar and he would mark our case on it.
Once the learned Magistrate took his seat, the roll call would start and when our case is called out I just have to say “I am appearing for the accused and I need a short date as my senior is held up in the High Court”

All this seemed fairly simple and uncomplicated.
My chamber colleague said if I walked both ways I would straightaway make 90 rupees for that one appearance!
He made it sound as if I would strike a jackpot but who was I to complain?
I was just happy to be getting an “appearance” before a real judge in a real court even if it was only to take a date.
Before this, all my appearances had been in moot courts.

Later on, I learnt that especially for lawyers practicing before various courts and tribunals, like my senior used to do, a “date taking junior” was a most valuable asset to possess.

Smart juniors were dangerous..and to be avoided.
They would insist on reading the brief before going to the court and be ever-ready and willing to start arguing a matter at the slightest opportunity which presented itself, fortuitously or otherwise.
And the unfaithful clients were most likely to tempt smart juniors by approaching them directly for their future cases.

Intelligent juniors did not last.
They learnt the tricks of the trade and left their seniors as soon as they sensed an opportunity to set up their own shop independently.
More often than not they walked away with some of their senior’s clients.
The priceless date-taking juniors, on the other hand, never progressed beyond the date-taking stage.
They were happy to go to the court blank, stay blank and return blank from attending matters.
They made no attempt to either read the briefs or to discuss anything with the client.
They got handsome fixed salaries commensurate with their inertia and utility.
A date-taker did not lie when he mumbled “I have no instructions” like a mantra day after day, in court after court.
In short, date-takers were indispensable to successful seniors with a varied and large practice.

My senior chamber colleague had been a “date-taking junior” for 30 long years and though weak in health was still going strong in utility.

The moment he realised that I had no intention of being a date-taker, he was overjoyed..and most co-operative in assisting my quick exit.
I was just going to be a guest in the Chambers and would pose no threat or competition to him.
Therefore, he had a vested interest in teaching me the “tricks of the trade” as soon as possible and to help me branch out on my own.

Coming back to my first appearance, I did as I was told.

But as I had walked, I did not have any change in my pocket.
Apart from the 100 rupees note my wallet just had a 20 rupees note to cover food for the day.
I dutifully slid that note into the half-open drawer of the shirastedar.

It had an electric effect.
I had paid double the fixed rate of 10 rupees in my very first appearance!
The shirastedar had a big smile on his face and enquired about me, my senior, my future plans etc.
I was pleasantly surprised.

The shirastedar then conducted a quick tutorial for me.

He told me that since I had given 20 rupees, he would call out my matter first and “relieve” me in five minutes.
He noticed I was a bit nervous and said he would manage everything.

He was wearing big dark sunglasses.
I was just beginning to wonder why when I heard one lawyer ask another: “Tyanche doley aale ahet ka?” (Literally, “Have his eyes come?”)
What he actually meant was “Is he suffering a bout of conjunctivitis or sore eyes” to be wearing those big, dark glasses?
Another lawyer,seemingly a regular there, replied that this magistrate liked to doze off in the post-lunch afternoon session when concluding submissions in trials would start.
Behind these sunglasses no one could make out whether his eyes were open or closed.
I had learnt something new.
They didn’t teach this in Government Law College.

The shirastedar sought the magistrate’s permission to start the proceedings for the day.
But the learned Magistrate said:
“Wait, where is that matchbox which was here?”
The ushers and the shirastedar scrambled around looking for it..and finally found it.
They handed it to the magistrate.
For a moment I thought he would now ask for a cigarette and have a smoke.

But he just settled down to use the matchstick as a probe into his ear perhaps to quell an irritating itch.
Then he signalled with his free hand to the shirastedar that the board could start.

The shirastedar cleared his throat and as per his 20 rupee promise called out our case number and my senior’s name.
He gestured that I should push through the crowd of assorted black coats and stand right in front of the learned Magistrate.
I did as I was directed.

After that, the shirastedar did not allow me to even open my mouth.
At breakneck speed he gave the learned magistrate my brief biodata, informed him that it was my first time in court, told him the reason I needed some time, gave him the gist of our case and then even suggested the next date after consulting his diary!

In fact, he had asked me which date I wanted and was now pitching that very same date from his side.
It was a virtuoso performance!
The learned magistrate just nodded and did what the shirastedar had literally ordered.
The shirastedar then told me I could leave and go back to the High Court.

But the Magistrate suddenly said:
“Today is his first court appearance. Let us wish him best of luck.”
Many lawyers present in the court then shook my hand and wished me.
I bowed to the learned  magistrate and said “I’m much obliged your Honour”.
The learned magistrate immediately signaled me to stop.
“You must learn how to address magistrates, district judges and high court judges,” he said.
I could not fathom what mistake I had made.
I just apologised:”I’m sorry your Honour”.
The magistrate continued: “Remember young man, in our State only the High Court judges are addressed as “Your Lordship” or “My Lord”, the District Judges are called “Your Honour” and we magistrates are to be addressed only as “Your Worship.”

“So remember this:
In my court you don’t “Honour” me, you “Worship” me
Samajla(understood)?”
I bowed again and said:
“Yes, your worship, I won’t forget this lesson now”.
Thus I learnt another important lesson they had not taught in Government Law College.

As I exited that heritage building and started walking towards the High Court, I still had the crisp 100 rupees note given by my senior in the pocket of my black jacket!
It was mine for keeps..but got spent in a day or two.

The invaluable lessons I learnt that day have nevertheless remained with me till this day.