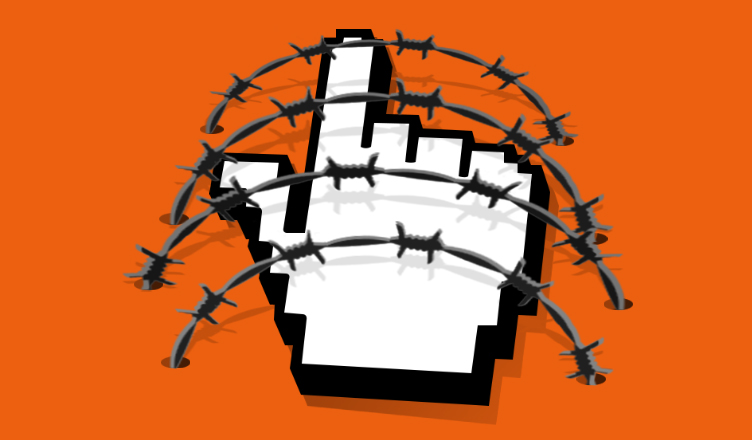 The author investigates the constitutionality of the internet shutdown imposed in Kashmir. He argues whether the communication restrictions hold up to the test of ‘reasonable’ envisaged under Article 19(2) of the Constitution of India.

Any discourse on Kashmir and its people, from an outsider, no matter where that outsider lies on the spectrum of ideologies or what her understanding of nations and nationalism is, must be mindful of the fighting chance she’s been given in terms of her rights, in the present times. Just by virtue of being a non-Kashmiri. Justice for the people of Kashmir has been almost Kafkaesque ever since the inception of their struggle. However, there are two unprecedented challenges being faced by them currently. The first being the internet shutdown in Kashmir, the longest ever imposed in a democracy. The second is the challenge presented by COVID-19. Unfortunately for its people, these two challenges have become horridly intertwined.

Before discussing the implications of these two challenges being faced in simultaneity, perhaps some background in freedoms is necessitated. Article 19(1)(a) of the Constitution of India guarantees all citizens the right to freedom of speech and expression. However, such freedom under Article 19(2) is subject to reasonable restrictions imposed by the State in the interests of, among others – the sovereignty and integrity of India, the security of the State and public order. Our illustrious Constituent Assembly Members had raised concerns while deliberating on the Article, as it was called then the Draft Article 13. As to Draft Article 13(2) restrictions, Damodar S. Seth was of the opinion that:

“…to suspend civil liberties is tantamount to a declaration of martial law. Even in the United States, civil liberties are never suspended. What is suspended there, in cases of invasion or rebellion, is only the habeas corpus writ. Though individual freedom is secured in this article, it is at the same time restricted by the will of the legislature and the executive which has powers to issue ordinances between the sessions of the legislature almost freely, unrestricted by any constitutional provision. Fundamental rights, therefore, ought to be placed absolutely outside the jurisdiction, not only of the legislature but also of the executive.”

Of course, the Article as it stands today speaks of restrictions being reasonable, yet there rings a  modern age truth to the particular concerns of our Constitution Drafters – across India, but especially in Kashmir. In the present times, the pandemic has rendered the legislature dysfunctional and has drastically limited the functioning of the judicial system, to say the least. As a result, the executive has been bestowed with sweeping powers. Whilst this is true across the country, it glaringly pronounced in Kashmir where indigenous political leaders have been placed under preventive detention following the abrogation of Article 370; stringent security measures and now the lockdown, have curbed physical manifestations of protest; and internet restrictions have stripped the people of one of the few basic mediums of speech and expression.

“As a result, the executive has been bestowed with sweeping powers. Whilst this is true across the country, it glaringly pronounced in Kashmir where indigenous political leaders have been placed under preventive detention following the abrogation of Article 370”

In fact, in January the Supreme Court in the case of Anuradha Bhasin declared internet to be a fundamental right. However, the GOI circumvented compliance by providing 2G internet. Herein, it relied on its narrative that the internet is a means for the thriving of unscrupulous, ‘anti-national’ and ‘terrorist’ elements and that any restrictions imposed are thus in the interests of the sovereignty and integrity of India and the security of the State.

There was never any doubt that the state has the power to put certain restrictions on fundamental rights. The question was whether the restrictions in Kashmir were reasonable. The GOI in its argument before Court stated that since August 5, 2019, 108 terrorist attacks have taken place in Kashmir. How is that reconcilable with the fact that till January 2020, there was a complete internet blackout and yet the attacks continued?

“….. since August 5, 2019, 108 terrorist attacks have taken place in Kashmir. How is that reconcilable with the fact that till January 2020, there was a complete internet blackout and yet the attacks continued?”

GOI has in this regard, failed to establish any proximate or direct nexus between the access to internet and terrorist attacks. By GOIs own admission since 1990, there have been 71038 terror incidents. But, from 1990-2000, the worst period of the conflict, there was no internet in Kashmir, in fact mobile phone services were introduced only in 2003. After the internet was introduced there have been 181 internet shutdowns in Kashmir, and yet, terror incidents remain consistent.

In fact, there is no better example of executive overreach being legitimised in Kashmir, than our Supreme Court letting the executive itself be the assessor of whether 4G internet speed should be restored therein, through a special committee headed by the Secretary of the Union Ministry of Home Affairs! It is most unfortunate that when it comes to balancing a perceived threat to national security and the basic civil liberties of the citizens of our nation, the judicial system has no qualms about authoring preachy judgments that merely defer authority to the executive.

“In fact, there is no better example of executive overreach being legitimised in Kashmir, than our Supreme Court letting the executive itself be the assessor of whether 4G internet speed should be restored therein.”

In Superintendent, Central Prison, Fatehgarh v. Ram Manohar Lohia, a five judge bench of the Court mandated that in order for a restriction to be reasonable, there has to be a proximate connection with public order and not a far-fetched, remote or hypothetical one. While the law provides for prior restraint and censorship of speech, provided there is a proximate nexus between free speech and public order, the law does not empower the state to shut down completely, the very means of making free speech.

The state can make an argument that, at times, there may be a proximate nexus between free speech and threat to security, for example a provocative hate speech on the television that leads to communal riots. However, there can never be a nexus, let alone a proximate one, between the medium of television itself and the threat to security. Even during the 1975 national emergency, when the state censored the news, there was no blanket ban on publishing of newspapers.

“However, there can never be a nexus, let alone a proximate one, between the medium of television itself and the threat to security.”

The Constitution only envisaged temporary restriction on speech that threatens security, but not all speech or the medium of speech. The restrictions imposed in Kashmir since August 5th, 2019 have nothing to do with security or public order and everything to do with dissent. Thus, while GOI might have failed to establish a proximate nexus between access to internet and terrorist activities, what has been established, however, is that these internet restrictions have violated the (i) Right to conduct business by destroying the economy and putting an end to sectors dependent on the internet (ii) Right to education as children haven’t been to school in 10 months and there is no possibility of online classes (iii) Right to freedom of speech & expression as people couldn’t post online and the press couldn’t even file reports. (iv) Right to health by drastically limiting the functioning of the healthcare sector in the middle of a catastrophic pandemic.