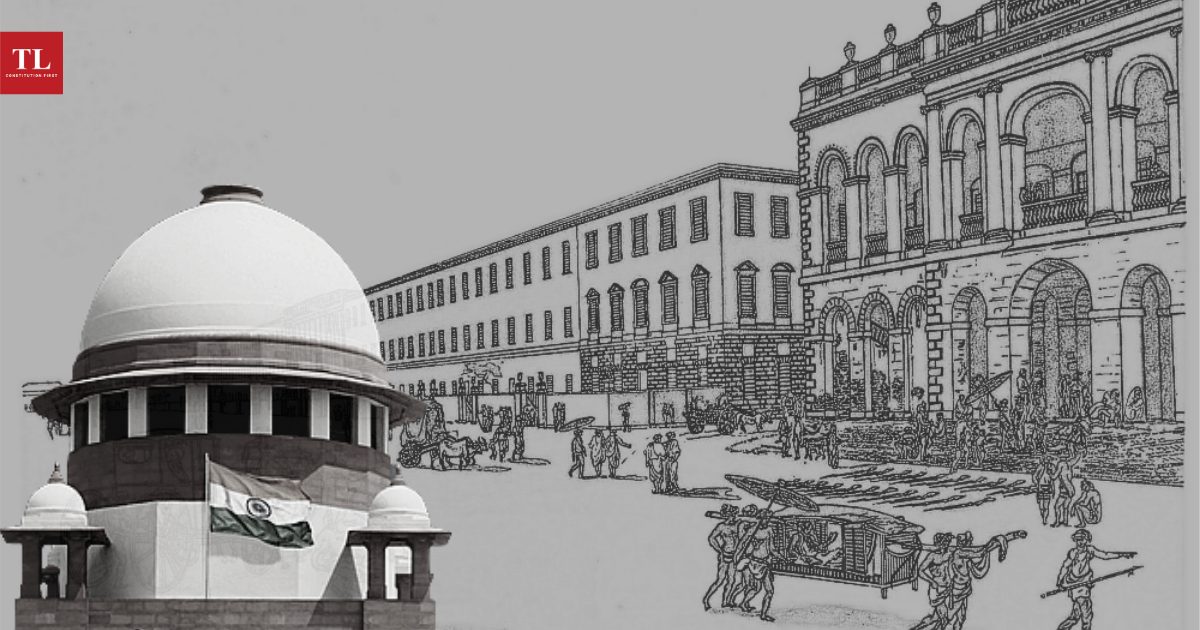 The First Supreme Court(s) Of India

The Supreme Court of India is the highest judicial body of India and is the top court under the Indian Constitution. It has wide-ranging powers and is considered to be one of India’s most powerful public institutions. But it did not start off like this. AFREEN ALAM proffers a brief introduction of the first Supreme Court(s) in India, giving details and context on some key early legislations that led to its formation.

BY the end of the 18th century, the East India Company (EIC) was in a terrible financial situation, primarily due to corruption. The EIC was in great debt and owed money to both the bank of England and the British government. Then British Prime Minister Lord North decided to overhaul the management of the EIC with the Regulating Act of 1773.

The Act was the first step of the eventual government control of India post-1858. It provided a new administrative framework for the EIC. The President of the company in the Calcutta factory, who used to be known as the Governor of Bengal, was made the Governor-General of all the Indian territories of the company. The other governors of Bombay and Madras were made subordinate to him. He had a council of four members.

The Governor-general and council could make any rules, regulations, and ordinances they thought just and reasonable for Calcutta’s order and good governance. Thus, the Act laid down the foundation of central administration in India.

One of the most significant provisions of the Act was establishing a Supreme Court at Calcutta.

The Act was brought about to reform the Constitution of the EIC and reform its government in India; hence the Governor-general, the councilors, the Chief Justice, and other Judges of the newly established Supreme Court were prohibited from accepting any gifts, presents, donations, gratuity or rewards from any person and from carrying on any trade or commerce of any kind for their personal use, benefit or advantage. Any of these above-mentioned persons were to be British subjects and could be tried at the King’s Bench in England if they committed any crime or offence as per the Act against any British subjects or any of the inhabitants of India.

Section 13 of the Act made detailed provisions for the establishment of the Supreme Court. The Supreme Court was to consist of a Chief Justice and Three Puisne Judges. The British King appointed the Judges. A barrister of five years standing was qualified to be appointed as Judges. The judges were to hold office during the pleasure of the crown. The Supreme Court of Calcutta was the first British Court in India consisting of lawyer judges; it was the first court fully independent of the control of the Company’s government in India, and its jurisdiction was extensive. It had five kinds of jurisdiction: Civil, equity, criminal, admiralty, and ecclesiastical jurisdictions. It was empowered to establish rules of practice and process, and do all things necessary for the administration of Justice (according to section 13 of the Act).

The criminal jurisdiction of the Supreme Court extended to all British subjects residing in Kolkata and within the territories of Bengal, Bihar, and Orissa. Only the British people and the servants and persons employed with the company were covered under this jurisdiction. Other natives were not part of the court’s jurisdiction.

The Supreme Court had to follow as far as possible the procedure of the English courts and worked as a court of Oyer and Terminer, and Gaol Delivery in and for the town of Calcutta, the factory of Fort William, and the factories subordinate thereto. The court had no jurisdiction to try the Governor-General and the members of his council or the judges of the Supreme Court except in cases of treason or felony. Mercy petitions were transferred to the Crown Court in England on the recommendations of the Supreme Court.

The Supreme Court, after the enactment of the Act, had no jurisdiction in the concerning revenue, or any act that was done in the collection thereof. The government became independent of the control of the Court in the matter of revenue. The appellate jurisdiction therein shifted to the hands of the Governor-general and his Council, as appeals went from Provincial Courts to the Governor-general and his Council. This Act made the position of the Council very strong so that it could continue to have control over the Indian empire.

A positive change brought about by this Act was to protect the laws and customs of the native people. Section 17 of the Act states that all matters arising out of inheritance and succession to land and goods and all matters of contracts and dealings between the parties were to be decided according to their personal laws, and if the case was between Mohammedans and Hindus, then according to the law of the defendant.

The Supreme Court was authorized to make procedural rules and regulations according to the needs of the people to whom the law was to be applied. Therefore, they were, as far as possible, customizable to their habitat. The rules, regulations were to be laid before the British monarch for their approval, and the monarchy had the right to approve, correct, or reject them.

The Supreme Court at Madras and Bombay These Supreme Courts functioned until 1862 when they were replaced by High Courts at all three places through the Indian High Courts Act 1861.

(Afreen Alam is a Delhi-based researcher and writer.  She is a law student at Jamia Millia Islamia, Delhi. The views expressed are personal.)