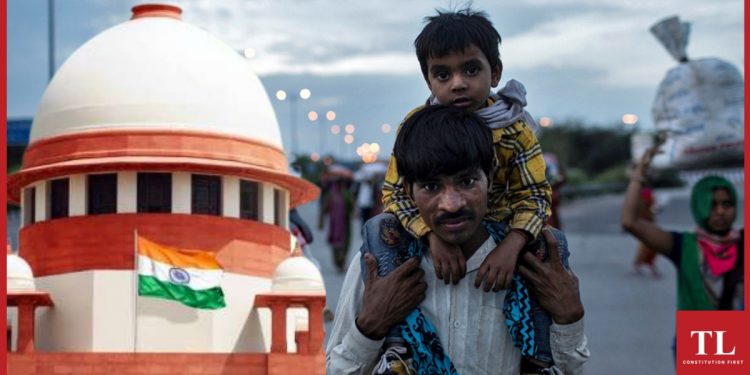 The Supreme Court has disposed of a suo motu petition seeking relief for migrant workers. It has directed state governments to help the workers access existing schemes and some new relief measures. Considering the track record of implementation of its orders so far, the court should have gone for continuous monitoring instead of disposal. As things stand, it may soon end up disappointed by state governments on compliance, writes JAHNAVI SINDHU.

IN June, the Supreme Court gave its final judgment on a fresh plea in a pending suo motu case of May 2020 in which the top court had taken cognizance of the difficulties migrant workers faced during the COVID-19 lockdown. The court directed the Centre and the states to devise and implement schemes to provide migrant workers with ration. The SC also directed the states to run community kitchens and register unorganised labourers to help them access welfare schemes.

However, the SC order is unlikely to change the situation considering how the court conducted its proceedings and the remedies it chose.

The apex court had faced widespread criticism for initially refusing to intervene on behalf of migrant workers, who trudged hundreds of kilometres to their hometowns during the lockdown. The court had cited its lack of competence to intervene and refused to interfere in the functioning of the legislature and the executive.

The government, while imposing a lockdown that closed all avenues of employment for migrant workers, failed to implement social security measures that could have protected their right to livelihood.

While the court was correct in arguing that it could not usurp executive powers in enacting social security measures, it was, with due respect, misleading for the SC to suggest that it could intervene on behalf of migrant workers by only usurping the executive.

The court can play—and has played on numerous occasions—a supportive and supervisory role in protecting basic rights, like the right to food, health and shelter, without transgressing into legislative or executive turf. In such cases, the court engages in dialogue with the government to devise welfare schemes or implement existing legislation or schemes, which often only exist on paper due to government apathy.

The court can also identify what stands in way of implementation of welfare schemes and work around issues that plague the bureaucracy.

The court’s implementation of welfare schemes and statutes need not only be limited to providing immediate relief. It can also extend to ensuring that the state puts infrastructure in place to avoid recurrent problems.

In Swaraj Abhiyan vs Union of India, the petitioners had sought relief in drought-affected areas under the National Food Security Act. The court ensured that legally mandated food security entitlements are implemented and directed the defunct State Food Commissions to be set up.

In the present case, several interveners argued that welfare legislation and schemes for workers are not lacking but their benefits were not reaching migrant workers. The workers had to register under the Unorganised Workers’ Social Security Act, 2008, and other laws to avail the benefits.

To address the shortcoming, the SC directed state governments on 9 June 2020, to complete the registration of migrant workers. However, when several states did not comply, the court listed the case again in July and September 2020 and noted their failure to file compliance affidavits.

With the first wave receding, the case related to migrant workers appears to have lost priority in the Supreme Court. As per its website, the case was not listed after October 2020 until May 2021, when an intervener filed an application seeking relief for migrant workers as the second wave kicked in.

In the hearing held on 13 May, the court noted that many states had still not filed affidavits although eight months had passed, and directed them to do the same. In subsequent hearings, the court noted that a national portal to register workers had been initiated but wasn’t yet operational. The SC took strong exception and directed the government to set up the portal by the end of July.

While the court picked up where it had left off, migrant workers had already lost valuable time and income. The hardships they faced throughout the second wave could have been alleviated to a great extent if the court had adopted a more proactive approach to ensure its orders were complied with promptly.

Ultimately, the court issued extensive directions to the Central and state governments in its final judgment on running community kitchens, providing food grains, registering workers and implementing the ‘One Nation, One Ration Card’ scheme.

This approach—to deliver a final judgment with hopes of compliance—is one judicial way against state inaction. A contrasting approach is to apply the writ of ‘continuing mandamus’, where the court leaves a case pending and monitors compliance with its orders over time.

Scholars who have studied the SC’s approach to enforcement of socio-economic rights, such as Poorvi Chitalkar and Varun Gauri, have shown that the compliance-monitoring approach goes a long way in getting the aggrieved effective remedy against state inaction.

Using ‘continuing mandamus’ a court can monitor compliance through reports from government officers instead of disposing of a case. This dialogic approach has helped foster an understanding between the judiciary and the executive of a problem and its possible solutions. Where lack of compliance with judicial orders is attributable to indifference rather than genuine difficulties in implementation, the court has resorted to adversarial orders such as sanctioning officers and imposing costs.

In the final judgment passed in the suo motu case concerning migrant workers, the court repeatedly attributed the hardships of workers to the “lethargy” and the “lackadaisical attitude” of the governments involved. Indeed, the governments have also demonstrated they are unlikely to even file an affidavit unless the court sanctions them.

Despite being aware of the attitude of the governments, the court did not ensure compliance. In not utilising the range of options available with it, the court runs the risk of having even its final directions ignored. One cannot help but wonder if the case for migrant workers will have to present before the court yet again especially if there is a third wave.

(Jahnavi Sindhu is a Delhi-based advocate and visiting faculty at the National Law School of India University, Bangalore. The views expressed are personal).