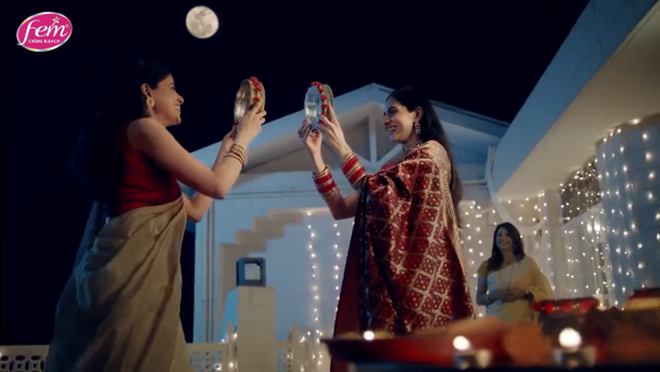 The withdrawal of Dabur’s advertisement due to intolerance of a state Minister and social media trolls should make all of us introspect on succumbing to extra-Constitutional restraints on free speech, argues PRASHANT PADMANABHAN.

RECENTLY, Dabur withdrew its advertisement of a lesbian couple celebrating the Hindu festival karwa chauth, after Madhya Pradesh Home Minister Narottam Mishra warned of legal action if the company didn’t withdraw it. The advertisement drew flak from conservative sections in the social media as well.

This incident appears to have provoked even judges of the Supreme Court, who are known for their reticence on public controversies on the ground that some of them may land in the court for their adjudication. One of them, Justice D.Y. Chandrachud, known for his liberal credentials, used his speech titled ‘Empowerment of Women through legal awareness’ – at the launch of a nation-wide legal awareness programme, conducted by the National Legal Services Authority (NALSA) in collaboration with National Commission for Women and UP State Legal Services Authority – to express his disapproval of the growing intolerance from the fringe elements, who use extra-Constitutional methods to silence dissent.

Justice Chandrachud made these remarks:

“Just two days ago, all of you would know of the advertisement that a company was required to pull down… it was an advertisement for ‘karwa chauth’ of a same-sex couple… it had to be withdrawn on the ground of public intolerance….Our Constitution is a transformative document that sought to remedy the structural inequalities rooted in patriarchy. It has become a powerful tool to secure material entitlements and provide public affirmations of dignity and equality of women.”

Twitter was abuzz with comments soon thereafter. Justice Chandrachud who, as part of different benches, upheld the fundamental right to privacy, decriminalized adultery as well as adult consensual same-sex relations, allowed women’s entry in Sabarimala, and granted permanent commission to women in the Indian Army, received a fair amount of support from the liberal sections for his off-the-court observations on the withdrawal of the Dabur advertisement. Justice Chandrachud, however, must have known that any such intervention by a sitting Judge outside the court would trigger an equal amount of criticism in the social media from those who disagree with him.

The limits of his office as a Judge perhaps prevented Justice Chandrachud from saying anything further on the subject. But that should not prevent the rest of us from speaking out on the issue.

The major argument of those who oppose the advertisement is that same-sex marriage is not yet legally recognized in India; therefore, a lesbian couple celebrating karva chauth is not permissible. Such critics also argue that the advertisement demeans age-old customs.

Also read: How Resolve of 2 Girls to Love and Live Together Led to Landmark Ruling in Favour of LGBTIQA+

The purpose of this article is to articulate six reasons why Justice Chandrachud’s concern over public intolerance should make us question our complacency with the fringe groups who set the pace for public discourse and which is likely to limit the scope of our free speech guaranteed by the Constitution.

The question of legal recognition of a marriage between a same-sex couple is pending consideration before the Delhi High Court. As on date, it is not prohibited. The statement that lesbian marriages are ‘not yet permitted’ is based on the wrong assumption that the repository of liberty of citizens is enacted laws alone. Liberty is inherent in individuals, and enacted laws can merely recognize it.

‘Living together’ is recognized by Indian courts. Therefore, no one can raise the issue of legality, if both the willing parties are adults and belong to the same sex. If a same sex couple engage in a private ceremony and call it marriage or by any other name, it is neither impermissible nor does it require State sanction. It is only the definition of ‘marriage’ under different statutes, with its consequent rights and liabilities, which is a concern for the courts of law.

Therefore, the argument of some on social media that same-sex marriage is not yet recognized and therefore the lesbian couple celebrating karva chauth is not permissible, is legally incorrect.

Also read: Why Same-Sex Marriages Must be Judged at the Constitutional Altar

The social media criticism that the advertisement demeaned an age-old custom is based on the wrong premise that ‘what is not acceptable to the majority, should not be part of the culture’. Individual liberty to believe and propagate any faith, celebrate any festival or custom in their private lives without harming anyone else, need not meet any rigid definition as to how that custom is to be celebrated.

The advertisement depicts the celebration of a festival by a same-sex couple. It is in the public domain which comes within the purview of free speech. If the couple are equal citizens, they do have the right to free speech.

First and foremost, the withdrawal of the advertisement by Dabur – in response to online trolls and the Minister’s threat – should make all of us ask whether same-sex couple are equal citizens. A reference to the Supreme Court’s landmark judgment in Navtej Singh Johar vs. Union of India (2018), would answer this question. The court observed in this case thus:

“In seeking an adjudication of the validity of Section 377, these citizens urge that the acts which the provision makes culpable should be decriminalised. But this case involves much more than merely decriminalising certain conduct which has been proscribed by a colonial law. The case is about an aspiration to realise constitutional rights. It is about a right which every human being has, to live with dignity. It is about enabling these citizens to realise the worth of equal citizenship. Above all, our decision will speak to the transformative power of the Constitution. For it is in the transformation of society that the Constitution seeks to assure the values of a just, humane and compassionate existence to all her citizens. (paragraph 405, Justice Chandrachud’s opinion) (emphasis added)

Also read: Section 377, 3 years on: Walking down the aisle of history

Since the answer to our first question is obviously in the affirmative, the second question which arises is whether sexual minorities have all the legal rights, including the right to express themselves.

This, in turn, would urge us to answer the third question: If members of the sexual minority have all the legal rights, are they entitled to celebrate festivals, like any other citizen?

When the Supreme Court held that sexual minorities have equal citizenship, the answers to the above two questions also can only be in the affirmative.

The fourth question to ask in this debate is whether the sexual minority should succumb to a majoritarian definition of ‘culture’, that is, what is generally and loosely referred to as “public morality”. Answering this question inevitably involves raising a related fifth question as well:

Whether Constitutional morality and ‘fraternity assuring the dignity of individuals’, support visibility of sexual minority in the public space and cultural events.

“Under a regime of public morality, the conduct of society is determined by popular perceptions existent in society. … Constitutional morality determines the mental attitude towards individuals and issues by the text and spirit of the Constitution. It requires that the rights of an individual ought not to be prejudiced by popular notions of society.” (Paragraph 598) (emphasis added)

In the present context, popular perception about a festival such as karva chauth cannot stand in the way of equal citizens celebrating their liberty, in tune with Constitutional morality.

The debate on the issue would be incomplete without answering the last and the sixth question lurking in our minds:

Does the call for the withdrawal of ‘free speech by sexual minorities constitute intolerance?

It is superfluous to refer to case laws or even sections of law for answering the above question. Democracies function when the freedom of individuals is protected and safeguarded by fellow citizens, instead of being threatened by them.

(Prashant Padmanabhan is an advocate at the Supreme Court. The views expressed are personal.)